‘I Love, You’re Perfect’ Has Changed At MNM Theatre 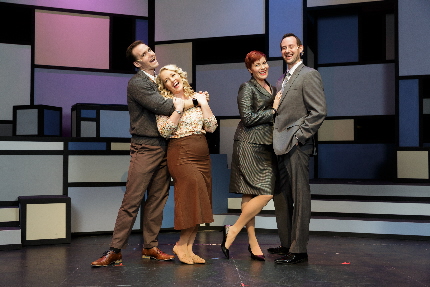 Let’s be brutally honest: If you’re over 40 and you heard that some theater was reviving that chamber musical I Love You, You’re Perfect, Now Change… come on, you said, “Again?”

So here’s the good news, the really good news: Last year, composer Jimmy Roberts and bookwriter-lyricist Joe DiPietro overhauled the 1996 piece and MNM Theatre Company in West Palm Beach is one of the first companies to benefit from the updated lyrics, tweaked book scenes, reordered scenes and two new songs.

The result is a freshness and vibrancy that feels 21st Century while preserving the timeless verities that the original capitalized, becoming the second-longest-running hit in off-Broadway history as well as a perennial regional theater favorite. There’s enough of the old material to summon up pleasant memories and enough new material to make you think you haven’t seen it before.

It simply but subtly infuses everything with such current tropes as cellphone technology and openly gay relationships. The obsessing parents of the newborn child are now both men. The funniest song is how clueless men text photos of their penis to aghast girlfriends, erroneously thinking it will advance their romance. References to e Google, Netflix and playing golf at Mar-A-Lago have been layered in.

But what emerges once again is how ILYYPNC keenly observes the awkward, painful and hilarious steps and missteps in burgeoning romance and marriage. From a herky-jerky first date between two nerds, to women pretending to be fascinated by their dates’ boring chatter, to simply waiting for a spouse to finish dressing to go out, the situations are familiar whether comic or poignant.

Jensen has proven a major talent in recent seasons as Clara in Passion and Alison in Fun Home at Zoetic Stage, as the accordion-wielding bar patron in Actors Playhouse’s Once, and a transcendent performance as the heroine in Slow Burn’s The Bridges of Madison County. That expressive liquid soprano is deployed once again to caress the heartfelt “I Will Be Loved Tonight.” But she gets to show for the first time here a well-honed comic bent.

Cartland long ago earned the status of one of the region’s most inspired clown princes. But keen observers have always seen how his comic parts usually contain a quiet dramatic core. Here he gets to exercise both whether as the over-the-top serial killer advising visitors to his prison about relationships or as the late middle-age husband quietly marveling at how after years of marriage “Shouldn’t I Be Less In Love With You.”

Ross, a MNM stalwart in Hair, Spamalot and The World Goes ‘Round, gets to demonstrate his wide range both as an actor and singer, but no more notably as the gay father who finds himself sinking into a baby talk scat that morphs into a wild hip hop interlude before resuming into infant-speak.

Kopp, who has worked throughout the region but rarely here, combines a lovely voice with a talent for comic turns. She melds both as the bridesmaid recounting the endless procession of horrendous gowns and doomed weddings she has been enlisted to attend in “Always A Bridesmaid,” making the most of some of DiPietro’s wittiest lyrics.

Ruggiero, who has directed virtually every major Broadway musical in regional theaters including his Carbonell-nominated The Drowsy Chaperone at the Wick Theatre, imbues such shows with drive, polish and verve, but does it invisibly. You aren’t conscious (and you shouldn’t be) of what he (or his cast with his blessing) have invented that adds a sense of volume and weight, such as how Cartland keeps trying to take popcorn from his date at a movie he thinks he’s going to hate.

Fantel’s band, including Rick Kissinger’s woodwinds, Jackie de los Santos’ bass and Roy Fantel’s percussion, is note perfect in the newly-expanded arrangements. Fantel, one of the busiest artists in the region, expertly melds the quartet who can sound like a choir’s cantata or the Manhattan Transfer.

MNM’s production quality keeps ratcheting up. Cindi Taylor covers the huge expanse of the Rinker Playhouse with a Mondrian-like array of screens upon which Thomas M. Shorrock projects abstract designs. But Shorrock also communicates the changing environment with his lighting. One stretch only professionals will notice is how he slowly dials down the mood-enhancing light when Jensen sings the lovely “I Will Be Loved Tonight.” With 50-plus roles and only four actors, Linda C. Shorrock ably carries part of the burden by designing scores of costumes including the horrible frock that Kopp wears in “Always A Bridesmaid.”

Last but not least is Justin Thompson’s sound design. Few will notice it because it’s as close to perfect as anyone could ask. It helps that the performers enunciate the lyrics so well, but Thompson’s sound has a clarity and brightness unexpected in what is essentially a room made of concrete.

ILYYPNW should feel dated, even fusty, despite the contemporary references. But MNM Productions delves into the universal resonances and shows how the work should be done no matter the period.

I Love You, You’re Perfect, Now Change plays through August 12 at the Rinker Playhouse at the Kravis Center for the Performing Arts in West Palm Beach. Performances 7:30 p.m. Thursday-Saturday, 1:30 p.m. Saturday and Sunday. Running time 2 hours 15 minutes including one intermission. Tickets $55. Visit www.kravis.org or call (561) 832-7469.