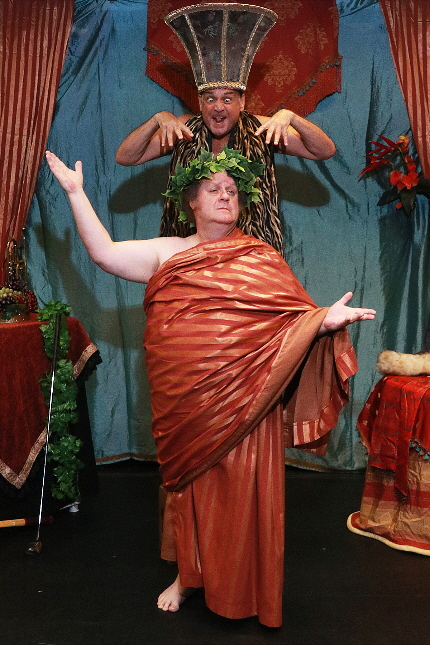 Worse than Escape to Margaritaville, worse than Dance of the Vampires, worse than Spiderman Turn Off The Dark, the mega-epic The Big Bang may be the most bloated, overwrought, inept, politically incorrect, painfully lame, downright stupidest musical of all time.

That Big Bang would be the imaginary extravaganza being hawked at a fictional backer’s audition, not the identically-named three-performer romp now at Actors Playhouse and just as delightfully daft and demented as it was there in 2003 and 2005.

Once again, this antic comedy posits two hapless playwright-composers and their accompanist flogging their magnum opus for those of us in the audience in hopes of raising the $83.5 million needed to pay for the 12-hour four-evening history of humanity from the titular event to Woodstock with stops through the Garden of Eden, ancient Rome and the ante-bellum South.

After serving cheap champagne and processed cheese to the audience in a borrowed Park Avenue penthouse, Ken Clement, Nick Santa Maria and pianist David Nagy deliver with clueless pride and infectious enthusiasm some “highlights” of their masterpiece, which would require hundreds of actors singing in 16-part harmony, thousands of costumes and 302 prosthetic devices. They also note that there are plenty of opportunities for product placement if you’re interested.

We get to hear numbers for an array including Adam and Eve singing “Free Food and Frontal Nudity,” two Jews pulled from a Brooklyn deli talking about building the pyramids (with the vaudevillian lyric “We have to make a quick ex-odus”), the Virgin Mary and Gandhi’s mom comparing how hard it is to be a mother (“After the loaves and fishes, guess who had to do the dishes”), Pocahontas and Minnehaha transplanted to the singles bar at the Algonquin Hotel. Like “Laugh-In,” it breezes by fast enough that logic is irrelevant; a Native American’s war chant under his breath over and over is “Henny Youngman, take my wife, Henny Youngman, take my wife.”

As Ken and Nick get more and more enraptured in their presentation, they borrow a lampshade here or a fruit bowl there from the elegantly-appointed apartment. We won’t spoil what Nick uses to approximate Napoleon’s hat. By the end of the play, no surprise, they have virtually dismantled every accoutrement in the place.

Our favorite is when Clement pulls a cord down from a window treatment and rips the fringe off an ottoman to make the tail and mane of a lion getting ready to eat Christians in the Coliseum. Well, no, actually our favorite is when he has to become a plantation owner looking like Colonel Sanders and he… well, you have to see it.

The 1997 work by real-life composer Jed Feuer and wordsmith Boyd Graham provides a tailor-made opportunity for the specific talents of this trio. It’s a solid fit for the fourth clown, director David Arisco, whose has a bottomless imagination for comic physical staging and “bits of business,” as they say in theater.

The humor, especially the lyrics, are replete with painful pun-full groaners. Many numbers are intentionally clueless politically incorrect so that the terrible impersonations of Frank Sinatra and Jerry Lewis are interspersed with the broadest stereotypes of the Irish, the Jews, the African-Americans, etc. etc. You name them, they’re on the list. But the characters’ fervor rolls on like a juggernaut.

There appears to be some ad-libbing as things go wrong on stage or in interaction with the audience – although Arisco has been known to plan and orchestrate such “impromptu” moments in earlier shows. What does seem genuine is that the actors crack each other up, sparking gales from the audience. (Think of a Carol Burnett skit with Tim Conway and Harvey Korman).

We’ll grudgingly admit that the one hour 40-minute intermission-less evening wears out its welcome about 15 minutes too early.

This is the third round for Clement, a longtime South Florida stalwart who moved to Los Angeles. He quipped as the exertions caused both men to wheeze a bit, “This was a lot easier 15 years ago.” But while Clement turned in some stunning dramatic work locally, he remains one of the funniest actors ever to grace local stages with dead-on comic timing and a bright open innocent face that can grin or grimace as needed. He somehow inhabits his character completely, yet can step in and out to wink at the audience without losing focus.

Santa Maria, who co-authored the world premiere of Real Men Song Tunes…and play with puppets at Actors in 2012 , is just as engaging as he dives into everyone from Julius Caesar ignoring a soothsayer’s warning to Napoleon courting Josephine, many with the requisite rotten accents and fourth-rate impersonations of famous entertainers.

Musical director Nagy gets pulled into some of these shenanigans, but his real accomplishment is behind an on-stage baby grand that hides an electronic keyboard emitting what may be the widest array of musical instruments in a full orchestrations that any one pianist has been asked to produce in one sitting.

As hard as the performers are working, the designers and behind the scenes folks got a workout as well. So individual credit is due Scenic Designer Gene Seyffer, Lighting Designer Eric Nelson, Sound Designer Shaun Mitchell, indefatigable Costume Designer Ellis Tillman, the delightfully idiosyncratic set dressing and props by Jodi Dellaventura, (all working from the original designs by Seyffer and Mary Lynne Izzo), Production Stage Manager Carl Waisanen and Production Manager Carlos Correa.

Stupid, yes. Foolish, yes. Pile on the adjectives. But this unapologetically knockabout farce could supplant the dictionary definition for a “hoot.”