Impressions Is A Pleasant Stroll Through Gallery Of Imagination 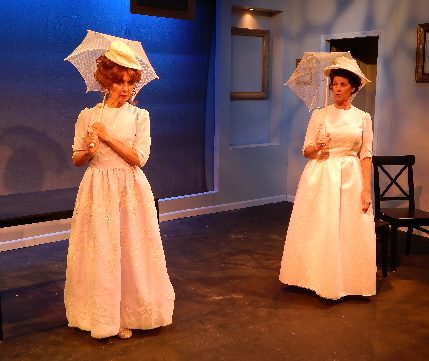 Barbara Sloan and Patti Gardner are sisters on a disturbing stroll in KInpressions, a world premiere by Michael Leeds from Pigs Do Fly Productions / Photos by Carol Kassie.

Not every theatrical event has to be an outsized venting of passion filled with intellectual pyrotechnics.  Sometimes a work can be satisfying to the brain and the heart as a gentle celebration of imagination and human behavior as with Pigs Do Fly’s world premiere of Michael Leeds’ Impressions.

Like that game in the restaurant in which you make up backstories for other diners across the room, this multi-faceted gem spins off what-if episodes inspired by 14 Impressionist paintings projected on the back wall of the set at Infinite Abyss in Wilton Manors.

Some are wryly funny, some touching, some an amalgam of both, but all are beautifully limned by three of the best actresses in the region: Karen Stephens, Patti Gardner and Barbara Sloan inhabiting a procession of disparate characters.

It helps that Leeds, one of the state’s finest directors, does double duty in realizing his vision. For instance, in “Portraits in the Countryside,” three women are sewing. There is no dialogue other than an exit line. Instead, the women communicate among themselves with grunts, coughs, ahems, throat clearing and the like dictated by Leeds’ comical aural choreography.

The featured artworks encompass bold-face names like Manet, Monet, Cassatt, Toulouse-Lautrec and Degas, but also others less known such as Frederic Bazille, Gustave Caillebotte, Isaac Israels and Marie Bracquemond. But they all share that stylistic quality of a hazily glimpsed dream. They also intentionally depict a wide array of social and economic strata — from Gardner and Stephens as downstairs laundresses discussing sex and a clandestine foray upstairs, to Gardner as a past-her-prime diva posing for a photo just before her last public appearance – in the audience.

Some vignettes work better than other. The opener portraying a café singer inhabited by Sloan isn’t very engaging.  But most others are expertly written, directed and acted

One favorite: Stephens is a woman in a cafe having drinks before visiting her son about whom she rhapsodizes ecstatically, especially how she has chosen a special birthday gift for him. Why she is not able to be with him full-time initially is a mystery. But we slowly realize what her profession is and surmise that might be the reason for the separation, and why she is drinking to get up the courage for the visit. We are wrong. As with several of these pieces, Leeds has an O’Henry-Saki twist ahead.

None of the pieces necessarily intends to reflect exactly what the artist intended. Instead, Leeds ingeniously heads into unexpected directions. Another painting of two women dancing together is spun out into a story of lesbian love and murder.

All but the last piece are set in the late 19th Century, but the final portrait by Degas of two ballerinas warming up occurs in the present as three former dancers now in middle age are prepping for a fund-raising performance.

Leeds long ago proved his talent for pacing and tone which are especially evident in the varied palette he creates here.

Pigs Do Fly Productions is celebrating its third season producing work for, about and by people over 50 years old, but its previous fare has mostly consisted of collections of short plays. This second full-length outing is its first commission.

The set by Jodi Dellaventura is a simple depiction of a gallery with empty gilt-edged picture frames but detailed enough to have signs above the doorway indicating what period of painting is on display in the next room.

The lighting design by Ardean Landhuis is quite effective in creating different locations and moods.  But either he and/or Leeds came up with a subtle but brilliant coup de theatre: When one vignette is told from the point of view of a widow driven mad with grief, the lights are bright like a day at the beach and the paintings are in color. But when she is seen briefly from outside herself, the lights go murky and the paintings switch to black and white.

Jerry Sturdefant created a couple dozen period costumes to echo those in the paintings – and built them so the actresses could change quickly and easily in every scene. A shout out, too, to Kevin Raymond Hammond for the parade of credible wigs, traditionally the weakest visual element of any show in South Florida.

Overall, Impressions is the kind of rewarding quiet smile you get walking through a museum gallery on a last afternoon.

Full disclosure: Karen Stephens and I are among the co-hosts on Iris Acker’s Spotlight on the Arts television program on BCON-TV.