Letter From Bill Hirschman To Stephen Sondheim: Come On Down To Visit Actors’ Playhouse

I feel like I can call you Steve because we’ve spoken briefly a couple of times. First, happy birthday on Tuesday. I have a birthday present for you.

I know you were intimately involved in putting together the 2010 Broadway revue Sondheim on Sondheim with your frequent collaborator James Lapine. Like all loyal Sondheim addicts, I enjoyed it well enough. It featured Barbara Cook, so you can’t go wrong with that.

But the current Actors’ Playhouse production transcends that edition in nearly every detail. My tip is that you celebrate your 86th birthday by flying down here to see it.

Seriously, Steve, buddy, the work by eight inspired performers and the band, molded by director David Arisco and musical director David Nagy, would not just satisfy but exceed your famously demanding standards. They would make you proud.

Understand: I’m not a huge fan of most revues. They frequently are average to mediocre productions designed to trigger nostalgia by imitating the original tunes as closely as possible, and primarily meant to fill a slot in the schedule with a comparatively inexpensive outlay. But the full rich sound of every one of the cast members and the eighth-note perfection of the band imprinted the production with the sense that this is not some greatest hits evening meant to stimulate memories. This is meant to create new ones.

What Arisco, Nagy and company accomplish that few revues achieve is that the singers act each song as if it was a scene in a play rather than just delivering an emotionally disembodied presentation. These are theater songs that advance a narrative or illuminate character — songs with backstory, subtext and purpose. This troupe’s interpretation may not be the precise backstory, subtext and purpose of the original, but the passion and storytelling elevate them into theater rather than a glorified nightclub act.

It helps that they are being delivered by some of the finest veteran and upcoming singing actors in the region, in a few cases, the state: Christopher A. Kent, an expatriate visiting his home base;  Don Juan Seward II, the outstanding Coalhouse Walker in the Playhouse’s Ragtime; Alexander Zenoz, a frequent performer with Slow Burn Theatre Company; Playhouse newbie Marilyn Caserta; Lindsey Corey, who nailed Violet for Slow Burn; Wayne LeGette, one of the region’s best leading men with an unusually expressive baritone; Margot Moreland, a superb performer who has done Mama Rose twice; and the unequalled mezzo Lourelene Snedeker, whose Mama Rose I would pay my own money to see.

You know I’m a huge fan of yours, Steve, but that actually only makes me set the bar higher than normal. I’ve heard these works delivered by the best in the business and have little desire to hear anyone do a less than sterling job. But there’s no need to fear here.

Pushing this even further are the ingenious vocal arrangements by David Loud, orchestrations by Michael Starobin and conception by Lapine. The cast and band agilely negotiates the already challenging music you wrote, which here is turned into a monster roller coaster of intertwining songs with spin-on-a-dime changes in key and tempo, sometimes in multi-part harmony.

As a result, even if an audience member is a Sondhead like me, it’s fascinating how these songs are turned inside out without ruining their integrity, but instead are invested with a freshness. The aficionado can simultaneously revel in the familiar and yet savor new dimensions uncovered by these efforts. 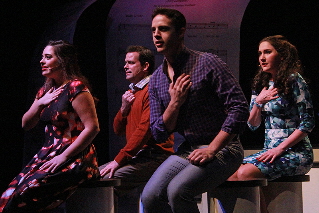 An early example is “Something’s Coming,” performed a few months ago on this same stage in a fine revival of West Side Story. Originally written for a single young man, here it’s four singers passing around the lead melody while the others slide in and out with harmonies and other background vocals.

Steve, for the six readers living in Slovakia the past few decades, I need to let them know: Sondheim is perhaps the most important practitioner of the American musical theater for the inherent quality of his work, and more importantly for his unending shattering the boundaries of what the art form accepts as mainstream – while still being entertaining and intellectually stimulating. His work encompasses lyrics for West Side Story and Gypsy, and the music and lyrics for such benchmarks as Company, A Little Night Music, Into The Woods and his masterpiece, Sunday in the Park With George whose Act One and Act Two both have the among the best last-15-minutes of any show.

Sondheim on Sondheim is probably the fourth revue of his work, not counting the score of charity benefits and authorized award ceremonies. It differs because Lapine filmed interviews in which he described his life and artistic process, and then interspersed them with performances of songs, scrapbook photos and archival television clips of other interviews.

The evening bounces all over the timeline with 43 songs including several cut before opening nights, such as tracking the finale of Company with renditions of the initial “Multitudes of Amys” to the sardonic “Happily Ever After” and ending with the final choice, the sublime “Being Alive.” In addition to seamlessly sliding multiple songs into each other, Lapine, Loud and Starobin weave together two songs in several cases, such as “Not A Day Goes By” from Merrily We Roll Along and “Losing My Mind” from Follies – in which individual solo laments by Snedeker and Moreland interleave into a duet. Songs are assigned in ways to upend expectations such as LeGette singing the ingénue’s song “Lovely” from A Funny Thing Happened on the Way to the Forum or the veteran Snedeker singing “Take Me To The World” from Evening Primrose, usually crooned by a naïve 20-something.

The evening never seems vain or self-congratulatory in practice. The filmed pieces are filled with self-deprecatory commentary in your gravelly voice that exudes an aura of slight embarrassment at being in the spotlight. There’s even a wry 44th song written for this show, “God,” teasing admirers like me who have turned your name into something deserving of deification.

But there are so many moments: Seward’s gut-wrenching “Being Alive;” Kent’s manic “Franklin Shepard, Inc.,” LeGette’s barely caged homicidal ferocity in “Epiphany” making you ache to see him play Sweeney Todd, preferably with Moreland as Mrs. Lovett; the entire cast in the chilling “Gun Song” from Assassins and their uplifting “Children Will Listen” from Into The Woods. On and on and on and on. It’s frustrating to leave out people and numbers.

But the following paragraph should be printed in boldface: There are several terrific musical theater actresses here in South Florida who I would put up against most others I’ve seen elsewhere including in New York: Amy Tanner, Jeni Hacker, Anne Chamberlain, Moreland and Corey among others. But nobody but nobody acts the marrow out of a song like Lourelene Snedeker. Nobody.

With “In Buddy’s Eyes,” “Loving You,” and, of course, “Send In The Clowns,” Snedeker does not deliver cabaret numbers but exquisitely wrought, deeply felt and fully-formed performances that crack your heart open. Artistic directors throughout the state ought to come see her and be ashamed that they are not creating seasons to cater to that talent – not for her sake, but for that of their patrons, their subscription lists and their box office.

We could say something similar about LeGette, Moreland and Corey.

Arisco, of course, is a past master of classic musical theater staging that is not showily ground-breaking but fluid to the point of invisibility. Still, you also have to credit a good deal of the excellence in these performances to his vision and leadership.

Similarly, Nagy’s work with this crew and the challenging raw material is some of the best he’s done. Grinning with joy from his piano bench, he also deftly leads that on-stage chamber band: Martha Spangler, bass; Andrea Gilbert and Richard Kissenger on woodwinds; Jill Sheer, violin; Konstantin Litvinenko, cello, and Stan Spinola, horns. The Playhouse’s sound quality is notoriously variable, but Shaun Mitchell delivered a soundscape that seemed pristine from where I was sitting.

The set designed by Tim Bennett and executed by a team led by Gene Seyffer is an elegant platform-and-stairs surrounded by 10-foot-tall sheets of music and three video screens for Steve to appear on. The licensing agency provides the Sondheim film clips and projections, but Arisco was not satisfied and commissioned Gil Kaufman to augment them with imaginative vibrant visuals.

I can’t wait to return and see it again, something I haven’t done since Actors’ Playhouse’s Floyd Collins. So, Steve, come on down to Coral Gables and catch this production before it leaves April 3. I’ll buy you a birthday beer. 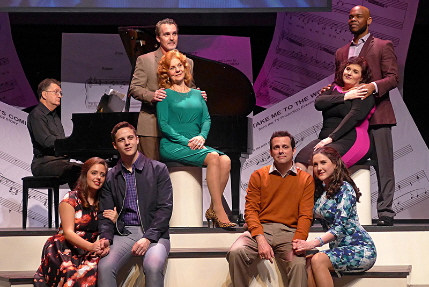 One Response to Letter From Bill Hirschman To Stephen Sondheim: Come On Down To Visit Actors’ Playhouse