Posted on November 3, 2012 by Bill Hirschman 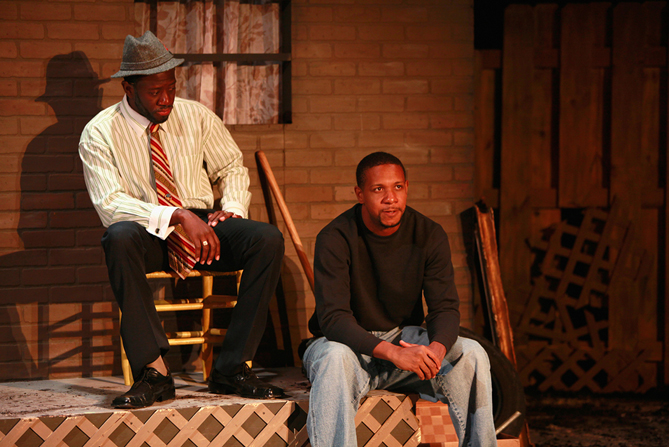 Like most of us, the slightly loony sage in King Hedley II pages through the headlines, baffled by the “why” behind the seemingly random cancer of mindless violence that contaminates the fabric of lives among what sociologists call “the underclass.”

Playwright August Wilson answers that question. He settles Langston Hughes’s query whether a dream deferred shrivels like a raisin in the sun or whether it just explodes. Wilson is unequivocal: It explodes, destroying not just the surrounding world, but the dreamers themselves.

Volcanic rage at bigotry and inequities that erode dignity pour out of these characters in streams of scalding toxicity in M Ensemble’s uneven but affecting production. In such soul-scarring circumstances, violence is not only a coldly logical result, it is nearly inevitable.

Outstanding performances by actors scraping out the insides of their being – especially Ethan Henry and Makeba Pace — propel Hedley to the ranks of M Ensemble’s most memorable productions.

The cast and director John Pryor have an incredible script to work with. While it meanders way too long (like many of Wilson’s first drafts did), the playwright’s strengths run amok to our benefit. Hedley is profligately packed with keen insights into human nature. Wilson’s addiction to street syntax, extended metaphor and poetic prose all synthesize into a verbal music. One of the cast’s triumphs is that they usually unreel this heightened speech so smoothly that it sounds perfectly natural, as if it was their souls speaking rather than their mouths.

Hedley is ninth chronologically in Wilson’s ten-play cycle documenting the tumult of African American life in each decade of the 20th Century, often viewed through the lives of neighbors in Pittsburgh’s Hill District ghetto.

Set in the yards of two ramshackle homes in 1985, the play traces the front stoop interactions among six friends and relatives who collide over two days.

The title character (Henry) is a small time thief consumed with preserving a precarious pride under perpetual assault by society’s subtle ignominies. As a result, the genial and even loving Hedley barely restrains a boiling fury that can be set off by petty perceived affronts.

Yet he must believe that he is a good person, even as he is planning a jewelry store robbery or blithely rationalizing his murder of an acquaintance. The robbery is to finance his dream of starting a chain of video stores because “I’m not going to die a poor person.” The murder, committed days after a rival sliced his face, speaks to how the accumulated weight of a thousand slights and insults can lead to violence as the only way to rebalance the scoreboard of self-respect.

The fight isn’t a fair one. Injustices surround him, such as his sometime employer finding his low bid for a city demolition contract held up for what clearly is racism. Still, Hedley quixotically plants flower seeds in the arid, rocky dirt that constitutes his front yard, and then protects it from all comers with an unexpected ferocity.

His wife, Tonya (Pace) has labored hard but in vain to escape having a child while still a teenager, working in a dead end job and failing to keep her daughter from falling in the same trap. Now pregnant again, she is trying decide whether to keep the child while watching her husband deteriorate.

Mister (Samuel Umoh) is Hedley’s best friend and partner in such crimes as selling hot refrigerators. Mister’s wife has just left him and he’s struggling whether to quit his job at a nail-making factory because he has been denied a badly-needed raised that had been promised.

Hedley’s mother Ruby (Brandiss Seward) dreams of her past as a big band singer and mourns the loss of loved ones to violence and disease. Her life is upended by the reappearance of the true love of her life, the jaunty hustler Elmore (Sheaun McKinney) who is terminally ill and dreams of settling down with the woman he abandoned decades ago. And finally there is the Wilson-required mentally unbalanced coot (André L. Gainey) who speaks truths about fate among his Biblical ravings such as “God is a bad motherfucker.”

This is an epic, almost operatic tragedy about dreamers whose hopes struggle helplessly against societal blockades and human failings. Their voices are suffused with a yearning for something finer, not just in their economic circumstances but in a world where their better natures can prevail. It’s not a subtle work. For instance, Wilson gives Hedley a facial scar that is both literal and metaphoric.

Very little action occurs onstage and as Wilson is wont to do, the story spools out slowly. The three hours is consumed with people telling other people stories that reveal their inner turmoil over a parade of disloyalties and disappointments. Ghosts of dead loved ones and past betrayals float through the evening, often resurfacing to claim new victims. But when some plot development does occur, it sets off soaring emotional outbursts which, in turn, wreak havoc in their lives.

Wilson makes no excuses for the violence; he merely explains it with a compassion for how inexorable forces exacerbate the worst of human nature.

Some moments of the production don’t quite land right; I’m not sure who meant to do what in the final crucial minute of the play. Pryor’s staging is terribly static with people standing or sitting around talking, sometimes just in a straight line across the stage. That’s crippling when dealing with a long, talky script. No one paces like a caged animal or crouches like a coiled jungle cat. The cast occasionally loses focus, which results in the play meandering about and becoming downright phlegmatic at times. In rare instances, actors stumble over a few lines.

But Pryor’s production is redeemed by many other virtues. There are long stretches when you feel like you’re simply eavesdropping on real people visiting on a lazy afternoon. The play is shot through with humor such as Mister saying the only time he has had his portrait taken was by the police who he sassed by asking for copies for his family.

And there are those speeches that every character gets that mesmerize the audience with their longing for a better life, their memories of a better past, and above all, those stunning tirades. They rage against a stacked deck, ginned both by man, fate and maybe even by God

Henry’s first act explosion is simultaneously terrifying in its ferocity yet clearly contains Wilson’s plea for understanding. Equally impressive is Pace’s long invective outlining why she wants to have an abortion, including her self-disgust that she will lose another child to the vicissitudes of the world just as she did her first daughter. She doesn’t want to provide the world another victim for a drive-by shooting. It may rank as Wilson’s finest writing. This was the speech that won actress Viola Davis her first Tony Award and Pace does it full justice.

The sole problem is that Pryor allowed both actors to run full out for their entire lengthy speeches. There is no modulation, no variety, just an unimpeded flow of excoriating lava. 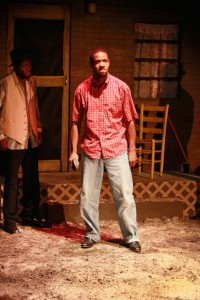 Henry continues to amaze. His Hedley is a completely different being from the pragmatic self-assured lawyer that he played in GableStage’s Race or the charming but duplicitous addiction counselor in The Motherfucker with The Hat, both within the past season. Henry has a resonant voice that is equally warm and threatening, brutish and intelligent. His heroic hunger for a better life shines through even when he is planning a robbery or railing against insults. It’s impossible not to be moved when Henry/Hedley proclaims, “I’ve got honor and dignity. I was born with it.”

Pace gives another of those why-haven’t-we-seen-her-before performances. She credibly holds both an abiding love for Hedley and a bitterness at his self-destructive behaviors that prize his pride over their marriage. Watch the pain in her eyes as Hedley unapologetically acknowledges that he still fixates on a previous lover who died while he was in prison.

McKinney, who often plays threatening characters such as the warlord in GableStage’s Ruined, embodies a hustler’s charm here and Elmore’s pleasure in the con. But McKinney also finds that same yearning that we can relate to. We come to appreciate how you still have to smile when he sells you a watch that doesn’t work and then teases you for your naiveté.

Seward is just adequate most of the time, but her final agonizing monologue is as heart-rending as any in the production. She captures Wilson’s cruel dilemma in which Ruby must deal with the fact that Elmore, who she truly loved and still loves, murdered another man who she was also deeply in love with. It should be noted that Seward is noticeably 15 years too young for her part and McKinney is 25 years too young, grey hair dye notwithstanding.

Umoh, who starred in this summer’s Dutchman for AAPACT, is genial and engaging with a bit of a Chris Rock vibe, even though he doesn’t have the verve of Henry or McKinney.

Gainey, who played a similar role in M Ensemble’s production of Wilson’s Radio Golf, clearly communicates to the audience those incisive truths camouflaged in the character’s Gospel-spouting.  It’s a tough challenge to convincingly utter portentous lines like “It’s been written down; all that’s left is to play it out,” but Gainey makes it work.

M Ensemble, the oldest continuously operating African-American theater in Florida, has now produced all 10  of Wilson’s works, having started with Fences in 1990.

The real crime was at Friday night’s performance there were probably no more than a dozen people in the audience, three of us Carbonell nominators. Yes, this is a flawed production, but it’s also one that will reward anyone who loves theater. 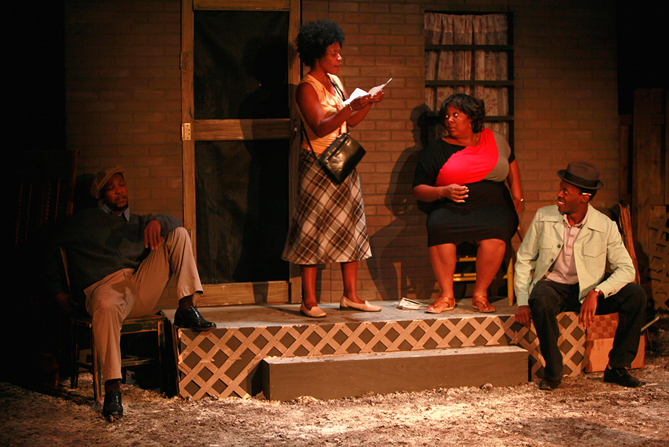