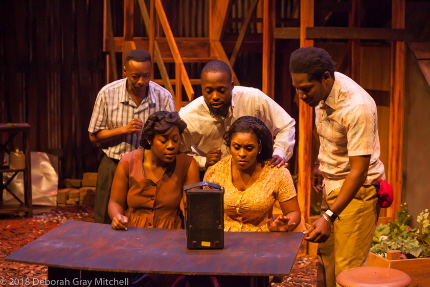 “In memory, everything seem to happen to music.”
—Tom in Tennessee Williams’ The Glass Menagerie

In the current production of The M Ensemble Company, August Wilson’s legendary Seven Guitars almost plays like a musical or a folk opera akin to Porgy and Bess or Floyd Collins.

Even when the characters aren’t singing, humming or playing instruments, their vocabulary, the rhythm of their sentences and the aria-like laments channeled through pulsating Chicago jazz and Delta blues resonate with something out of grand opera. Even “The Lord’s Prayer” is crooned to a moving melody.

It’s foolish to anoint any of Wilson’s ten plays documenting African-American life through the 20th Century as the masterpiece, but more than many of entries in the canon, Seven Guitars is an epic tragedy on a smaller but no less profound scale as anything by Shakespeare. And continuing its recent steady climb in quality, M Ensemble does full justice to this tale of dreams crushed by seemingly unconquerable societal racism.

Fair-minded observers will admit that the quality of M Ensemble’s work has ranged wildly in the past couple of decades from admirable to amateurish. But since moving in to its new home at the Sandrell Rivers Theater in the Audrey M. Edmonson Transit Village in Miami, a corner has been turned. Every aspect has ratcheted up from acting to direction, set design to lighting and costuming.

Artistic Director Lowell Williams, heading the company’s second tour through Wilson’s full catalog, has forged his cast and creative team into delivering some of the best work several of them produced.

For those unfamiliar with Wilson’s work, they have a deliberate tempo and metabolism with as much attention to documenting everyday life as advancing narrative. We eavesdrop as neighbors idly gossip, men exchange ribald jokes, the group cheers a Joe Louis’ fight on the radio that is a vicarious victory. And everyone tells stories, ranging from life in the big city to delirium-induced reveries. But in retrospect, it all creates a emotional and sociological world endangered by the tragedies that doom many of the seven friends, the titular guitars. Still, Fences and Ma Rainey are more mainstream accessible, and The Piano Lesson won him his second Pulitzer.

To woefully understate the complexity of the narrative, the play opens and closes after the funeral of Floyd “Schoolboy” Collins in the common backyard of a rooming house in Wilson’s 1948 black ghetto of Pittsburgh.

In between is a flashback in which Collins (Jean Hyppolite) is the prodigal son returning home from trying his luck as a guitar player in Chicago – which has resulted in him creating – but hardly profiting from financially – a hit record putting him on the cusp of stardom.

Encouraged, he has returned to recruit old bandmates, the affable harmonica player Canewell (Chat Atkins) and drummer Red Carter (Pedro Louis) to return with him to Chicago to capitalize on the success. But his real reason for returning is to convince his true love Vera (Rita Joe) to come with him, even though on the first trip he left the recalcitrant Vera in favor of an opportunistic floozy.

Observing it all is the skeptical but maternal landlady Louise (Stephon Duncan) and the obligatory Wilson madman-magical seer-truthteller Hedley (Keith C. Wade), an aging immigrant hoping for an heir. Mixing everything and everyone up with her sexuality is the beautiful flirty young Ruby (Brianna Hart-Cox) who has also returned from a big city empty-handed and seeking ego-reinforcement back home.

Floyd’s plot driving dream hits snag after snag. Indeed, almost all the characters have dreams consistently frustrated by racism, poverty and societal forces, just as they seem achievable. It is a world in which most of the male characters keep a pistol in the small of their back in their belt or wave around sharp cutlery. Canewell quips, “God doesn’t give you a chance. At least the devil lets you roll the dice.”

Floyd, undercut at the last minute from success including winning back Vera, takes an action that spirals him and the others into a fatal abyss.

Williams’ work is so subtle that it’s rarely noticed. But he has elicited fine performances in creating a believable community of friends who are simultaneously giving and selfish; gentle and violent; lonely, loving and lust-driven.

Hyppolite hasn’t been seen much locally, but the Miamian makes a strong multi-faceted character of Floyd whose yearning amid a rare flash of hope makes us forgive his character’s faults. The rest of the cast is excellent especially Rita Joe’s conflicted Vera and Atkins’ garrulous Canewell.

But the standout is Wade, an M Ensemble veteran, who posts what may be a career-best here as the addled Hedley, shuttling subtly between speaking seeming nonsense about a mythical world playing in his head, memories of a nightmarish past and uttering incredibly wise and insightful observations about the world around them. Wade is always believable and wrenches emotions out of anyone seeing his work here. The sole misstep – and it’s not minor – is that he and Williams saddle Hedley with a Caribbean accent so thick that half his words are indecipherable – a true tragedy when we lose Wilson’s poetic patois.

Among the virtues of the production is the scenic design by Mitchell Ost and Jessica Diaz, and evocatively lit by Ost: a three-story wooden representation of a fire escape and apartments in the rooming house, fronted by a yard strewn with wood chips as the floor and dotted with aging mismatched furniture and livestock cages.

Similarly, the multiple costumes for each character by Shirley Richardson nail their personalities, their emotions and their changing situations.

The result is a morality tale from 1995 about 1948 that is timeless and could not be more timely today.