MNM Recalls The Music In My Way, A Tribute To Frank Sinatra 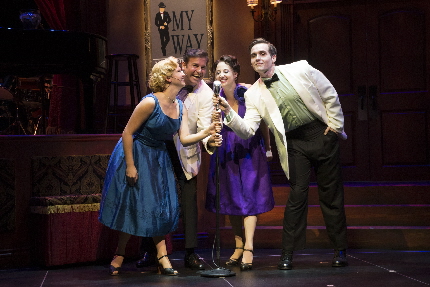 In the outstanding revue, My Way, A Tribute To Frank Sinatra, the truth is that Ol’ Blue Eyes is missing.

There are no Sinatra impersonators, the four superb performers don’t sound a thing like him and the arrangements of his greatest hits, which include two- and four-part harmonies, do not echo his iconic vibe – all of which were very wise choices. Any attempt to rechannel a once-in-a-lifetime phenomenon who defined the word “inimitable” would be doomed.

Instead, the evening from MNM Theatre Company is a solid, polished, thoroughly entertaining stroll through 58, yes 58, of the songs closely associated with his career. Indeed, My Way is as much a tribute to the songwriting geniuses of the ’40s, ’50s and ’60s whose work became so identified with Sinatra, like Sammy Cahn, Harold Arlen, Jimmy Van Heusen, Cy Coleman, Johnny Mercer, Rodgers and Hart.

But other than the embarrassingly idolatry-drenched presentation of useless biographical nuggets and hedonistic words of wisdom from the Chairman of the Board, this production of My Way is simply as good as this genre gets.

Sinatra may have recorded 1,300 songs, but you’d be hard pressed to name any off the top of your head missing here, spanning everything from his bobbysoxer days to the rat pack persona to the contemplative later work. It’s all here. All. So My Way sketches a history of pop music from the big band era to when even rock stations reluctantly played some of his hits. Unlike many such revues, most numbers are performed close to their entirety rather than snatches slammed together to ensure fans don’t miss a favorite number.

The overall effect is more than just a walk down memory lane for pre-Boomers, but a warm and insightful celebration of American pop music in its own right.

The piece created by David Grapes and Todd Olson premiered in Nashville in 2000. The songs are mostly grouped into medleys with themes: Broadway (“Where or When”), Love and Marriage (“The Tender Trap”) and Cities (“New York, New York”). But the key element is the arrangements by Vince di Mura, Stephen Kummer and Donald Jenzcka that don’t duplicate or reinterpret the works, but still make them feel fresh.

The MNM success is due to virtually everyone involved: the singers; musical director; staging director; the live band; the arrangements; the sound, lighting and set designers; the stage manager, and whoever physically operates the light and sound boards.

The most obvious assets are singers Hannah Richter (unrecognizable from the punk rocker in Thinking Cap’s Lizzie), Laura Plyler (Lina Lamont in the Wick’s Singing in the Rain), Mark Sanders (again unrecognizable from the smoldering Actor’s Playhouse’s Murder Ballad), and Clay Cartland (if you have to ask, you’ve never been to theater in South Florida).

Thanks to the ever dependable director Dom Ruggiero, all four deliver these songs vocally and with some staging so that while these remain cabaret-juke box numbers, the performers are telling stories. The four inhabit those stories and, in doing so, force the audience to rehear and reassess the meaning of lyrics they know by heart. They also evoke a chemistry that may or may not be natural, but certainly is convincing.

Everyone has many moments to shine: Sanders with his classic Broadway leading man voice illuminates a soulful “One For My Baby” and hammers home “That’s Life.” Cartland croons “Witchcraft” and adds a crucially smooth harmony to a score of numbers. Plyler’s soprano virtually makes love to the melody and lyric in the lesser known “Something Wonderful Happens In Summer.” 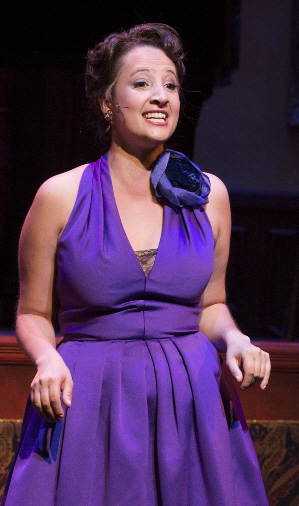 Saving best for last is Richter whose extensive work in musicals belies her amazing facility as a nightclub chanteuse born a generation or two too late. From her first solo with a liquid “The Way You Look Tonight” to her measured phrase-by-phrase delivery of “My Funny Valentine,” her work is worth the price of admission.

They appear in white dinner jackets and period cocktail dresses toasting each other with martini glasses and inexhaustible smiles at having the chance to sing this material.

All of that talent is molded by musical director Caryl Fantel who has seamlessly guided the aural facet of the show including the smooth harmonies and her band. Okay, the band: Caryl on piano, Roy Fantel on drums and buddy Rupert Ziawinski on acoustic bass. Over the years, they have provided the backbone for scores of productions. But this one falls so solidly in their wheelhouse that they are just as much the stars of this production as the singers. The Carbonell Awards only recognize musical directors, but this trio should be eligible as an entity in itself.

MNM once again reinforces its reputation for executing the technical side of a show: Cindi Taylor creates a rich stylish salon with red curtains, wood-paneling and three chandeliers; Jose Santiago relies on constantly-switching spotlights across the light dappled interior; Richard Szczublewski once again provides crystalline sound and keeps a perfect balance between the band and the singers, and credit goes to a crew supervised by production stage manager Suzanne Clement Jones for precise switching of the lighting and sound elements – again there should be a Carbonell category for stage management.

The show’s one weakness – and it is noticeably detracts – is the awful verbiage and, frankly, its delivery. Sinatra’s mother could not have written more worshipful stretches of narration. Of course, other than mentioning his love of liquor and assorted women, there is no hint of his temper, moodiness, obsessive perfectionism, Mafia connections or anything else. This isn’t a bio-musical ala Jersey Boys.

And then there is a minor credibility problem when we have a group of 30-somethings talking in faux-adoration about music that you know damn well is not on their Spotify feed. In a medley of moon-related songs, one person recalls fondly how, “We all looked up in the sky that day in 1969 and looked at the moon” when Neil Armstrong stepped on the lunar surface – when it’s clear he was, at best, in diapers at the time.

But if you love an endless waterfall of great music expertly delivered, you can’t go wrong here.

My Way: A Musical Tribute to Frank Sinatra plays through Oct. 14 at the Rinker Playhouse at the Kravis Center for the Performing Arts in West Palm Beach. Performances 7:30 p.m. Thursday-Saturday, 1:30 p.m. Saturday and Sunday. Running time 2 hours 10 minutes including one intermission. Tickets $55. Visit www.kravis.org or call (561) 832-7469.