Mosaic’s A Measure of Cruelty Is a Benchmark Triumph 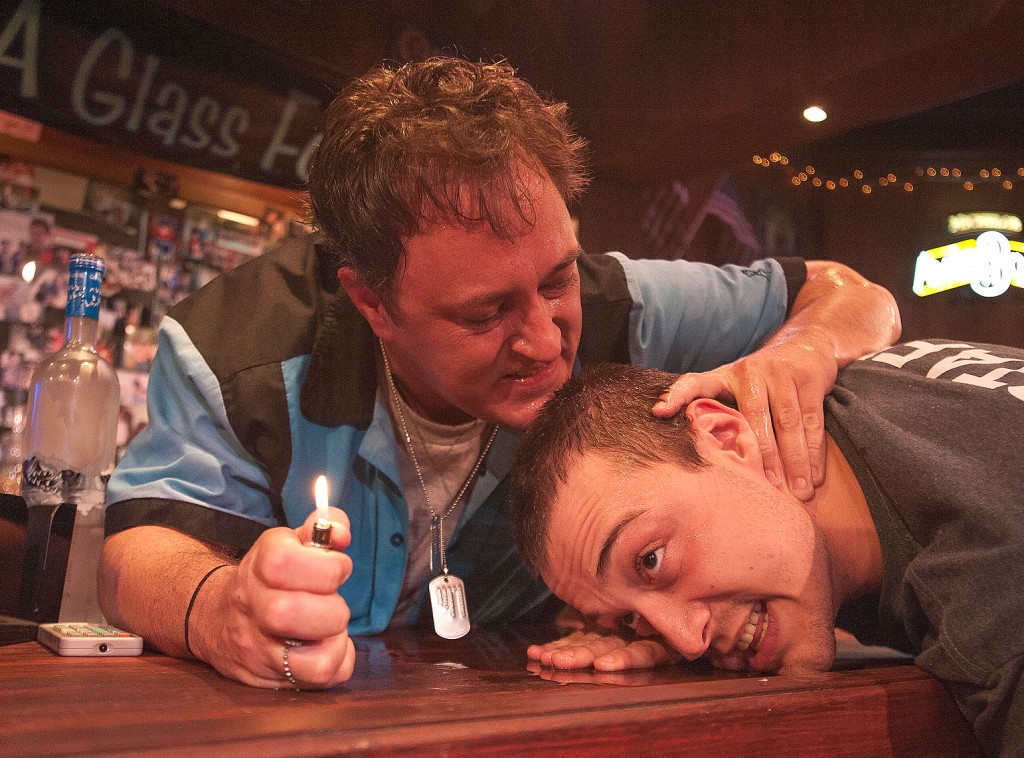 Neither protagonists nor antagonists, the haunted trio at the center of A Measure of Cruelty are desperately seeking compassion and redemption for their separate sins when all they can find in themselves are levels of self-disgust.

Your awareness of your own transgressions and your ability to muster forgiveness for others is jammed into a crucible for self-examination by the spectacle of flawed humanity in this stunning world premiere at the Mosaic Theatre of Joe Calarco’s play.

In the 21st Century, the world premiere of a play is just a mid-term step in its development to a polished piece ready for a publisher and posterity. Critics and audience understand that any new script is “going to need work” before its next production.

Which is why Calarco’s script is a baffling surprise. This excoriating yet compassionate examination of the societal and human roots of violence has emerged on the Mosaic Theatre stage nearly fully-formed, a triumph that sears then cauterizes then rips open the scarred soul all over again.

But in its evolution in the rehearsal room, Cruelty has been truly blessed by director Richard Jay Simon’s steady vision and riveting performances from Dennis Creaghan, Andrew Wind and an indelible tour de force by Todd Allen Durkin eclipsing even his superb work last month in GableStage’s A Steady Rain.

Yes, this was the drama originally entitled The Michael Brewer Project, referring to the nationally infamous incident of 2009 when four boys doused a 15-year-old Deerfield Beach Middle School student with a flammable liquid and lit him afire.

But let’s make this crystal: The local familiarity with this specific incident has virtually nothing to do with this play’s devastating impact. You could switch in different names and specifics and have the same effect. Unfortunately, horrifying incidents have become such an epidemic that striking a resonating chord among audiences around the country will be the least of this play’s problems. While this work was inspired by the Michael Brewer tragedy and references it directly, this is meant to be a far more universal examination of broader issues, not a docudrama.

In retelling, the plot set-up seems more mechanical than the finale of a Greek drama. But Calarco, Simon and his cast make it thoroughly credible through whatever magical suspension of disbelief that theater harbors.

Set three days after the tragedy, we are in a neighborhood blue-collar bar in Deerfield Beach. Buddy (Durkin), recently back from the Iraq War where he was wounded physically and psychologically, has come home to work at the tavern owned by his crusty father Teddy (Creaghan). Brewer grew up across the street from Buddy and Teddy, and the men plan to raise money for the family with a blowout event at the bar.

Listening to the wall-to-wall news reports on the bar’s television, the entire world seems to be searching for the fourth teenager involved in the attack. But for reasons even he does not understand yet, Buddy is hiding the frightened but pathological teenager Derek (Wind). All three harbor secret tragedies and at least one unforgivable act in their past, which all tumble out and collide in a gut-purging series of confessions and confrontations.

Along the way, Calarco investigates a cornucopia of themes including, but not limited to, the challenges of parenting, the origins of using violence to solve problems, defective modern conceptions of masculinity, how we teach that to our children, how that warps children and eventually the society they will create. On paper, it might sound as if Calarco is jamming too many topics into the work to do any of them more than perfunctory justice. But in fact, he has woven them all as component threads of a larger tapestry.

Above all, each of these people has done something heinous, yet Calarco wants us to feel a empathy for their frailty. Derek asks the other two, “Ain’t you ever done anything you wish you could take back… something so bad they have to invent new words for it?” We learn the answer is yes. Calarco’s characters are all hanging in visceral agony on their own cross, which to some degree they have made from themselves and to some degree was thrust upon them.

Each is both sincere and hypocritical, sometimes merciless in their evaluation of themselves and other times awash in self-deception. For instance, Teddy, who we learn does not qualify as a sensitive father of the year, nevertheless says of watching the Brewer parents’ anguish, “It takes you to your knees (when) you have a kid of your own and you want to protect them.”

This is the first work commissioned by Mosaic, underwritten by the Knight Foundation New Work Award and Funding Arts Broward, which ought to be proud of what their money has wrought.

So many things stack the deck against this success: Calarco wrote it quickly, in less than seven months. He was directing a play this month in Washington, D.C., and could not attend any rehearsals where Simon and the cast were exploring the uncharted territory in the dark. While he made many changes at Simon’s telephonic and cyber requests, he still could not hear what the actors were doing with his choice of words, with the rhythms they detected in his dialogue.

So it is a minor miracle that the work comes off as seemingly smooth as it does on the Mosaic boards. Doubtless that Simon, the cast and Calarco see rough edges where the execution isn’t as seamless as they would hope because they have been and still are wrestling with the material. Simon has said he wished he had had another week to work on the show. But every artist feels that way about their work.

Perhaps the biggest challenge for an audience is to reconcile the naturalistic blue collar milieu with the unusually lyrical language that spews forth from these people even under extreme duress. But this is theater, heightened reality, and it’s no stranger hearing these people express themselves with street-level metaphor and simile than hearing the same level of verbiage issuing out of O’Neill’s barflies and prostitutes. All right, Calarco leans a bit too hard on characters’ heavy-handed metaphor about the meteorological and metaphorical storm gathering outside.

But no one can deny that Calarco has a unique voice that comes out in convincing dialogue and in arias of anguish. The veteran freelance director and playwright, who is based in New York but works around the country, is especially adroit in the glib patois of the teenager whose speech emulates hip-hoppers and rappers.

Likely, only other directors will appreciate Simon’s deft work at creating stage pictures and establishing a steady drive. But it his leadership in excavating precious ore out of this mine that is a signal achievement. Anything you praise in what you see is due in some part to his vision.

We can’t say enough about Durkin’s work here. He spends much of the play struggling to keep nightmares at bay, a permanent scowl in his expression as if he can’t get an acrid taste out of his mouth.  But at one point, when all the scalding bile inside boils up, we watch him physically battle his own body, clutching himself to keep from splitting open, nearly ripping his head off its shoulders, chugging vodka to quench the lava rising in his throat, then nearly vomiting it. It’s stunning to watch him turn himself inside out battling revulsion. But it’s merely the showiest passage in an entire evening’s performance of theatrical excellence in which he inhabits, not creates a character.

As we said recently, we were never all that impressed with Wind’s previous work until last March. That’s when we saw what a darn good actor does with terrific direction as he created the dour, hyper-articulate intellectual being tortured by a totalitarian regime in The Promethean Theatre’s The Unseen. Here, he once again transforms himself into a remarkable portrait of a complex and conflicted person. With sad puppy dog eyes, Wind’s boy on the cusp of manhood is as physically, emotionally and psychologically jumpy as the pinball machine he plays at the opening of the show. His Derek knows the horror of what he has done and yet can rationalize it in his mind, verbally salving himself with a torrent of words. Somehow Wind, like all the actors, convincingly houses the seemingly irreconcilable contradictions in his character’s psyche,

The veteran actor Creaghan was once typecast locally as patrician Brahmins but has since played a rogue’s gallery of murderers, drunks and other miscreants. Here he adds another complex characterization of what seems to be a tough but tender parent, but who is far more culpable. Even more than his colleagues, he makes the  storytelling and near-poetic passages sound as if they were natural speech.

A quick kudo to scenic designer Douglas Grinn and lighting designer John Hall for creating such a convincing a neighborhood watering hole that you’ll want to belly up to the bar and ask for a drink, especially after watching 85 minutes of carnage.

This is one of those benchmark productions that people will reference for the next decade in discussions about South Florida theater, as in, “Yes, such and such show was great, but did you see A Measure of Cruelty?”

To read an interview with Calarco and Simon, click here.