Posted on November 8, 2013 by Bill Hirschman 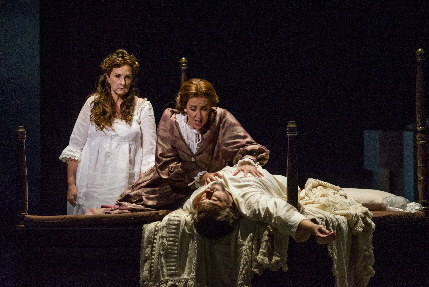 Daughter Lavinia is a bit perturbed that mother Christine has murdered her father in Florida Grand Opera’s production of Mourning Becomes Electra / Photo by Justin Namon.

The sound and power of a storm-driven surf roaring and crashing as it breaks over the rocky New England coastline was the recurring aural image conjured during the Florida Grand Opera’s production of Marvin David Levy’s tempest-tossed Mourning Becomes Electra.
.
As the dysfunctional family members become increasingly unhinged, the atonal and dissonant elements that are always present grow in strength and complexity until they dominate the final third of the opera as they mirror the protagonists’ epically tragic and frequently fatal disintegration.

To this untutored ear, it’s impossible to say whether this is The Great American Opera that it has been touted to be since it premiered in 1967, but it unquestionably is a glorious spectacle of raging passions that deserves to be seen and heard not just at the Broward Center for the Performing Arts but around the world.

Levy’s work was commissioned when the Metropolitan Opera moved into Lincoln Center. It bowed to bitterly divided critical reaction and was performed just one more season, had two production in Europe and then disappeared for 30 years. A major revision had a rapturously received revival in 1998 in Chicago followed in 2004 by similar triumphs in Seattle and New York. But that’s it, and the opus by the Fort Lauderdale composer languished again until FGO’s new general director and CEO Susan Danis wanted to open her first season of her complete aegis with a fanfare announcing a willingness to try a more adventurous change in direction.

She got what she asked for. Levy’s soaring, complex and even difficult score gets as solid a mounting as anyone could ask in this production built from scratch for FGO by director Kevin Newbury and a superbly visionary creative team, and FGO music director/conductor Ramon Tebar.

Similarly, all eight principal singers nail the florid demands of melody lines that change directions every few seconds like a flight of migrating birds. Notably, soprano Lauren Flanigan as the adulterous matriarch Christine Mannon and Rayanne Dupuis as the revenge-obsessed daughter Lavinia confidently and deftly negotiate the musical equivalent of whitewater rapids.

Despite Levy’s multiple overhauls, it’s still a piece composed in a different era. You can hear echoes of that late 1950s vibe emitted by the works of Leonard Bernstein and Aaron Copland. But the first two-thirds of the piece (and this is meant as a compliment) sound akin to the highly complex but full-bodied orchestral music from film composer John Williams. What all three share with Levy is an unmistakably American sound.

Levy’s score delivers a far more varied range than sturm and drang. He gives a young woman who pines for Christine’s son this exquisite love song that reflects her purity and the decency of the world outside that of the rotting Mannon household. He only provides a handful of comparatively brief solo arias, little or no recitative, almost no standalone “songs” per se, and no cast of thousands in the background. But there are several gorgeous passages that qualify as cries of the heart and one masterful quartet as characters express their woe a few minutes before another inevitably fatal tragedy occurs.

The opera’s libretto was written by Henry Butler and heavily adapted by the original director Michael Cacoyannis from Eugene O’Neill’s sprawling trilogy into a digestible evening, essentially reducing the arc to O’Neill’s plot points. It was revised yet again by Levy for each of the last three productions. Most noticeably, he brought the dead Christine back as a ghost for the last of three acts.

The experience of hearing a libretto in English is a bit strange to those unfamiliar with Gian Carlo Menotti or Benjamin Britten. To hear such stripped-down raging emotions expressed so bluntly in a tongue Americans actually understand requires recalibrating our definition of “normal.” Passions that sound normal in French and Italian come across as more un-credible in English than the declamatory posturings in a 19th Century melodrama.

The work has its origins in the Greek myths about Agamemnon, Clytemnestra and Electra as memorialized in Aeschylus’ trilogy Oresteia detailing the end of the curse on the House of Atreus. O’Neill transported the basic plot to post-Civil War New England and created his own trilogy Mourning Becomes Electra that ran more than five hours across 13 acts in 1931.

Here’s a sketch of the Byzantine plot: (For a detailed account from the Seattle production, click here):

Christine Mannon is having a torrid liberating affair with dashing sea captain Adam Brant while her husband, Ezra, is at the battlefront. Brant is the illegitimate son of Ezra’s brother and he hates Ezra for rejecting him as a child when his mother was destitute. Got all that? Moving on: With Ezra’s imminent return from the war, Christine must do something because she clearly has no love for him. But daughter Lavinia discovers the affair and threatens to expose it. Christine accuses Lavinia, quite correctly, of having a yen for Brant herself. The two absolutely despise each other and are in deep need of psychiatric care, let alone family counseling. On the day conquering hero Ezra returns, Christine tells him in bed about the existence of the affair, uttering such sweet nothings as “He is the man you’ve never been.” Ezra responds with a heart attack. Ever attentive, instead of his heart medicine, Christine gives him poison that Adam gave her.  Before he dies, Ezra tells Lavinia that he has been murdered by Christine. Nice homecoming.

Soon after, son Orin returns from the war with the beginnings of post-traumatic shock syndrome. He finds the two women at each other’s throats and with his affections as the new prize. Later, Lavinia take Orin to Brant’s clipper ship to observe a tryst between his mother and the captain. Orin stabs Brant when Christine leaves, as Lavinia maneuvered him to. Orin tells his mother that he has killed her lover. Guilt ridden over his death, Christine shoots herself in the head to join her true love.

But there’s more. After a South Seas vacation, brother and sister come home markedly changed. Lavinia is now a mirror image of her mother, seeking the hand of long-time friend Peter. Meanwhile, Peter’s sister, Helen, tries to comfort Orin whose sanity is slipping away. Orin threatens to tell Peter and the rest of the world about the murder in a tell-all manuscript. He has ulterior motives: He attempts to molest his sister Lavinia and she curses him to “go and die.” He obliges her by shooting himself with the same pistol used by Christine. Lavinia’s own neuroses develop into a full-blown psychosis with three-story high ghosts reaching out for her from massive family portraits in the mausoleum-like family manse.  Peter proposes to Lavinia, but as he begins kissing her lower regions, she utters the name Adam. In the only decent action in the entire show, Lavinia admits she still loves Brant and goes off to live the rest of her life alone shut up in the cursed house. Happy endings all around.

Surprisingly, although these people commit more venal sins than you find in a Harold Robbins novel, Levy and Newbury inexplicably succeed in making the audience feel a shred of compassion for human beings seemingly compelled to murder, incest, adultery and suicide by the pursuit of true – if not pure – love. They seem less evil than cursed.

The cast slips on the roles like comfortable clothes, which makes sense since Flanigan has played Christine in all three of the recent productions and Dupuis played it alongside her in Seattle, and baritone Morgan Smith as Adam played a smaller role in that production. Everyone’s acting is effective but controlled given that the lurid material provides a clear temptation to chew the scenery.

It should go without saying that the voices are marvelous such as Flanigan praying that God should punish her but not let her children kill Adam. Dupuis demonstrated both ends of her soprano range, especially a facility to hit the foreboding bottom notes when she threatens someone or draws a line in the sand. Occasionally, their voices were drowned out by the roar of the orchestra, but you knew what they were saying.

Morgan Smith’s Adam and Keith Phares’ Orin produced strong, clear voices that embraced Levy’s lyricism but never seemed as if they were over-emoting. The men could even be deeply affecting such as when Adam sings with simple devotion of his doomed adoration “You bring the gift of love; the rest is simple price.” Riley Svatos delivers that aforementioned love song like a sorely need ray of light.

Tebar’s orchestra does Levy proud with a full evocative sound that encompasses tidally swelling strings, brass blasts that come from some nether region and percussive accents like whipcracks.

But perhaps the strongest praise is due Newbury in his FGO debut and the vision executed by his production team. His physical staging includes dozens of tiny touches such as Lavinia ambivalently seeking solace in the arms of the mother she despises. When Lavinia is collapsed over her father on his deathbed, the bed splits in two and her hand tries to hang on a last moment as Ezra’s half of the bed moves off to Hades.

As in that scene, Newbury makes the most of an ingeniously minimalist but evocative set design by Anya Klepikov, the copious use of projections by Wendall K. Harrington and deft lighting by Robert M. Wierzel. FGO had planned to use costumes from the Seattle production but they literally burned up en route, so costume designer Camilla Haith had to work overtime to find the right period garb in the right palette.

A crucial visual element are two three-story-tall picture frames that contain the implacable portraits of Ezra and Christine, passing judgment throughout the evening. But those frames are often filled with scene of arbors that suddenly turn into photographic negative images when souls curdle. It’s difficult to overstate the importance of the projections in communicating the epic scale of the tragedy on a reasonable budget. One projection filling the cavernous stage is of towering looming columns in what might be a Greek temple where sacrifices are being conducted. Another precedes the curtain: a massive family tree showing four generations of cursed Mannons. But just as the show begins, there is an unnerving and chilling surprise there to get the audience in the proper mood.

Audiences who prefer more lyrical melody lines of long-dead European composers may find the last third of the piece tougher sledding as the perfectly appropriate atonality and dissonance take precedence.

Danis took a huge chance from a box office standpoint with this first offering selected under her own imprimatur.  After all, while Electra has a strong reputation among very well-informed insiders, few local patrons have heard of it, let alone heard it.  That was reflected in the auditorium at the season opening performance being only about 75 to 80 percent full.

But those in attendance clearly enjoyed it as the applause peaked when Levy rolled out in a wheelchair for recognition nearly a half-century in the making.

To read about Levy’s creation of the piece, click here.