Posted on February 8, 2015 by Bill Hirschman 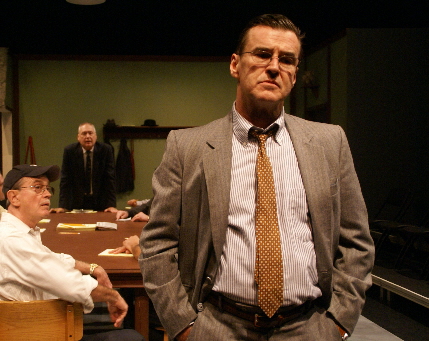 Twelve Angry Men celebrates the hummingbird of Western Civilization, the jury system. You wouldn’t trust 12 random strangers to choose a smart tablet for you; but in American-Anglo jurisprudence we trust them with people’s lives. And like the hummingbird, contrary to science, instinct and logic, it flies.

This 61-year-old staple of high school and community theaters gets an equally surprising and effective production in New Theatre’s edition of what it rightfully deems an American classic.

Paced smoothly and cleanly under Ricky J. Martinez’s direction, a dozen actors give some of the better performances of their careers in Reginald Rose’s well-crafted incisive dissection of human behavior as much as the process of judicial sausage making.

This warhorse is a play of its time – talky, humanistic, demanding a bit of patience from the audience as the tension slowly ramps up. Admittedly, New Theatre’s production could use just a little bit more oomph all the way through, especially in the opening half-hour. But this remains a solid contemplative edition of a thought-provoking drama.

For the 34 people who haven’t seen it, Twelve Angry Men charts in real time the deliberations of a cross-section of American Everymen struggling to agree on a verdict in the trial of a street teenager accused of murdering his father.

Initially only one juror votes not guilty, preventing a quick exit because a verdict must be unanimous. It’s not necessarily because he thinks the kid has been proven innocent but because he does not believe the prosecution has proven its case beyond a reasonable doubt. One commendable aspect of Rose’s script is that the hold out never claims to know whether the defendant committed the crime. In fact, we never find out. But the reasonable doubt factor becomes paramount in this death penalty case.

The juror works to persuade his companions one-by-one by questioning aspects of the case. Over time, some converts also poke holes. Tempers flare and irrelevant agendas emerge as the jurors’ ragged edges scrape at each other in this pressure cooker. You know where this is going.

But he does have faith in humanity’s innate decency to prevail and its good will under the right influence to eventually do the right thing, even if they stumble along en route – a Jeffersonian-Marxist populist belief in the ultimate triumph of the wisdom of Mankind as a collective.

What has changed in the intervening six decades since its premiere is the reluctance of many people to shoulder their responsibility as members of an interdependent society. Worse, in this polarized modern world with the compulsion to instantly come to knee-jerk, shallow and ill-informed decisions, there is a resistance to fairly and fully weigh someone’s contrary position after you have taken yours. Few of the more reasonable members of this jury would be welcomed by our current Congress.

Those of us journalists who have covered police, crime and courts know that the jury system is nothing short of miraculous. A few juries don’t work this well. Some make mistakes, especially led by the nose by lawyers for one side or the other. Innocent people are convicted, even sentenced to death, especially in Florida. But those are high profile aberrations. Generally, the hummingbird flies.

The script was written in 1954 for a live television program, adapted for the stage a year later and then shot to fame in 1957 as director Sidney Lumet’s first feature film, starring co-producer Henry Fonda and a cast of can’t be bettered character actors, a few well-known such as Ed Begley and Lee J. Cobb, and a raft of others who were en route to becoming major names like Jack Klugman or dependable hands like Jack Warden.

With a dozen parts, an uplifting theme and driving straightforward narrative, it’s been on Broadway twice, remade as a surprisingly lackluster made-for-TV movie in 1997, and produced in regional theaters which sometimes make the members ethnically diverse, co-ed or all women. (In early productions, they were all white men.) The Maltz Jupiter Theatre did a fine production in 2010 directed by Chicago’s Frank Galati.

One of the unusual and daring choices Martinez made is to stage this on a thrust stage with audience on three sides of the action. Think about it: 12 men talking around a table poses huge blocking problems. Even in a proscenium theater, you are nearly certain to have people with their backs to the audience, and some audience members chafe at this. This problem is multiplied by three in the thrust configuration, especially when you have characters facing down each other from opposite sides of a table. Martinez does a pretty good job moving characters around, often having a prime speaker come to the head of the table. Many people will argue about the wisdom of that staging choice and will bitterly resent seeing the back of someone’s haircut. But it also creates a cockpit feeling, a crucible in which we the audience are the jury judging the human specimens before us. I’ll argue that it works.

Martinez and his actors also add deft touches such as during one paper ballot, a character bent on conviction slams his hand loudly on the table each time someone’s ballot is read aloud as guilty. And in the very last seconds of the show, the hero does something inventive and subtle that I’ve never seen in previous productions.

The cast under Martinez has created discernable, differentiated individuals with varied voices, body language and personas. None seem to be relying on stereotypes, although in 60 years many have become overly familiar from frequent use. The actors work against this by immersing themselves as deeply as possible into the reality of their character.

Clinton Archambault has the toughest job as the hold-out Juror #8 because he is meant to be such a reasonable, decent, even-tempered almost generic stand-in for all of us that it is very difficult to make him compelling. Among the people who have succeeded were the aforementioned Fonda and Jack Lemmon. That’s key: Those men had that alchemical magic that emanates from the anointed. Archambault is a faultless actor who brings a solidarity, intelligence and unassuming likeability to Juror #8, quietly fueled by his modest righteousness. But he doesn’t have that God-given star quality that makes the hero’s journey riveting.

Given perhaps the meatiest part in the play, New Theatre veteran Stephen Neal delivers one of the strongest performances we’ve seen from him as the aggressive, tortured father trying to revenge himself on his estranged son by punishing this defendant. It’s difficult to find more than a few notes to play in Rose’s script, but Neal finds a dozen ways to spin the character’s corrosive anger. It’s his energy that keeps the play moving forward.

Bill Schwartz, another New Theatre stalwart, is delightful as the swaggering salesman whose primary goal is to get out the jury room quickly enough to make a Yankees game. Steven A. Chambers, New Theatre’s company member, also scores as the milquetoast of a bank clerk who finds his backbone. John Dennison of the silky mellifluous voice, who was Judge Brack in Miami Theater Center’s Hedda Gabler, makes a fine Wall Street stockbroker for whom cold logic reigns supreme.

Gene Bunge brings dignity to role of the elderly juror, Glenn Hutchinson is the raging bigot, Dave Corey as the European immigrant who loves his new country, Joel Kolker is the genial housepainter, Jerry Jensen is the even-handed foreman, Brian McCormack is the malleable advertising man, Chris Boike is a guard, and Gabriel Bonilla is the young man who raised himself out of the slums.

Interestingly, this last character who personally knows about the environment that the Hispanic defendant has come from has usually been played by a white bread actor (although at least once by an African-American). So it’s refreshing that while most of the jury seems clearly Anglo, Martinez has cast a Hispanic in the part.