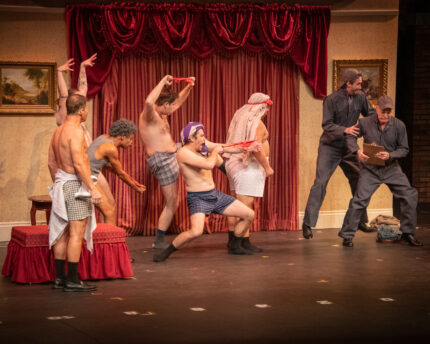 The guys in an interrupted rehearsal in The Full Monty.

True, there’s a bunch of not particularly buff former factory workers fond of the F-word stripping down to G-strings, pumping and grinding in a ladies’ bar, but The Full Monty is the kind of mainstream musical that folks used to complain wasn’t being made anymore.

The pleasant, entertaining show kicking off the season for Arts Center Management & The City of Lauderhill has a bouncy score by David Yazbeck, a gently humorous script with subrosa social commentary about body image by Terrence McNally, a cast having an infectiously good time and skilled leadership from director Michael Ursua and choreographer Alex Jorth.

Sunday’s mostly senior matinee crowd at the Lauderhill Performing Arts Center chuckled easily throughout, even clapped along with the finale dance number acknowledging that everyone connected to the performance was giving their best. Most everyone in the audience was grinning.

That said, this 2000 incarnation has never been a barn burner even as entertainment. It has thrived in regional theaters, we’ll guess, because it is based on the far superior British 1997 film – and, of course, the prospect of seeing men nearly naked. Moving the laid-off workers scenario to recession-stricken Buffalo and giving most everyone a dance number or an introspective ballad sounds like a rational approach, but you wonder why anyone bothered to make this into a musical. It’s not an especially enthralling work and is inherently forgettable an hour later.

And yet, come on, you can’t deny that that you’ve been won over sometime during the evening.

In the wake of massive layoffs at the steel plant, divorced father Jerry Lukowski (Kieran Danaan) refuses to find other available work at a chain store although he is in danger of losing access to his son because he is so far behind on child support.

His buddy, Dave Bukatinsky (Nicholas Barnes) is in the same boat just vacuuming at home but being pressured by his devoted wife Georgie (Kate Delaney) with whom he has not had serious sexual congress in some time.

When they run into a professional stripper with an impossibly sculpted body (Ryan Michael James who opens the evening with a stunning display of his art form), they are inspired to start planning to earn a quick $50,000 with a one-night performance at the local club. Why they think anyone would pay to come see them is barely addressed.

They collect four other schlubs: a momma’s boy dealing with sexuality issues (Bob Ruggles), an irredeemable klutz (Aaron Atkinson), an aged over the hill dancer with a bad back but who touts his blackness as an asset (Marcus Davis), and a middle-aged middle-manager (Richard Weinstock) who is trying to hide his firing from his wife accustomed to high living (Jodie Langel).

They are all going through different personal problem as they labor clumsily to coalesce in rehearsals accompanied by tart-tongue Jeanette (Janna Morrison).

Sporting an entire spectrum of not especially appealing body types, they struggle both terpsichoreally and mentally with the upcoming performance – and it looks pretty much like some of them aren’t going to make it. But, of course, they do, in an admittedly hilarious and rousing finale.

What should be obvious: There’s considerable blue language throughout (quite appropriate for the blue collar milieu), extensive frank sexual references and, of course, nudity other than a flesh-colored G-string.

The music is generally peppy and the lyrics often pretty funny, certainly in line with Yazbeck’s score for his similarly so-so musical Dirty Rotten Scoundrels. In one, our heroes drolly try to dissuade someone from committing suicide by suggesting numerous methods. But it is hard to believe this is the same composer-lyricist of the gentle and lovely The Band’s Visit.

The script by the late master McNally is generally passable with some crisp jokes, although it’s lightyears in quality from his Master Class, Mothers and Sons, Ragtime, Kiss of the Spider Woman and Love! Valour! Compassion! Perhaps he was paying off a gambling debt. One thing that is never clear is why the financially-strapped Jerry and Dave refuse to seek a new job.

The aces in the hole are Ursua and Jorth, veterans of scores of musicals, who apply their craft expertly. But frankly, we are waiting to see what they do with a show worth their efforts — the next one scheduled,  42nd Street. 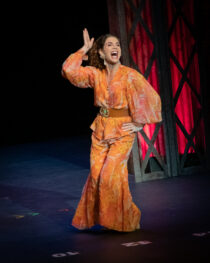 Side note one: It’s lovely to see Langel, the former Broadway actress, who has starred in so many local pieces such as Mamma Mia, Evita and Next to Normal. Her performance as a privileged pampered housewife simply glows like no one else’s on stage., Similarly, it’s a pleasure see Marcus Davis again, once a ubiquitous member of musicals and revues, here dancing the funky chicken with abandon.

Side note two: The venue has a spotty history when it comes to sound quality – the acoustics at the recent Carbonell Awards there were miserable, to be gentle about it – but the sound for this show with its digital orchestra was pristine.