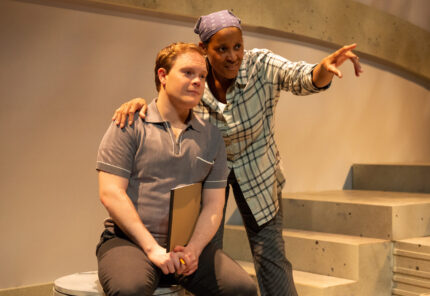 On the twin screens hidden inside Robert F. Wolin’s abstract scenic design for Zoetic Stage’s American Rhapsody, projection mapper Steven Covey gives us the moon. Later, working with video director Delavega, he’ll offer up glimpses at an airplane as it hurtles toward the World Trade Center, and a rapturous field of sunflowers in blazing bloom. But mostly, the screens serve as a backdrop for shadow play. As actors repeatedly cast their silhouettes across the empty canvas, the effect begins to take on a metaphoric heft—the sense that these people are wrestling with legacies larger than themselves, that their story is in fact America’s story.

Michael McKeever’s sprawling new work, enjoying its world premiere at Zoetic Stage, is many things: a history play, a bildungsroman, a tribute to fluid families, a cautionary tale about the current American zeitgeist and where it might be headed. Perhaps the lengthiest and most teeming play in his oeuvre—rhapsody, in this sense, refers to its seldom-used definition as an epic poem—the play spans more than 60 years and runs (including intermission) two and a half hours.

American Rhapsody is a work that abounds in muchness. And in this first produced iteration, it feels, perhaps like the American experiment itself, like it’s still trying to cohere, to make sense of the country’s mess of contradictions, its progressions and its backslides. Or, in McKeever’s words, the “thrilling highs and bottomless lows.”

As in How Green Was My Valley, McKeever filters the life of a nation through the prism of one extended family. As Franky Cabot, Alex Weisman embodies something close to McKeever’s onstage avatar, a writer who endeavors to complete his magnum opus, a poem that captures this complicated essence of a nation. And so Franky, pencil and notebook in hand, appears in the aforementioned shadows and in the action itself, seeking inspiration as both observer and participant of his family’s stories as they invariably collide with the signal moments of six decades of American history.

These collisions can stretch one’s suspension of disbelief. It’s one thing to live through, as we collectively have as a nation, the impacts of wars and terrorism and pandemics. But in McKeever’s telling, the Cabot family and friends quite literally experienced them. One character’s grandmother fought for civil rights on the Edmund Pettus Bridge; another is deployed in the first Gulf War; another loses their life in the 9-11 attacks; another succumbs to COVID-19; another, looking ahead to our near future, is poised to become president of the United States. This is no microcosm of an average American family. This is a clan whose propensity to appear on the front lines of monumental tumults is downright Gumpian.

The twin poles of Franky’s family span from Stephen Trovillion’s Papa Frank, an influential and progressive judge born in 1929, and appearing here as a voice of conscience with a cane; to Stephanie Vazquez’s Maddie Cabot-Bernal, a millennial idealist whose heart burns with the same “blue fire” as her great-grandfather,

In between, we meet Big Frank (Aloysius Gigl), Papa Frank’s less politically engaged son, who married Laura Turnbull’s Eleanor and settled into a life of quiet conservatism—and eventually curdled complacency—in a Kansas farmstead. It’s here that they raise Franky and his older sister Jenny (Lindsey Corey), a self-determined modern woman. Later in life, Franky, closeted to his parents, meets Nat Morris (Lela Elam, providing the cast’s most exuberant and affecting performance), a mixologist at a gay bar, who will become a lifelong companion. Also vital to the family’s future is Carlos Alayeto as Albert Bernal, the child of Cuban-American immigrants, who marries Jenny.

With most of the actors playing dual roles later in the show, it adds up to a lot of people to meet in a short time, and as a result, few leave much of an impression. Because their actions are almost always presented as inseparable from broader American trends and tragedies, they come across as two-dimensional representations—of second-wave feminism, of the PTSD-stricken veteran, of the AIDS crisis—rather than flesh-and-blood figures. As such, many fine actors come across like they’re going through the stylized motions. There’s a lot of entering, delivering of lines and exiting, directed with an unusual sense of inertia from the usually dynamic Stuart Meltzer.

Which is why American Rhapsody works so well when it steps away from its Great American Play mindset to hone in, through monologues, on the characters’ singular and often unexpected psychology. You can hear a pin drop as Corey’s Jenny describes her visit to an abortion clinic as a nauseating, antiseptic oblivion; the same goes for Weisman’s sharing of Franky’s essay about his post-9/11 discontent.

Alayeto is at his best when describing the careening juxtapositions Albert endured during combat, from the “golden grace” of rockets launched into the war-fogged air to the carnage they left in their wake. And Elam’s rage is palpable and deeply saddening when Nat, at the height of Black Lives Matter protests in 2020, decides with an unshakeable conviction that America is a place she can no longer inhabit. These scenes function like the numbers in a musical—psychic breaks from the conventional structure—and work as standalone examples of McKeever’s precise attention to detail and revelatory aptitude for character building.

Like the country it hymns, American Rhapsody is frustratingly imperfect. But it’s in these moments that our potential as empathetic and complicated humans rises like a sunflower in a Kansan landscape.