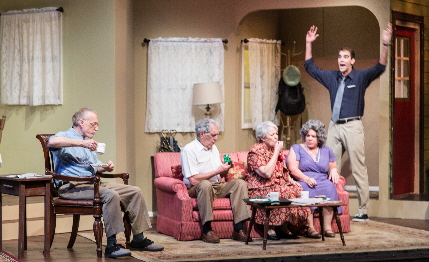 Nearly two decades after its debut, Over The River And Through The Woods still makes audiences chuckle and tear up depicting the redefinition of “family” that haunted the guilty consciences of Boomers who moved away from relatives in the 1990s in the name of finding themselves.

But what struck Florida audiences as hilarious and poignant in the 2000 production at the Caldwell Theatre has lost a bit of its power in this perfectly workmanlike and mildly affecting edition by Broward Stage Door.

Joe DiPietro’s play still starts out just this side of a television sit-com with snappy repartee among two sets of Italian-American grandparents in Hoboken and their 29-year-old grandson who they smother with love.

It still ends with a bittersweet, surprisingly realistic resolution as the hero heads off to Seattle for a new life, after receiving the begrudging shrugs of elders who only let him go because they want the best for him, not because they understand his desire to move away.

In between, director Larry Kent Bramble and his cast do a reasonably competent job navigating the change in tone. But the humor seems much broader, the characters more caricatured and the poignancy far more muted than I remember from past productions.

Set in a time when grandchildren failed to teach grandpa to operate a VCR rather than an Iphone, DiPietro introduces the Gianelli/Christiano family: Maternal grandparents Frank and Aida (Kevin Reilly and Miki Edelman) and paternal grandparents Nunzio and Emma (Jerry Weinberg and Vicki Klein). Grandson Nick (Stephen Kaiser) dutifully comes in from New York City every Sunday for dinner, in part because his parents have retired to Florida and his sister has moved to California.

Nick is our narrator, commenting wryly on the quirky facets of these people. Aida, for instance, incessantly pushes food on anyone entering the house. Any crisis, the answer is to run to the kitchen and come back with food.  Emma incessantly pushes Nick to get married so he can enjoy the simple conventional joy she found in her 60 years with Nunzio. Frank harps in an Oscar The Grouch voice about the importance of his mantra “Tengo familia,” which translates roughly into “family always.”

The seniors have no boundaries in advising Nick on personal matters because it comes from a place of love. When the grandparents ask him to explain what he does for a living, he says they won’t understand it. To which, one says with absolute sincerity, “Just because we don’t understand it, doesn’t mean we don’t want to hear about it… Whatever the hell you do, we’re darn proud of you.”

About 15 minutes into the show, Nick finally gets a word in edgewise: He has been offered a life-changing promotion in Seattle. This, of course, sets off the Italian equivalent of severe kvelling.

What do the grandparents do? Just what they’d do on “The Golden Girls:” They invite over to Sunday dinner that attractive daughter of Emma’s canasta partner, Caitlin O’Hare (Abby Perkins), as marriage bait.

It’s a sitcom setup complete with dialogue from some lost episode of “Three’s Company.” When Aida puts Nick on the phone with his parents, she admonishes lightly, “Talk fast; it’s long distance.” Ba-da-bing. It’s familiar, but DiPietro is better at it than most and he’s lulling you before slipping in something serious.

The plot doesn’t go quite as Mary Tyler Moore might expect. DiPietro has created two sides with irreconcilable goals and a dynamic centered on unconditional love. The elders perceive the weakening of family ties that they prize above almost all else. They cannot comprehend, really can’t, why Nick would leave; and Nick doesn’t want to hurt their feelings. As the play progresses, the laughs persist but the caricatures nearly fall away, leaving a heart-wringing dilemma.

DiPietro’s script works better than it sounds because it is shot through with pungent observations. For instance, the audience has been chuckling for nearly an hour at Nick’s cute little jibes about his grandparents, but Caitlin observes that Nick’s condescending digs really reveal him to be a bit of a jerk. And we realize, to our surprise, that she’s absolutely right.

In the second half, the cartoonish grandparents each reveal previously hidden dimensions. In one especially affecting reverie, Frank recalls how he hated his father for letting him sail to America as a young man — only to understand later what a sacrifice the older man was making.

The whole show works because loyalty to family and the need to create one’s own identity are recognizable to families whether they’re Italian, Jewish or Argentinian.

One problem with this production is Kaiser’s linchpin performance. Nick is such an underwritten role that it requires the actor to inject large dollops of his own charisma to give the character three dimensions. While Kaiser was a wonderfully fatheaded and privileged beau in Stage Door’s The Last Night of Ballyhoo, here he really delivers only that one note — grinning bemusement – and that one overplayed to the point that he just doesn’t seem credible. This Nick is an annoyingly galumphing college sophomore over-enthusiastically guiding a freshman on a tour through the frat house.

By contrast, the grandparents are played by old pros. Certainly, Bramble lets them start off like latter-day Molly Goldbergs in a vaudeville sketch. But when DiPietro gives the actors genuine emotion to work with, they flesh out the skeletal stereotypes. A key example is Reilly whose curmudgeonly Frank reveals his regret at misunderstanding his father. Reilly and Edelman did the play at Stage Door in 2007 with Edelman playing the other wife.

Bramble, better known at Stage Door as an actor, keeps the show moving at an impressively smooth and rapid clip.

DiPietro is better known as the author of the ubiquitous 1996 musical revue I Love You You’re Perfect Now Change and won a Tony Award for the book of the musical Memphis in 2010. But in 1998, he penned this straight play that once was omnipresent in regional theaters.

This trip to grandmother’s house may not be as vibrant as the one in your memory, but it still warms the gut like Aida’s ever-present pan of lasagna.

Over the River and Through the Woods plays through May 11 at the Broward Stage Door Theatre, 8036 W. Sample Road, Coral Springs. Performances are 8 p.m. Friday-Saturday; 2 p.m. Wednesday, Saturday and Sunday. Running time 1 hour 45 minutes including one intermission. Tickets $38; students $16. Call 954-344-7765 or visit www.stagedoortheatre.com.