Posted on February 4, 2014 by Bill Hirschman 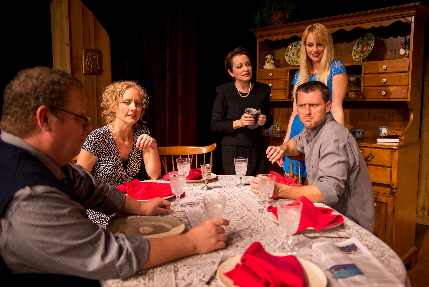 There comes a point in some of Deborah Zoe Laufer’s plays, certainly in Parade Productions’ The Last Schwartz, when you realize that the gentle comedy has morphed – some time ago – into affecting drama.

One minute, the audience is giggling at the airhead model cluelessly upsetting a memorial with her boyfriend’s family; fifteen minutes later, a weeping wife has most patrons spellbound with her emotionally horrifying tale of mental cruelty.

Laufer’s overarching touchstone is how we deal with the past, how a 21st Century family with a storied multi-generational saga and more recent prosaic baggage can cohere or disintegrate.

Laufer, who premiered several plays at Florida Stage including this one, has a wry vision of families as a crucible of support and indifference, humor and pain. Some of her works like The Last Schwartz and End Days pose a difficult mélange of tones, and Parade Productions’ production doesn’t smoothly meld Laufer’s various parts.

That said, the stand-alone strands of farcical comedy, subtler black humor and heart-rending pathos are delivered independently with quite satisfying results through skilled performances molded and guided by director Kim St. Leon.

The play opens after the middle-aged Schwartzes have travelled from the city to their rustic homestead in upstate New York that has been the family manse for 70 years. Today is the one-year anniversary of the patriarch’s death and the estranged relatives have reconvened to light the memorial Yahrzeit candle and dedicate the headstone.

Norma (Candace Caplin) is the suffocating take-charge older sister who venerates the immigrant family’s generations of struggle over anti-Semitism; oldest son Herb (Ken Clement) is a genial but pragmatic schlub who would rather sell the house than pay the upkeep of an empty structure; Bonnie (Kim Ostrenko) is his taken-for-granted wife who converted to Judaism seeking the close-knit family she has yearned for her entire life; youngest son Simon, (Mark Della Ventura) is the profoundly introverted son who is an astronomer but whose body is deteriorating including his speech and vision; middle son Gene (Matt Stabile) is a trendy director of commercials with dreams of Hollywood; and finally, Kia (Betsy Graver) is Gene’s gorgeous bubblehead girlfriend of the moment who is a blithe bull in the emotional china shop unknowingly saying the most insensitive thing possible at all times.

As the family dynamics begin to whirr, the de rigeur baggage spills out including infidelities real and hoped for, estrangements, an inability to have a child contrasting with an unwanted pregnancy. There are moments of hilarity including the most original use for a Yahrzeit candle ever imagined for the stage. But above all, Laufer and St. Leon depict people who ostensibly care for each other but who are so wrapped up in their own pain that they have difficulty connecting with each other.

Especially interesting is how Kia, who is too self-involved to be aware of the damage she wreaks with every comment, is actually a catalyst for the self-realizations that some of the Schwartzes stumble upon.

While this production succeeds in getting the requisite laughs and choked throats, the pieces don’t fit together comfortably in the same show, which may be Laufer’s fault or St. Leon’s. The idea that The Last Schwartz is about Boomers dealing with tradition, heritage and the like nearly lost somewhere.

Instead, the strength of this show is how St. Leon gets vivid performances from her cast. Ostrenko, in particular, starts out a laughably woebegone loser with a lack of self-esteem. Yet Ostrenko peels away layers until she reveals a pitiable human being that no one dare laugh at.

Graver has done more than her share of these dimbulb roles despite proving an admirable range in Lungs and Venus In Fur. But those roles pay off: She absolutely nails Kia’s carefree thoughtlessness while hinting that Kia may actually be the least dysfunctional of anyone in the story.

Clement reinforces his status as one of the region’s leading Everyman-next-door with terrific comic timing. His look of rapt lust as he listens to Kia blather about some nonsense is priceless.

Della Ventura is convincing as the son who might be a genius or autistic or both, fatalistically trying to shut out the furor around him.

Stabile deftly makes Gene seem like someone who feels almost like a visitor in his own family.

Caplin has the tough role of the martinet who is never sympathetic, yet who is just as desperate in her loneliness as any of her siblings.

Absolutely Ridiculously Miserable Audience Behavior Department: This is for you, lady. Yeah, you, with the bottled red hair sitting about two-thirds of the way toward the back of the house with her poor husband in the light blue golf shirt at the Sunday matinee. Explain to me, lady, why you bother to go to theater. During the most heart-rending moment of the play, when Ostrenko is acting her guts out, that’s when you, lady, choose to open up your flip phone with the brightly lit display and start dialing. Dialing! Were you expecting a voice mail from President Obama seeking advice on the Syrian talks? Were you hoping for good news from the kidney transplant center? What? This wasn’t someone who forgot their phone was still on but someone who turned on their phone because they felt their inability to appreciate good theater entitled them to violate everyone else’s experience.