Posted on February 3, 2014 by Bill Hirschman 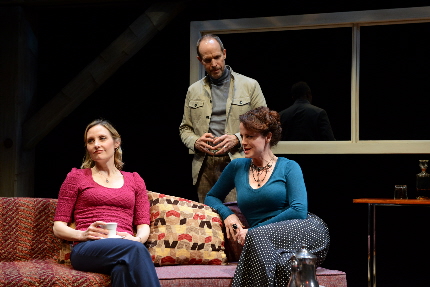 Anyone who tells you they understood every beat of Old Times at Palm Beach Dramaworks is probably lying. But investing close attention to Harold Pinter’s play will be rewarded with a theatrical experience to roll around the mind and debate over dinner for days to come.

It’s not comfortable or entertaining being perpetually several steps behind the characters in understanding what is going on – if you follow it at all. But it’s likely that the late Mr. Pinter didn’t care whether you walk away with a perfect grasp of the proceedings so long as you walk away thinking.

So credit director J. Barry Lewis and a trio of very skilled actors for expertly delivering a decidedly difficult piece that will enthrall some audience members and prompt others to wish there was an intermission during which they could leave. The latter aren’t necessarily stupid or unsophisticated; this may not be what they seek in a night of theater. But the former should be fascinated at this examination of how unreliable memories can be and how they may affect interpersonal relationships.

In either case, be warned: This is not passive theater in which you can sit back and demand, “entertain me.” You’re a partner in this and it requires you stay alert, analyze what you see and hear, even though you won’t know, can’t know and aren’t supposed to know what’s true.

The Nobel laureate wrote this play in 1971 and 43 years later, it’s still more intellectually challenging than most of the self-indulgent products of the avant-garde successors he helped whelp.

Pinter depicts a middle-class couple in their 40s, Deeley and Kate, living on the western coast of England. They are visited by Anna, who was Kate’s roommate in London 20 years earlier. For 75 minutes the trio natters about banal and disconnected topics, spiced up by rambling reveries about their meetings in the past. But that contrasts with our intuitive perception that tensions are brewing underneath. What becomes marginally clearer is that the self-satisfied Deeley and the vivacious Anna are using their recollections as weapons in a tug of war to claim dominion over the reserved Kate.

The glory and frustration in this script – and what makes it opaque to many – is its primary point: the unreliability of memory. Each narrative is so different that it takes a while to realize that they are all talking about the same two or three incidents. Even though these stories conflict, no one objects to the discrepancies. Is someone making up a story from whole cloth? Has their memory just deteriorated? Is their memory crippled by self-serving perception? And since everyone remembers what they want how they want, no one succeeds in winning Kate’s allegiance.

Reality is like an object whose outline is perceived under several feet of murky water. Over time, the object rises toward the surface, but while the outline becomes clearer, we never find out what the object is.

Literary critics have had a field day interpreting the proceedings including that Anna is a murder victim when the play opens or that the whole thing isn’t really happening or that Kate and Anna are different sides of the same woman’s personality. It doesn’t matter.

Being Pinter, the play is filled with pungent silences perfectly played by the actors and paced by Lewis. We may not know what’s going on behind these pauses, but we know something unsettling and unnerving is swirling inside. It takes a great deal of theatrical courage and skill to let these silences drag out, but it certainly underscores the insufficiency of language as a means of communication that actually connects people.

Creating the illusion that something specific roiling under the surface is the triumph of Lewis and his cast: Craig Wroe as the husband, Shannon Koob as the wife and Pilar Witherspoon as the interloper. This is terribly difficult and not for amateurs. Lewis is one of the few directors in the region who has a fighting chance with this material. Among his proven strengths is the ability to lead a cast in analyzing a script, insisting that the intention of even the most ambiguous material be clear at least to the actors.

Perhaps the highest praise is due Dramaworks’ founders William
Hayes and Sue Ellen Beryl simply for attempting the work because other than Promethean Theatre’s The Dumb Waiter in 2010 and Dramaworks’ Betrayal in 2007, it’s hard to recall any professional theater in South Florida mounting any Pinter in the past 20 years. Then again, these are the folks who produced Ionesco’s absurdist The Chairs and Albee’s nearly impenetrable Three Tall Women.

Hayes likes to say that when Dramaworks mounts less challenging material, some of his audience members complain that they can get that elsewhere. They come to Dramaworks to think. Well, they get their wish here in spades.

Side note:  Dramaworks has one of the best and possibly most effective turn-off-your-cellphone announcements. The audience hubbub is just beginning to ebb because the house manager is poised to come on stage to greet the audience. Suddenly, a cell phone can be heard blaring, causing everyone to look around. Then a second ring sounds, this one clearly coming from the auditorium’s speakers. Then a third, then a dozen creating a cacophony over the auditorium. It takes an especially dense self-centered theatergoer not to think someone is trying to send them a message.