Actor goes from Zero to 70 in Mostel play 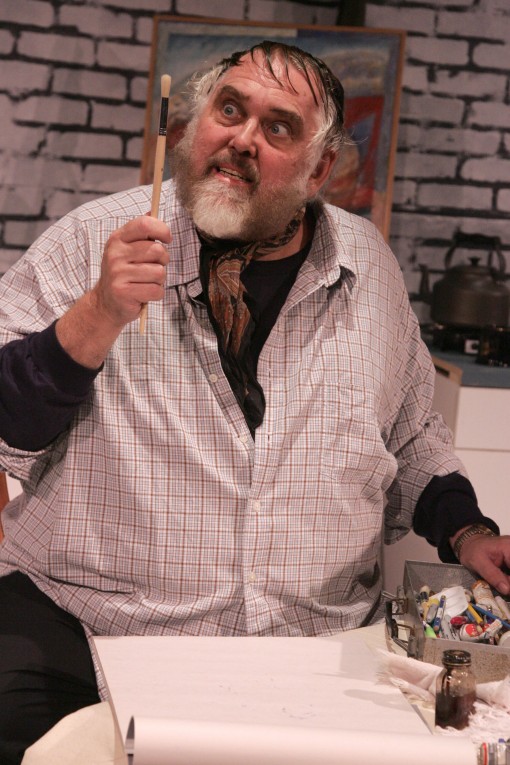 Not since George C. Scott has an actor impersonated righteous outrage with the skill and intensity that Jim Brochu brings to Zero Mostel’s paint-blistering jeremiad against colleagues naming names during the 1950s in Zero Hour.

Brochu’s railing against the betrayal of choreographer Jerome Robbins and the fatal fallout for blacklisted actor Philip Loeb qualifies as a pure Category 5 hurricane.

The one-man biographical play, which returned Wednesday to the Aventura Arts & Cultural Center, has only deepened since Brochu triumphed with it at the Broward Stage Door in 2008, winning a Carbonell Award for best actor. Brochu subsequently tweaked the 2006 script for later outings including three acclaimed stints off-Broadway.

Brochu doesn’t impersonate but inhabits the mercurial actor whose passionate loves, hatreds and obsessions are emblematic of a voracious appetite for life that threatens to consume everything around him including the audience.

Through furious tirades and loving recollections, Brochu traces the life of a walking volcano whose true love was painting, but who survived the blacklist to become the iconic stage star of Fiddler on the Roof, A Funny Thing Happened on the Way to the Forum and Ionesco’s Rhinoceros ‘ and created the lead in a little movie called The Producers.

As with every one-man show since Elizabethan times, we have an artificial framing conceit. In this case a hapless New York Times reporter comes to interview Mostel in his painter’s aerie in 1977. But surprisingly, Brochu makes the conceit theatrically valid because he is constantly interrupting his torrent of stories to berate, cross-examine and interact with his unseen and unheard visitor. What Brochu never mentions, but theater geeks know, is this fictional interview is set weeks before Mostel would die during an out of town tryout of Arnold Wesker’s The Merchant.

Mostel instantly grabs control over the interview but willingly reveals little known backstories behind the signature roles of his career. For instance, the lasting rejection of his own parents to his mixed marriage nearly crippled his ability to play Tevye ostrascizing his own daughter in Fiddler.

The script is laden with quips, rejoinders, retorts, one-liners and word play. But mostly it’s Mostel waddling around his studio telling stories or recreating scenes such as his testimony to the House Un-American Activities Committee. Amazingly, there is only a whiff of ‘and then I performed in such and such’.” or name-dropping for its own sake. Mostel is giving his interviewee a performance because, for him, life is art, and art is performance.

Several recent local productions have suffered from weak central performances. But in the opening scenes here (interesting but not as inherently powerful material as the blacklist) Brochu delivers a textbook example of how top spin, charisma and sheer skill can carry a show ‘ just like Mostel himself would have done
.
In real life, Brochu only resembles Mostel in his mountainous body. But in character, he has Mostel’s round beady eyes peering out from under craggy eyebrows, the hunched over posture and the errant strands of sweat-slicked hair brushed back over his balding head. He has nailed Mostel’s penchant for standing in profile and shooting a sideways glare of surprise, suspicion or contempt. Most of the time, he has Mostel’s vocal cadences and intonations, and occasionally repeats a line we know from a movie or a recording that sounds as if he were channeling Mostel’s spirit at a s’ance.

But this is far more than a nightclub impressionist’s turn. As a writer and an actor, Brochu has captured the soul of a difficult man who could be tender and terrifying, playful and combative, all in the space a few seconds.

A side note: This six-month-old facility attached to a school and community center several blocks southeast of the Aventura Mall is operated by the Broward Center for the Performing Arts, as it does with the Parker Playhouse. It’s a 324-seat auditorium with an attractive d’cor, apparently good acoustics and fine sight lines. Its lobby has a postcard view of Biscayne Bay, but the amount of parking immediately adjacent to the theater is limited.