Even with flaws, Promethean’s new play of Cuban sisters is compelling and hilarious 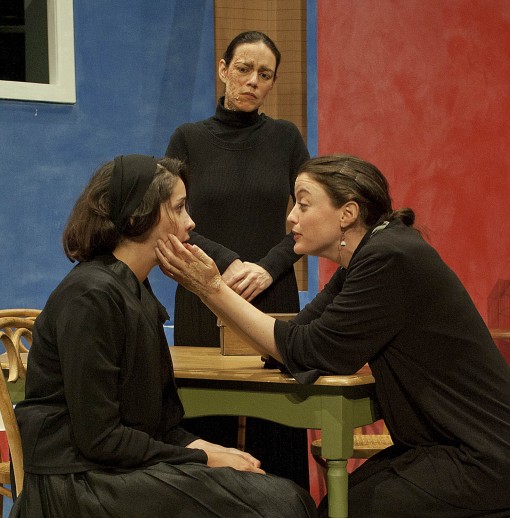 A Bearded Lover turns on the revelation of secret after secret ‘ secrets that three sisters keep from each other, other secrets that playwright Juan C. Sanchez keeps from the audience and parcels out over two hours.

The secrets are so crucial” although you’ll see a few coming ”that it’s difficult to sketch the plot without giving too much away. Essentially, three Cuban sisters scarred as children in a fire are closing up their house in 1953 while preparing ‘to escape to the sea.’ As they pack up their belongings, those secrets seep out and their scheme does not go quite as planned.

The play that had its world premiere Friday at The Promethean Theatre is simultaneously satisfying and schizophrenic: 75 percent broad hilarious comedy, 25 percent harrowing family drama. Each facet thoroughly succeeds on its own, yet each undercuts the other enough that the piece doesn’t land as solidly as it might. This is most visible in the penultimate scene when a devastating secret is confirmed during a violent struggle ‘ and deflated by two belly-laugh punchlines.

But even with these and other flaws, there’s little doubt that Sanchez’s theatrical imagination, the propulsive direction of Margaret M. Ledford, the vibrant performances of Deborah L. Sherman, Ursula Cataan and Gladys Ramirez all coalesce into a terribly funny and ultimately affecting evening that is well-worth seeing.

All five have recreated the devotion, wounds and well-worn verbal byplay of any family. But these sisters have been driven even closer by the disfigurement that distances them from their small-town neighbors. They accuse each other of being lifeless, but they are vital, indulgently melodramatic and exploding with outsized passion through the comic push and pull of sibling affection and rivalry.

Sanchez, a Miamian who wrote Red Tide and Buck Fever for Promethean, keeps delivering ever-more intriguing scripts although each needs to work out shortcomings. He deftly depicts a family portrait as if he had been eavesdropping. But little action occurs until the last scenes of the play, so while he creates fascinating characters, their sparring could be trimmed further.

If you think about the play after it ends, some of the outcomes don’t completely ring true. And long before the curtain call, you may question whether the sisters would be absorbed by mundane discussions and childish squabbles hours before their final departure. Perhaps that’s Sanchez illustrating an existential philosophy of how people dribble out their lives.

Sanchez puts appropriately prosaic language into their mouths, but occasionally he gifts them with lovely imagistic metaphors such as inhaling the cologne on a blanket made by their mother, the sole possession rescued from the fire. That leads to identical speeches about the danger of digging too deeply into surface relationships: ‘Certain things, Lucia, certain beautiful things should only be looked at, admired from a distance, but never touched. I didn’t want to soil it.’

The sisters refer to Cuban politics and culture but other than one key offstage encounter with a historical figure, the underlying meat of the play could be set anywhere and anytime. There are no Spanish accents and little of the language’s musical cadence except in a few poetic descriptions. Sanchez’s dialogue is peppered with anachronistic American slang and clich’s (‘Put a lid on it’ / ‘Don’t shoot the messenger’) that ring false for Cubans in 1953. All of that may be an attempt to make it universal, but you yearn for a little more genuine Cuban flavor.

Sanchez has created a compelling swirl of family dynamics, but credit Ledford and the actresses for creating even more multi-dimensional creatures. Some scenes are immensely funny, due to what Ledford and the actresses do with the script. Two sisters razz the third about her new best friend, starting out simply saying the woman is a pig. But then they punctuate the entire scene with ever more frequent accompaniment of snorts, squeals and oinks that are not in the script.

Sherman, co-founder of Promethean, adds another unique portrait to her resume. Dolores, the eldest sister, is a would-be poet ecstatically over-dramatizing every emotion to hilarious effect. Her squints and grins, the way she angles her posture and her hands, and her stilted vocal inflections wring laughs out of every line. When the play turns dark, Sherman negotiates the hairpin turns easily.

Cataan comes back to Florida where she was a former stalwart of New Theatre. She nails Sanchez’s creation of Ines, the embittered middle sister who punctures her sisters’ rosy outlook with cold, clear-eyed assessments. Among Cataan’s talents is to start one of Sanchez’s lines in a conversational tone and then twist it mid-sentence into a cruelly cutting criticism.

Ramirez’s Lucia is the youngest sister who cannot walk without crutchesthat are too short for her. Yet Ramirez, Sanchez and Ledford make her the sunniest, most playful of the trio.

Ledford again proves her skill at eliciting strong performances and creating stage pictures without you noticing it. If Sanchez’s script runs a shade too long, Ledford never lets up the pace except for variety.