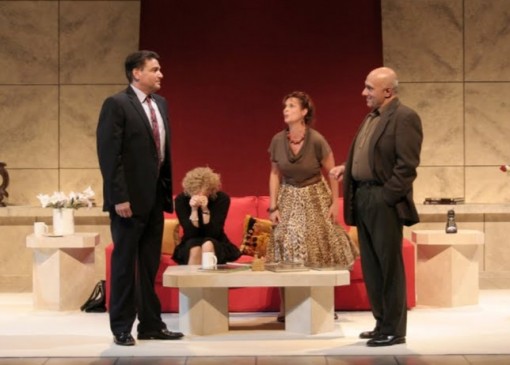 "God of Carnage" plays at the Caldwell Theatre through May 15.

Bravo TV’s parade of The Real Housewives of Orange County — and Atlanta, Miami and Wichita — relies on the conviction that few things are as satisfying as watching adults behaving badly.

So does Yasmina Reza, the playwright behind 2009’s monster Broadway hit comedy,’God of Carnage, a vicarious delight of watching the civilized veneer of self-assured sophisticates disintegrate.

The version that opened Friday at the Caldwell Theatre with a first-rate cast and director is not quite as vicious and malicious as the New York edition’s reputation for a savage slugfest would lead you to expect. There are more belly laughs than gasps.

While horrible things are said and done in this edition, it’s mostly manners and civility giving way to uninhibited emotions and uncensored prejudices rather than a devolution into the dog-eat-dog roots of survival.

Instead, the production, expertly paced by director Kenneth Kay, lampoons the fragility and hypocrisy of the devices we use to lubricate social interaction: the meaningless banter, the forced smiles, the insincere agreements, the perfunctory but false forgiveness — anything to prevent our differences and self-interests from abrading each other raw. Reza leads you to expect a nuclear detonation that never quite arrives, which leaves the dramatic arc just a tinge unsatisfying.

The play is set in the stylish living room of an upscale Brooklyn couple, Michael and Veronica Novak (Michael Serratore and Kim Cozort). Sitting uncomfortably between them on a couch are the equally well-heeled Alan and Annette Raleigh (Nick Santa Maria and Kim Ostrenko).

The four have met to sort out why the Raleighs’ 11’year-old smacked the Novaks’ son with a stick and what to do about it. The confab is suffused with a strained politeness that almost seems collegial in the manner of parents sharing war stories about the wearying challenge of child-rearing. They are acting like adults, using all their restraint and manners to negotiate these shoals ‘ especially since the attack was not wholly unprovoked.

During an intermissionless 90 minutes, the situation falls apart as each side becomes defensive, accusatory and then furious, fueled by copious amounts of rum and recriminations. The results are a comic descent into bickering, squabbling and even a few wrestling matches.

Much is said about adults acting like children. No, these adults scrap and spar but they are anything but childlike. They have a lifetime’s experience spotting vulnerabilities to more effectively wound other people.

More interestingly, the easing of social niceties allows the baggage within each person and their marriages to drive wedges deeper into the marrow of their relationships. They expose near-fatal fissures that have nothing to do with the fight between their kids.

Allegiances shift as the couples gang up on each other verbally, emotionally and physically, but the teams rearrange later into the men against the women and three against one individual, then three against someone else.

It also features an already legendary scene of projectile vomiting when Annette becomes so upset at the quarrelling that her stomach rebels. Surprisingly, it doesn’t cause nausea in many audience members (I’d be the first if it would). But it may be the first time in theater history that hurling produces an audience ovation as if the special effect was a helicopter landing in Saigon or a chandelier crashing at the Paris opera.

If you believe a script only has to suggest a framework of what is to be staged, then Reza’s works. But since she writes primarily dialogue as she did in the script of’Art, it requires a cast and director to excavate every shred of meaning, to create three-dimensional characters and to plot out physical movements.

Frankly, it’s hard to praise the script as a major work of theatrical art like O’Neill or even Neil Simon. In fact, some of the characters’ pronouncements about Mankind’s baser nature must seem awful dry and pretentious just printed on paper and even ring a bit ham-handed on stage. It’s not even clear that Reza ends her play; she just leaves everyone lying around exhausted like the combatants in’Who’s Afraid of Virginia Woolf.

That makes the considerable accomplishment of Kay and Company all the more laudable in clothing that framework with a fully-fleshed out evening of theater.

A lot of the acting is in facial reactions: Ostrenko’s glares as her lawyer husband takes dozens of cell phone calls from work in the midst of this gauntlet, Cozort’s angled head turned in disgust at everyone’s dismissal of her liberal philosophies, Serratore’s determination to smile through insults when his blue-collar background makes him want to smack someone, Santa Maria’s drunken dopey grin of surrender as he realizes the entire situation including his marriage is imploding.

Credit also to Kay’s staging, such as the way he positions people across the room to illustrate who’s opposing who for the moment. Body language is especially inventive as the four starts off in erect, constricted postures but end up sprawled over the furniture laid low by exertion and liquor.

The quartet’s attempt to clean up after Annette’s accident is especially funny. Serratore grimaces as he simultaneously tries to mop up the damage to a precious coffee-table book but fights to keep from heaving himself. Cozort steps gingerly around invisible stains on the carpet with contortions that look like she’s playing a game of Twister.

Kudos to Tim Bennett’s plush urbanite apartment, all beige marble tiles and carpet set off by a ruby red upholstered furniture and a huge swatch of burgundy-colored cloth sloping from the ceiling to the floor, carefully arranged stacks of art books and a low marble enclosure that is supposed to suggest the living room as a sandbox but really gives the sense of an very expensive arena.