An appendage odyssey with much black humor along the way 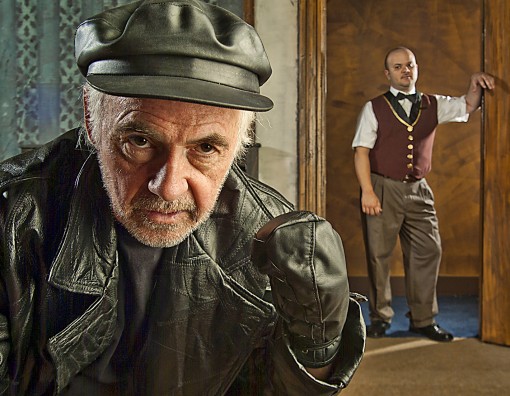 Playwright Martin McDonagh steps out of his familiar Irish milieu with his latest play, A Behanding in Spokane, painting a portrait of an American sociopath on a mission to reclaim what’s his.’The play, which ran on Broadway earlier this year starring Christopher Walken, made its southeastern premiere at GableStage Saturday night.

Joseph Adler, artistic director of the Coral Gables company, has a taste for bizarre situations, and enjoys theatre that makes his audience uncomfortable, because discomfort leads to discussion.’ And while A Behanding in Spokane is more commercial than other McDonagh plays, it’s certainly a play to spark conversation.

The lights come up on scenic designer Lyle Baskin’s atmospherically seedy hotel room. You know nothing good has ever happened in this room, and judging from the craggy older man with a missing left hand sitting on the bed, dressed head to toe in black and smoking a cigarette, you know the room’s losing streak will continue. Squeals come from the closet. Annoyed, he gets up, opens the closet door, and fires a gun into it. The squealing stops. A body falls. He closes the door, goes back to the bed, and calls his mother.

That’s classic McDonagh, abrupt violence mixed with off-kilter comedy. A Behanding in Spokane is a comedy, and a very funny one, even if there is often a feeling that the audience doesn’t know if it’s okay or not to laugh.

Carmichael (Dennis Creaghan) has spent nearly half a century searching for his missing hand. That search has brought him to this hotel room, probably the latest in a long line of similar rooms he’s occupied on his quest. He’s agreed to pay a tidy sum to a couple of small-time pot dealers Toby (Marckensen Charles) and Marilyn (Jackie Rivera) who claim to have his lost hand.’ When the scam goes south, Carmichael comes up with some imaginatively sadistic methods to exact his revenge. Toss in Mervyn, (Erik Fabregat) a desk clerk with a slight hero complex and a big death wish, and A Behanding in Spokane roars furiously down a road of eccentric absurdity.

Creaghan hits all the right notes as Carmichael, the vengeful resignation, the glimmer of hope, the dry sense of humor. Credit both McDonagh’s writing and Creaghan’s deliciously wicked performance for making Carmichael such a fascinating and sympathetic character. He shouldn’t be likable. He’s blatantly racist, cruel, and single-minded in his pursuit of vengeance.

But the hope he clings to of recovering his hand, is admirable, and a little endearing. One wonders what he would have made of his life were it not for an unprovoked act of violence as a teenager, and what he was like before that moment that would define his life. As Toby observes, with that kind of single-mindedness, if Carmichael had, say, been on a quest for a clean environment, we’d have the cleanest environment there could be, and no one would dare risk his wrath over an oil spill.

Charles, who made such a splash earlier this year in Groundswell, is once again impressive here, although McDonagh’s writing for this character is not as unique as the others. Toby, right down to his name, is written as a stereotype, and while Marckenson wrings the humor from his character, it’s disappointing writing coming from McDonagh.

Rivera, so good in GableStage’s Speech and Debate last June, is very funny here, even though her role is often to represent the audience’s point of view, by calling Carmichael on his homophobia and racism.

Fabregat’s look and demeanor are perfect for his role as Mervyn. He gets some of the play’s best lines, and certainly the best monologue, which reveals both his character and McDonagh’s singular voice. Some of the play’s most interesting scenes are when Carmichael and Mervyn are alone together; their conversation has an edge and Creaghan and Fabregat are riveting to watch.

A Behanding in Spokane is ninety minutes of entertainment, especially if you like your comedy with a heaping helpful of violence. And if you don’t already, McDonagh and GableStage will change your mind.