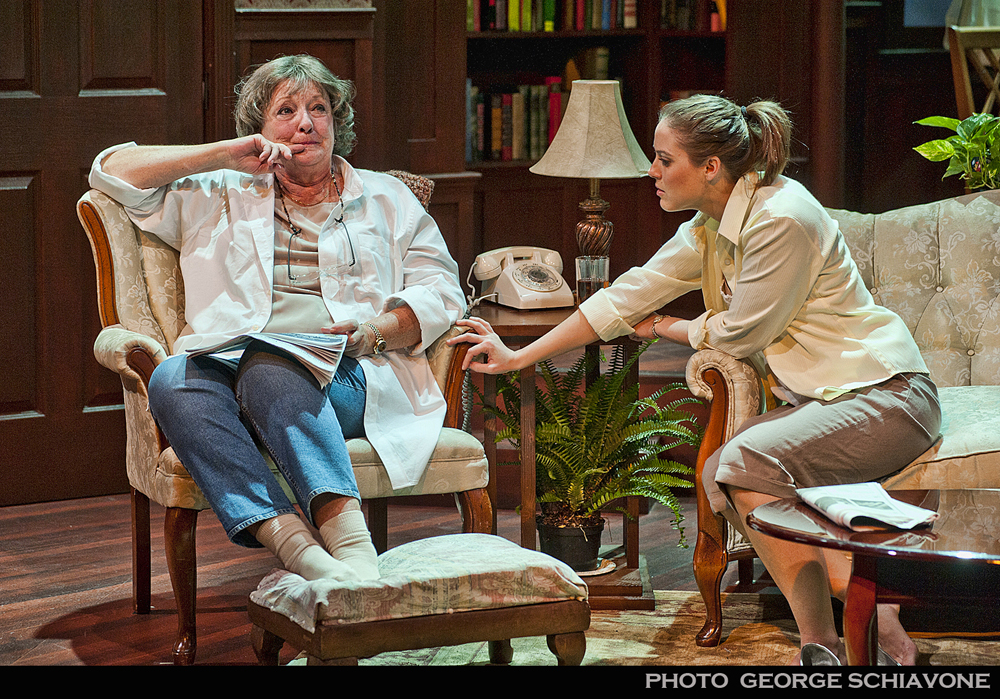 The temptation is to liken Barbara Bradshaw and Kim Morgan Dean’s performances in Mosaic Theatre’s Collected Stories to shooting stars intertwining on their blazing path across the heavens.

But the miraculous artistry on display Friday was pointedly not pyrotechnic. These virtuosos seemed so naturalistic that you almost never caught them acting, and yet, under Margaret Ledford’s direction, the pair deliver portrayals of a mentor and student that are mesmerizing.

”’ The arc of the plot is no surprise. As soon as Ruth reveals a particularly precious and painful memory, you can see the freight train bearing down the tracks. Just to help you along, Margulies strews portentous lines through the evening that foreshadow a literary riff on All About Eve. (‘You can’t censor your creative feelings because of the danger of hurting someone’s feelings,’ Ruth tells Lisa.)

But Margulies’ objective is to dig far deeper into the morality of making art than echoing that film’s straightforward condemnation of ambitious treachery. He explores the cannibalistic nature of artists scavenging inspiration from the lives around them when they cannot find what they need inside their own experience. He illustrates the considerable pressure of early success and the very real fear of a sophomore slump.

”’ In fact, once the expected trap is sprung, the confrontation is far from a one-sided exposure of betrayer and betrayed in a shouting match of dramatically satisfying recriminations. Lisa at first feigns surprise at her mentor’s anger. Then she unapologetically cross-examines Ruth’s rationalizations and mutual culpability in creating rules of engagement that enabled Lisa’s reprehensible actions.

”’ It’s a good script, but these are stunning performances, deftly directed. Naturalistic acting is hard work. You apply myriad pauses and looks and intonations, and then try to erase any sign of that technique. As another theater’s recent production proved, simply blunting the level of emotional reactions doesn’t work.

”’ But here, the audience is in expert hands. Some playgoers remember Bradshaw’s range from decades past, but most audience members recall only her recent string of brilliant portrayals of slightly dotty mothers and doyennes in absurdist comedies (The Chairs, Shear Madness and Why Torture is Wrong).

”’ So it will surprise some newcomers that her dramatic chops are every bit as honed and effective. There is one passage ‘ Ruth’s long reverie about her youthful love affair with a doomed poet ‘ that is simply transcendent. To be that convincing and to inject such a variety of line readings into such a long monologue is the work of a master actor.

”’ When Lisa says early in the play, ‘Your voice has been inside my head since high school,’ it’s instructive to watch Bradshaw’s Ruth subtly squirm with the knowledge that she can never live up to such adulation.

”’ Dean has always been a hypnotic actress projecting raw talent, beauty and charisma in such shows as Playhouse Creatures at The Women’s Theatre Project and Mosaic’s Body of Water. But her recent foray to make it in New York City has only deepened her skill. Her gleaming eyes radiate an intensity that seems hungry to add some of your life-force to her own, and she emits an alloy of calm confidence and barely restrained enthusiasm.

”’ The actresses have worked together before and they have a professional and personal relationship that pays off here. It’s not so much synergistic chemistry as much as trapeze artists who know each others’ moves, know where each other is supposed to be at any moment and know they will be there.

”’ Ledford’s direction would seem flawless, seamless and inventive ‘ except that it is so invisible that few people will realize that there is a sensitive, insightful ‘intelligence unifying and guiding Bradshaw, Dean and the creative staff. In lesser hands, you’d admire two skilled players volleying in an exhibition tennis game. But Ledford and company paper over any self-conscious theatricality so you can fool yourself into thinking you’re just eavesdropping. In fact, if there is any flaw (and you can persuasively argue that it’s a virtue), it’s that the two actresses rarely let loose a satisfyingly operatic rage in the confrontation scene.

”’ Scenic designer Douglas Grinn has built Ruth’s cozy Greenwich Village walk-up that has the feel of having been lived in for 30 years. Jeff Quinn’s lighting not only shows the passage of time during the day, but has Ruth sit in semi-darkness when she is upset. Costumer K. Blair Brown provides clothing reflecting Lisa’s changing relationship ‘ from a college student wearing her best outfit to a colleague lounging around in informal house clothes to an assured young woman wearing a fancy little black dress for a public reading.

”’ This calendar year has gifted South Florida with some terrific evenings in the theater such as Fifty Words and Blasted. But, it doesn’t get much better than this.