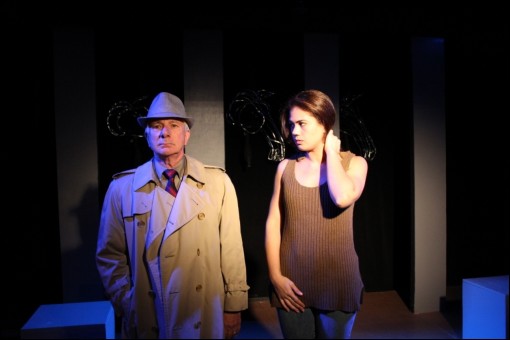 "Equus" runs through May 7 at Andrews Living Arts Studio.

A key line in Equus, Peter Shaffer’s play about a troubled teenager who blinds horses, is ‘The extremity is the point.’ But that seems lost on the Andrews Living Arts Studio production that opened in Fort Lauderdale on Friday.’

This edition delivers some evocative stagecraft in recreating the hallucinogenic memories of the psychotic teen, but the first two-thirds of this play about raging passion is simply listless. Only in the final third does the production begin to connect with the angst of the material.’

The acting sculpted by Andrews’ founder and director Robert D. Nation is consistently flat and limp for much of the evening. Almost all the actors speak in the same tone of voice, same volume, same inflections for every line until the climax. The only things that ebb and flow are the British accents.’

Strang’s fervor, no matter how misplaced, forces Dysart to confront his own emotional impotence engendered by a society that values predictable conformity over impulsive individuality. Dysart comes to question the wisdom of ‘curing’ the boy by robbing him of the primitive passion that has become the core of his life.’

While Shaffer’s script has a few flaws, it contains brilliantly articulate monologues for Dysart and indulges in the theatricality that Shaffer adored, notably using tall dancers to mime sensual horses seemingly drawn from the dark abyss of some pagan mythology.’

The problem is that Equus absolutely requires two superb actors to play Dysart and Alan. Joseph, who hasn’t seen 17 in a long, long time, is adequate if not especially compelling. He has a slightly squinty off-kilter expression and a well-toned torso, both of which are appropriate for a child of nature who doesn’t fit into the ‘normal world.”

But he doesn’t drive the story; this is Dysart’s journey of self-discovery. Dysart has to be a contradiction. He bemoans his lack of passion, yet he’s actually in emotional agony about his emptiness from the moment the lights come up.

But Shuman shuffles along like a tweedy old boffin until the second act and even then only begins to seem agitated. Otherwise, we get’a burned-out case who long ago surrendered any dream other than mediocrity. That may give Shuman somewhere to grow emotionally during the evening, but he’s not much of a travelling companion.’

The year-old company’s staff including Eric Bare and Ryan Nation does have a knack for using a handful of lights, digital sound, a fog machine and staging to create Alan’s surreal reveries of riding the horses in the dead of night ‘ and does it with a shoestring budget.’

Those scenes are helped by the performances of Domingos Sobrinho, Nicholas Machado and Joseph O’Neill as the three horses (budget constraints cut the other three from the original script). They provide a frisson of danger whether just standing still wearing skeletal horse masks or prancing wildly to ecstatic choreography designed by Michael Joseph.’

Although this is staged in an intimate 50-seat converted warehouse/garage, director Nation bravely embraces the crucial in-your-face sexuality. Alan’s sexual confusion is a key to his problem, so the buff actors playing horses are bare-chested and wearing beige hosiery that do little to hide their physiques. Joseph and the lovely Nastasha Savignon as a stablegirl who tries to open him up him perform their crucial nude encounter without a shred of self-consciousness. ‘

Like many fledgling enterprises, Andrews Living Arts Studio delivers evidence that future productions may be worth checking out. But this one approaches competency only as the plot closes in on the climax.’