“Dusk” delves into bittersweet regret at the Mosaic Theatre 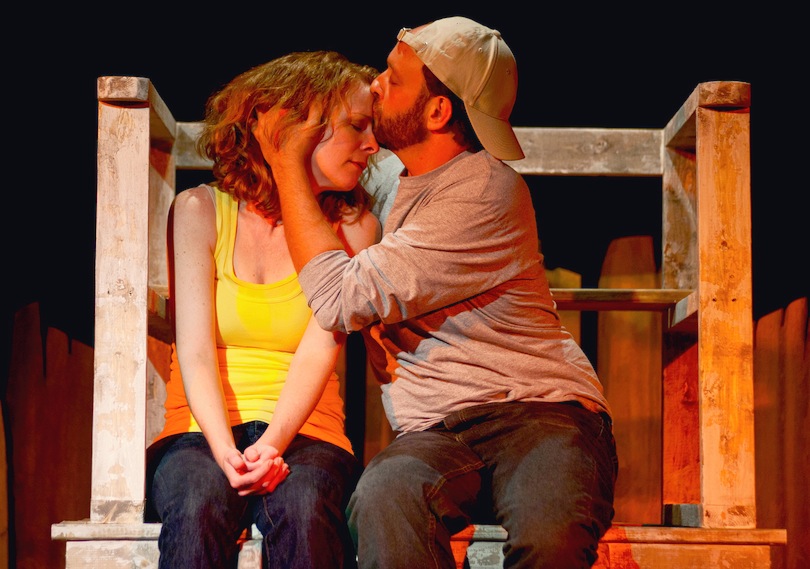 A reunion or any trip back home, is fraught with danger: We see how far we’ve come, but we’re rarely where we thought we’d be or as far along as we once hoped.

Stephen Belber’s emotionally dense drama Dusk Rings A Bell at the Mosaic Theatre delved deeply into a half-dozen themes Saturday. But the most easily discernible is the bittersweet disappointment in ourselves because of the paths we take after that shining moment in late adolescence when all we see are possibilities.

Jenny McKnight and Gregg Weiner portray lonely 39-year-olds who spent one glorious summer evening together as teenagers. They collide once again outside a Chesapeake Bay boardwalk this winter and discover that although their lives have diverged wildly, they are drawn to explore, possibly even recapture that watershed moment.

Director Richard Jay Simon’s excavation of Belber’s script, imbued with rue and compassion, wasn’t thrilling or overwhelming, but Dusk proved quietly and persistently intriguing. Their work together was packed with so many insights into human frailty that audience members might want a second viewing just to process all that is rushing by in a whitewater rapids of ideas.

The play opens with lengthy monologues delivered by Molly, an attractive Washington D.C. public relations executive for CNN — a consummate sophisticate emotionally adrift and seeking some dry land. She breaks into a summer cabin where, at age 14, she hid a letter that she wrote to her adult self. At the time, the note memorialized an epiphany that gave her the confidence to go forward her life and she presciently left it for her 39-year-old self like a pep talk in a time capsule.

Molly is confronted by the caretaker, Ray, a blunted soul who has spent his life trying to cope with the blight of a horrible transgression that occurred soon after their initial tryst.’Simon and Belber choreograph the pair’s attempt to connect both to each other and to what they represent to each other. Initially, they seem socially, intellectually at odds, but neither is what they appear. As they awkwardly waltz through 90 minutes, Belber also has the two investigate why we don’t always take the responsibility to prevent violence and charts the tortuous path of redemptive reclamation.

The initial virtue is Simon’s choice of script. Belber (author of Tape and Match) probes beyond the 21st Century trope of regret over the road not taken; he tries to explain why we didn’t take those roads. The icing on the pastry is his skill at illustrating characters simply by their different use of language ‘ straightforward for the wary Ray; profligately Byzantine for the hyper-articulate Molly.

McKnight, a Chicago-based actress, charms the audience with her seemingly self-possessed urbanite barely aware of her unresolved issues. McKnight makes the most of Molly’s sly wit and self-awareness to humanize a character we might otherwise find irritating. McKnight is especially skilled at smoothly unreeling Molly’s pyrotechnic facility with words. She gives you the sense that Molly has been unconsciously using the fog of verbiage to keep introspection at arm’s length.

Weiner, who picked up his fifth Carbonell Award last week, delivers an unassailably solid performance of someone weary from a decade of consciously reining his reactions.’But as a replacement for an ailing actor, Weiner gives off a sense that he will be able to dig deeper into the character after another performance or two. What he puts across clearly is the sense that Roy, who has some serious baggage, is actually the more well-adjusted of the two.

Simon’s physical staging is extremely simple. The actors mostly stand to deliver monologues or sit in pairs for the dialogue scenes. While it feels just a shade static, it focuses us on the words being spoken, as you suspect Simon intended. Belber would be pleased how Simon gently peels away the protagonists’ dissimilar social, class and economic ground clutter to expose their true problems which resonate with each other.

Thomas Wolfe warned us that you can’t go home again, so there’s an unavoidable frisson of Belber and his characters being unable to close the dramatic circle in a satisfying way. To compensate, Belber tops it off with an idyllic flashback coda that underscores what we’ve seen rather than resolve it. Like what the characters tell themselves, it’s an illusory resolution.