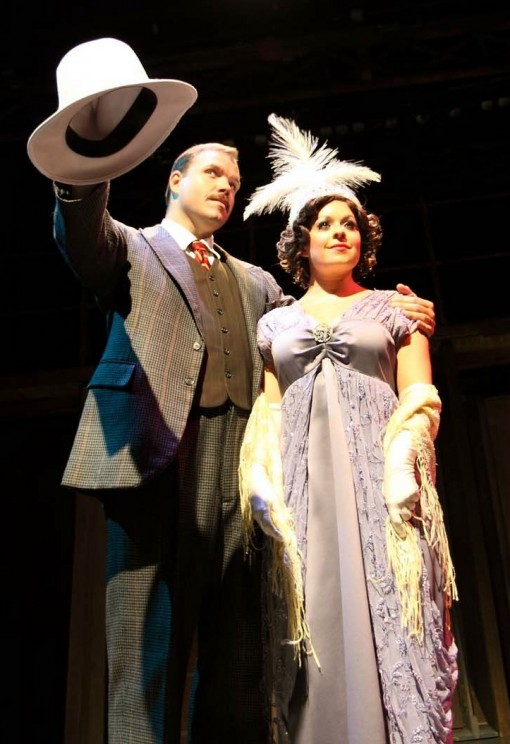 The real-life story of director Mack Sennett and actress Mabel Normand is the stuff that movies–and musicals–are made of. Their romance, and the scrappiness of the silent movie era, are brought to vivid life in the Stage Door Theatre’s production of Mack and Mabel.

Mack Sennett and Mabel Normand are names largely forgotten today by all but the most ardent silent-movie lovers, but they were among the Hollywood royalty of their day. Sennett loved to make the world laugh, and was an innovator of the comic conventions of slapstick–the pie in the face, the bumbling Keystone Kops, the wild chase. Normand was his leading lady, possessing the face of the girl next door and the soul of a comedienne. Together they made movie magic in hundreds of short films in the teens and twenties, at the dawn of the motion picture industry.

Mack and Mabel, produced on Broadway in 1974 with a score by Jerry Herman and book by Michael Stewart, plays fast and loose with timelines and background info, but the essence of the relationship and the world of silent pictures is intact. The story follows the characters’ rise and fall in motion pictures, with Mabel playing Trilby to Sennett’s Svengali. The two were linked personally as well as professionally, with the two relationships spilling over into one another, resulting in a star-crossed love affair.

In addition to exploring the lives of Sennett and Normand, Mack and Mabel details the silent movie era they lived in, a glorious world of reinvention and creation. To further illustrate the cinematic art form portrayed on stage, a screen above the stage shows actual Sennett silent movie shorts featuring the actors portrayed on stage, before the performance and at intermission.

As Mabel, Mara Gabrielle exudes the perfect combination of pluck and radiance.’ Gabrielle is the kind of performer who draws your attention whenever she’s onstage. She and Tanner have real chemistry, especially in a scene in Mabel’s train compartment as the company head west to California, and later, singing Also Called Mack & Mabel, as the two imagine their stars rising in Hollywood. Gabrielle is also a powerhouse singer, and wrings the emotion from every note of Time Heals Everything.

Tanner and Gabrielle are supported by a talented and energetic cast. Ken Clement is funny and endearing as silent movie comic Fatty Arbuckle, especially in his Act Two opener, When Mabel Comes in the Room. As Sennett actress Lottie, Kelly Cusimano is a straight-talking, tap-dancing tornado.

Director Michael Leeds deftly switches gears between the comedy, drama and slapstick of Mack and Mabel, weaving all three into a seamless tapestry of entertainment. Kudos to music director Kevin Coughlin and sound designer Wayne Sherman, for making Stage Door’s pre-recorded tracks sound as if an orchestra were in the house.
Mack and Mabel is one of Stage Door’s better musical productions in recent years, a delight from start to finish.