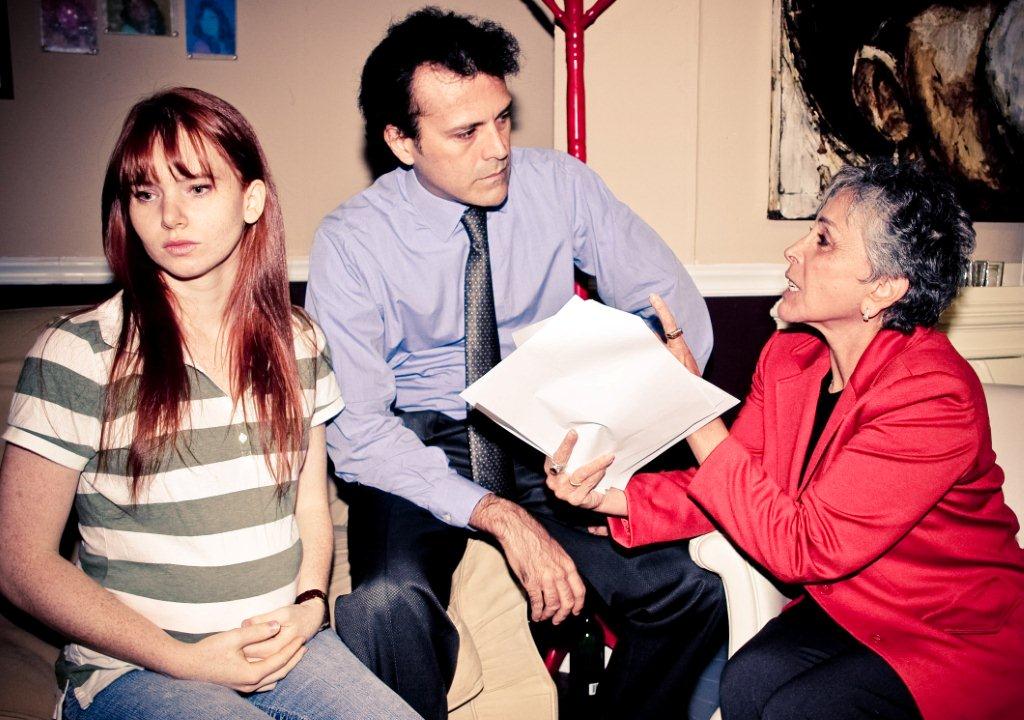 The folks at Infinite Abyss never shy away from edgy, so choosing a play called Mitzi’s Abortion is a natural for the Fort Lauderdale company. But just think of the public relations nightmare in advertising such a title — ads touting “Come see Mitzi’s Abortion…’  Or even the word of mouth:  “We saw Mitzi’s Abortion last night.”  One could see both the humor and discomfort resulting in the title.  Luckily, those two qualities carry over into the Infinite Abyss production that opened .

Mitzi (Shelby Steel) is a 22-year-old fast food worker dating a soon-to-be-deployed soldier, Chuck (Ravi David Smith).  The two barely know each when they discover Mitzi is pregnant.  They marry so Mitzi can benefit from Chuck’s insurance, and Chuck is shipped overseas.  The couple’s reticent joy over their impending life together comes to a halt when Mitzi learns heart-breaking news: the fetus she’s carrying has anencephaly, and will survive only a few days after birth.

Playwright Elizabeth Heffron examines Mitzi’s dilemma from moral, religious, legal and emotional standpoints.  The play’s impact comes from Mitzi’s emotional perspective, which is fed by the other three.

As Mitzi wrestles with the religious and moral ramifications to her predicament, she receives some guidance from Reckless Mary (Phyllis Spear), the ghost of midwife burnt at the stake, and St. Thomas Aquinas (Daivd Tarryn-Grae), reimagined here as a gay gym rat with a thing for Anderson Cooper.

Most of the cast plays double roles in Mitzi’s Abortion. Dominick Daniel delivers strong performances both as Mitzi’s macho dad and her caring doctor.    Monica Mercedes Garcia is wonderfully feisty as Mitzi’s Republican-hating lesbian friend.  Kitt Marsh gives a strong, heartfelt performance as Vera, Mitzi’s mom.  Smith is very effective as Mitzi’s distant soldier husband.  It’s a shame he also gets stuck with the awkward role of The Expert, who appears periodically to give a clinical assessment of Mitzi’s situation.  Blaze Powers is a few notches above recitation as Mitzi’s friend, and she fares even worse as her nurse.

The characters of Reckless Mary and St. Thomas Aquinas are odd choices on the playwright’s part, but Spear and Tarryn-Grae make the most of them.  Spear imbues her scenes with a haunting quality that complements the play’s tone.  Tarryn-Grae is over the top in his solo scenes but does quite well in his scenes where the saint is counseling Mitzi.

The play belongs to Steel, a winsome actress with an angelic face.  Steel gets to play a wide range of emotions during Mitzi’s journey, and manages them all with power and understated grace.  Whether she’s quietly contemplating Mitzi’s sad situation or venting her anger, she’s remarkable to watch.

Mitzi’s Abortion is bound to serve as a well-rounded conversation starter about a controversial issue, but Heffron ultimately takes a safe approach.  Mitzi doesn’t decide to abort a healthy fetus because she doesn’t want it; she decides to follow the advice of her doctor in order to end the suffering of the fetus that is not growing, but dying, inside her. The fact that Mitzi’s insurance refuses to cover any pregnancy termination unless the mother’s life is in danger, forcing a woman to continue to carry a dying baby inside her body, is the real controversy.

Mitzi’s Abortion probably won’t change anyone’s stance on a woman’s right to choose, but this production is worth seeing.