Posted on September 4, 2010 by Bill Hirschman 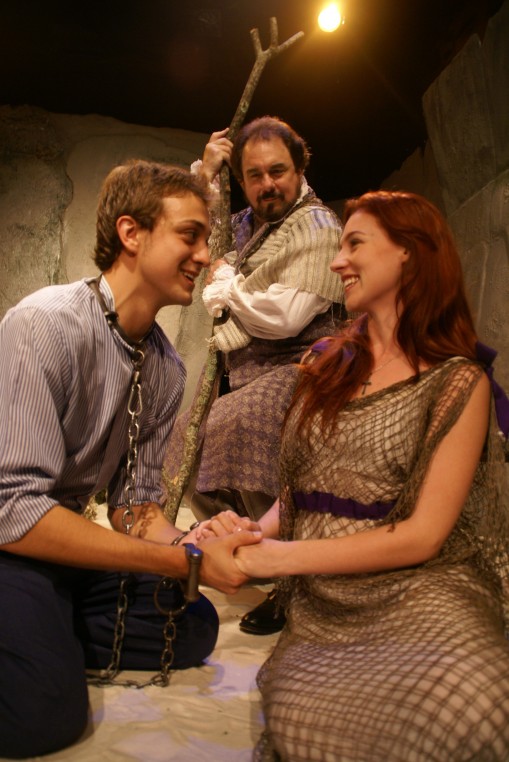 Andrew Wind as Ferdinand with Alexandra Adomaitis as Miranda and Stephen Neal as Prospero (standing) in "The Tempest" at New Theatre. Photo: Eileen Suarez.

One joy of Shakespeare is his sublime language, but mastering the words is only the starting point for any staging. When pressed for rehearsal time, a cast might worry less about conquering the poetry and more about bringing truth to their acting.

This is perfectly illustrated by New Theatre’s decidedly mixed production of The Tempest, which opened Friday night.

Director John Manzelli has worked hard with a cast of dedicated actors, some quite capable, some striving to be so. In fact, the overall production is one of the better Shakespearean efforts locally in several years (to be brutal, there isn’t much competition). But there isn’t any transporting magic or overwhelming passion. The only time the play and the players truly escape the bonds of the text is when Avi Hoffman takes the stage as Stephano, one of the comic shipwrecked sailors.

Some of the fault lies with Stephen Neal’s Prospero. Neal is a formidable actor who has been a standout in New Theatre’s previous Shakespearean outings. He is comfortable with the complex verbiage and his sonorous baritone enunciates the words clearly, although he swallowed the end of some lines in the first act.

But he just doesn’t possess the regal majesty, banked passion and mystical power that Prospero must wield. Without that charismatic fulcrum at its core, The Tempest lacks a compelling force to propel and unify the evening. You should sense Prospero’s presence even when he’s offstage. It’s only late in the play when Neal lets loose the level of anger that might be channeled through magic into raising a storm. This is a problem since a key theme is human beings working through a fury for revenge to reach a peaceful resolution.

Prospero, the usurped duke of Milan more interested in learning magic than governing, has lived 12 years on a deserted island with his teenage daughter Miranda (Alexandra Adomaitis), the magical sprite Ariel (played here as a voodoo spirit by Patrice DeGraff-Arenas) and the treacherous half-human monster Caliban (Robert Strain).

Suddenly, the King of Naples (Hugh Murphy), his handsome son (Andrew Wind) and Prospero’s traitorous brother (Ronald Mangravite) sail nearby with their retinue (played by Kevin Reilley and Rusty Allison) and crew (Sam Sherburne and Hoffman).’ Prospero whips up a tempest with his magic staff and shipwrecks them on his island, the first step in his revenge. But the youngsters fall in love, the drunken sailors plot with Caliban to murder Prospero, and the wizard casts spells to manipulate them all like puppets.

The most intriguing element in the production is Manzelli transporting the tale to a Polynesian/Caribbean isle in the time of Edwardian England when Britain was an unchallenged superpower. Manzelli has persuasively created a credible subtext condemning paternalistic colonization by casting Ariel and Caliban as enslaved Africans native to the island. In that context, many of Prospero’s exchanges with his servants’verbatim from Shakespeare ‘ have an unnerving resonance. For instance, Caliban says, ‘For I am all the subjects that you have, which first was mine own king.’ Among his many inspired touches is Caliban entering in 19th-century slave chains.

Manzelli has labored to help his cast conquer the text, although he only had two and half weeks to do it. But his real success is in the physicality of the production, the sight gags, the staging and the body language. That last is underscored by DeGraff-Arenas, doubling as choreographer, who has Ariel scamper about with stylized Martha Graham movements and making macaw-like screeches. Occasionally, she seems cartoonish, but most of the time it’s an intellectually fascinating and plausible interpretation.

There are some promising performances that may well develop into something more finished by the end of the run: Strain’s aggrieved Caliban, Mangravite’s grave traitor, Murphy subsuming his comic instincts to play the mourning father and Reilley as the weak-willed conspirator.

The actors playing the young lovers are striving, but they’re impersonating characters, not inhabiting them. Every time one of them says something like ‘Alas,’ you’re in for the clich’d impersonation of a callow youth.

On the positive side, New Theatre’s creative staff under Manzelli’s hand produces an evocative environment with very little money. The island setting by Elaine Bryan is a beach surrounded by granite cliffs, Travis Neff’s lighting changes the mood as needed and K. Blair Brown creates quirky ragtag costumes for the castaways, although Miranda seems to have been shopping at the mall on the other side of the island. A special kudo goes to Matt Corey’s atmospheric soundscape ranging from magical swooshes to exotic jungle drums.

Hoffman invests craft and life in every moment of his clownish performance as the besotted sailor, Stephano. Granted, scenery-chewing is not a stretch for this veteran comic actor, but his scenes are the only ones in which the audience loses themselves in the story.

This same role was Hoffman’s only previous Shakespearean foray ‘when he was a student at the University of Miami. And yet, he was more comfortable on the stage Friday than anyone else, more comfortable with the language and the one most able to make a line of iambic pentameter believable.