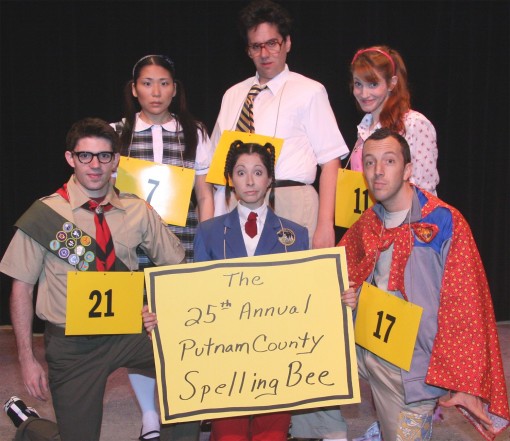 The authors of The 25th Annual Putnam County Spelling Bee know that inside the most self-assured, accomplished adult are hidden the whispers we endured on the cusp of adolescence that insisted we were misfits eternally doomed to be outsiders.

The popular musical comedy that opened Friday at Actors’ Playhouse succeeds because it is rooted in the universally-shared ‘secret:’ puberty sucks.

Spelling Bee is a sweet, wry evening marked by copious chuckles and a few mild tugs at the heartstrings. Director David Arisco, musical director Eric Alsford and choreographer Barbara Flaten deliver a show that sends the audience out with a broad knowing smile.

William Finn’s’idiosyncratic score and Rachel Sheinkin’s PG-13 book depict six nerdy middle schoolers seeking validation by competing for a single slot in the state finals. Although each has a raft of humorous tics, each is suffering through early adolescent woes that most adults can recall (if they dare).

Arisco leads a generally solid classroom of actors, both the contestants whose body language scream how uncomfortable they are in their own skin, and the equally maladjusted adults supervising the bee.

The children include William Barfee (Henry Gainza), the supercilious uber-nerd who traces words on the floor with his foot before answering; Leaf Coneybear (Brian Golub) the exuberant kid in a cape and bicycle helmet who makes his own clothes; Olive Ostrovsky (Gwen Hollander), the woebegone girl whose parents don’t care enough to show up at the bee; Chip Tolentino (Robert Johnston) a Boy Scout whose hormones are out of control;’ Logainne Schwartzandgrubenniere (Julie Kleiner) whose name results from having two gay fathers pressuring her for victory, and Marcy Park (Rebecca Larkin), an overachieving Asian-American parochial school student who rebels against being stereotyped.

Supervising them are Rona Lisa Perretti (Stacy Schwartz), a seemingly cheery realtor whose greatest triumph occurred when she won the bee years earlier; the dour vice principal Douglas Panch (Gary Marachek) who has an undisclosed dark secret, and Mitch Mahoney (Ben Bagby) a dreadlocked, gang-sign flashing parolee working off a community service debt by acting as a comfort counselor to the losers.

While the comedy is broadly satirical, the creators pointedly skewer parental pressure on children and celebrate the joy of finding something that awakens your sense of self-worth. But it’s all done with tongue securely in cheek.

For Arisco and the actors, this material falls solidly in their comfort zone. Marachek has reined himself back in from Fagin last month to give his patented arch top-spin while intoning the meaning of the words and using them in a sentence. Local stalwart Schwartz reminds us what a gorgeous voice she has and subtly communicates that Perretti is repressing the truth that she has failed to accomplish all she dreamed of when she was a contestant. Hollander is winsome and winning. Gainza, with the scene-stealing role, is appropriately over the top although we don’t see the underlying pain that makes Barfee’s defense-mechanism arrogance excusable.

The show’s signature ploy is the nightly drafting of audience members to compete in the bee. Normally, ordinary citizens will be chosen, but opening night’s four victims included Coral Gables Mayor Don Slesnick and TV weather announcer Lissette Gonzalez. This forces the actors playing the adults to be quick-witted in reacting to whatever might come up. Although they have various scripted options, there’s a feeling of improvisation that was well-handled by Marachek. On opening night, one adult had to be pummeled with four increasingly difficult words until he finally stumbled on one that Noah Webster wouldn’t have known.

One of the strengths of Spelling Bee‘s book is that it allows ad-libbing and the latitude to insert local references and topical jibes. As a result, Friday’s show mentioned the proposed change in the Zodiac signs, named a local middle school, and worked in a Cuban-American reference.

At an interval-less 100 minutes, the proceedings drag slightly from time to time. Part of the problem is that Finn’s witty lyrics (which follow no known rhyme scheme) need to be heard clearly for the audience to remain wrapped up in the story. But the sound opening night was often muddy and many of the words were unintelligible.

One non-spelling competition won hands down Friday night. South Florida audiences have a well-deserved reputation for rotten manners, rudeness and flat-out thoughtlessness, but the opening-night crowd at Spelling Bee took home the trophy.

At the one-hour mark, several people got up to exit as if it was a Super Bowl party in their living room and returned in the middle of singers’ big numbers. Several boors (you sitting in rows A, B and C on the left side of the center section and near the front on the left side) shuttled back and forth like a tag team. Bodies continued to poke up like Whack-A-Mole for another half-hour.

Of course, several people wanting to get to their cars (or more likely the free food after the show), stood and left before the curtain call, a South Florida tradition. My favorite outrage occurred when the vice-principal hears a cell phone and looks out admonishingly at the audience — a scripted joke with the phone belonging to one of the young contestants. That was the moment the clueless guy next to me pulled out his Blackberry and began deleting e-mails like a ten-year-old with ADD.

Folks, if you don’t want to be there, stay home.