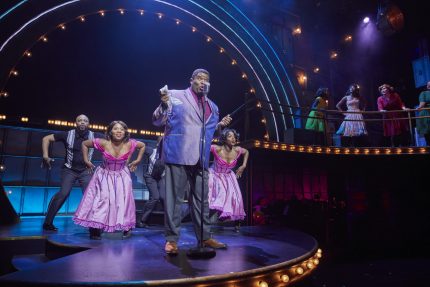 Yes, there are five stunning actors in this world premiere musical A Wonderful World, breath-taking choreography and visuals, and the compelling fulcrum, the life of jazz legend Louis Armstrong as he navigates a racist world and his own considerable fallibilities.

But it’s the decades-old brass-fueled music, reinvigorated more fresh and alive than on any CD or mp3, pulsating through a half-dozen genres in celebratory revels and soul-scorching ballads that drive this achievement emerging from the pandemic at Miami New Drama.

And yes, that feat is due to the musical talent and skill of the performers, of course, notably Juson Williams carrying the title role, and no less, the four women who act as our narrators escorting us through phases of his life from a street kid in New Orleans’ Storyville to making his name in Chicago to his international success and eventual death in New York.

And there is the unifying vision of Christopher Renshaw, a British director who has lived in Miami for 13 years and who helmed a Tony-winning The King and I in 1996, as well as Broadway’s Boy George musical Taboo.

But the inarguable triumph of this production is the way husband and wife Annastasia Victory and Michael O. Mitchell have molded about 35 Armstrong-associated numbers – hits and rarities – into the propulsive facet of the evening. Their genius is that they rearranged and reconceived familiar numbers so imaginatively that we hear the lyrics, intricacies and vitality of the music as if for the first time.

Their versatility encompasses Dixieland, swing, scat, big band jazz and they provide movie-like underscoring to a majority of the lengthy show.

Know that this is absolutely not a revue. Playwright Aurin Squire has written a classic Broadway-style bio-musical like Fiorello or Barnum. As with George M, the numbers are aligned with the developments in Armstrong’s life, some allied to the correct time being represented, some inserted out of time simply because they say in music what needs to be established.

For instance, “Avalon,” written in 1921 but not recorded by Armstrong until 1960, fits perfectly with Armstrong discovering a way to develop Dixieland into a new sound while on Southern riverboats.

Obviously, a key in this show’s ultimate success is Williams – an experienced musical theater performer who also leads a New York choir. Wisely, Williams doesn’t try to deliver a nightclub impressionist’s Armstrong; that would be fatal to any audience member who has seen the inimitable and iconic Armstrong in person, on television or film. In fact, Williams fingers his trumpet, but a genuine pair of trumpet players appear in spotlights actually playing a horn.

But Williams has an innate charisma and likeability of his own, although it echoes that indefinable quality that attracted Armstrong’s fans. But in addition to having Armstrong’s generous physique, Williams also has found through extensive video research those Armstrong’s lips that twist into beaming smiles and mournful frowns, the small eyes blazing wide with joy and pain. He starts off with the young Armstrong’s “normal” voice that later turns into the trademark gravel. More importantly, he credibly portrays the legend’s development over time, and his being in thrall to multiple vices ranging from women to liquor to women to marijuana to women.

And even more crucially thanks to Squire, he becomes a witness we accompany as he traverses the manifestations of evolving race relations from a lynching to backlash from civil rights activists who see him as an Uncle Tom and are unaware of his pushback through his career.

It’s in the latter moment that Williams makes the most of what Squire and the musical directors give him in a mournful “Black and Blue.”

Indeed, one of the highlights of the show is when he gets out of jail in Memphis for allegedly having a white woman on his tour bus by singing a double-edged rouser at a police benefit concert with the release line, “I’ll Be Glad When You’re Dead, You Rascal You.”

Renshaw and company have put together a large cast of local and tri-state actors clearly savoring the material – and the chance to finally get it on front of an audience.

Darlene Hope, a New York actor from Homestead, is Lucille Wilson, the final woman in his life struggling to deal with his spiraling health and persistent adultery. Her rendition of “That’s My Home,” when Lucille discovers Louis’ latest dalliance, is heart-rending.

Allison Semmes as Lil Hardin, who educated and refined the “hick” Armstrong in Chicago, is the epitome of sophistication and intelligence.

Dori Waymer appeared opening weekend for ailing Christine Sajous as the bawdy self-described “violent hooker” Daisy Parker offered here as the woman who was the first to propel Armstrong to perform. Waymer was so simply smooth and flawless that without the warning in the playbill, no one could have guessed she was an understudy. She almost licks her lips as Squire has her describe her relationship: “Our love was razor blades and soaked sheets…. like drinking dark liquor out of an ugly cup. And our cup runneth over with rutting, cussing, and cutting.”

And first among equals is Nicole Henry as Alpha Smith. A Miami native who has built a cabaret career around the country, Henry nearly overwhelmed the proceedings every time she unleashed her vocal cords such as in “Big Butter and Egg Man.”

All four invest expressive phrasing in their numbers, such as when Waymer and Semmes, being displaced by Henry, sing a scornful duet of “After You’re Gone” and later a wryly competitive “Mack the Knife.”

Renshaw’s smooth pacing kept the lengthy narrative moving most of the time. But his most notable achievement is turning the usual “and-then-I-wrote” by the numbers bio-musical into moving drama by insisting that his cast dig deep into their souls to deliver the raw emotions whether in song or speech.

Probably just as responsible for the show winning over the audience is Rickey Tripp’s infectious kinetic musical staging and choreography that turns movement into music, or visa versa. His explosive numbers involve a range of styles covering half a century.

Squire, an accomplished playwright who also writes for television, co-wrote Miami New Drama’s Confessions of a Cocaine Cowboy and one of the Seven Deadly Sins plays. Outside of a children’s piece, he does not appear to have much experience in the rarefied and challenging field of book musicals. This genre is far more difficult to master than most writers realize, but Squire acquits himself relatively well.

On one hand, he fails to avoid the curse inherent in bio-musicals: scattering the narrative with necessary biographical exposition that obviously clang amid more naturalistic vignettes.

But if Squire has to check off parts of Armstrong’s life from a list, he pens masterfully lyrical passages such as Daisy recalling, “And just like that he cracked music wide open on a riverboat. No ego, no rooster strutting pride, no need to write his name on it. You see the sun doesn’t feel the need to autograph the flowers or write its name on top of the trees. It just shines and lets everything grow around it.”

Squire has faithfully and accurately captured a difficult protagonist who has been featured before in Terry Teachout’s Satchmo play (at Palm Beach Dramaworks and off-Broadway) as the elderly man recalling his past and a TV movie starring Ben Vereen in Louis Armstrong- Chicago Style. He doesn’t shy away from frequent F-bombs or liberal infusions of sex (such as multiple couplings behind a sheet while the chorus sings “Makin’ Whoopee”.) Given the spiraling trajectory of his final years, Squire and Renshaw deserve props for being true to the story but ending with a dramatically justified upbeat musical theater finale.

The visuals of the work are literally first-class, no asterisks, no well-yes-for-a-local-production hems and haws. Adam Koch’s evocative scenery incorporates balconies and platforms against floor-to-ceiling walls of old travel trunks, and incorporates Steven Royal’s copious projections of stationary and cinematic collages (There is a wall of classic Armstrong record albums with Williams’ photoshopped in). All of it is enhanced by Cory Pattak’s lighting design that establishes mood plus a score of times and place. Kai Harada’s sound – crucial to making the brass score bright and clear – was textbook perfect. And Ari Fulton’s costumes – there must have been a couple of hundred — captured every change of period with rags, spangles, showgirl tights, tuxes with tails, elegant gowns, head scarfs and an array of hats in a rainbow of color.

Save a special bow for Jason Holley as Lincoln Perry, better known as the stereotype movie character Stepin Fetchit, portrayed here in his real life as a well-heeled sophisticated entertainer who crucially advises the young Armstrong.

Squire gives him a tough pragmatism to relate, obscenity-laced but with a calm acceptance of reality:
PERRY: Lou, you see, people is white. Coloreds is folks. And we are cats. Now Lou, are folks paying your bills?
ARMSTRONG No.
PERRY: Well then fuck’em. They ain’t keeping your lights on. If they ain’t putting gas in our Caddy, they ain’t have a right to say shit. Fuck them folks. That’s what you gotta do. Please the people and fuck the folks…. White people love that shit. They don’t know we lying to them when we do it. They think they seeing some sincere Mammy plantation shit. And if they can smear their face with shoe polish and earn a killing playing us, then why can’t we?

Holley illustrates the philosophy with a machine gun tap dance to a sardonic “When You’re Smiling” (with Williams joining in on occasion) that damn near stops the show.

Responsible for delivering that eclectic score with the energy and power of a trumpet is the band led by conductor and keyboardist Elijah Gee with Jean Caze and Luvens Lubin on trumpet, Roy Fantel on drums, Ranses Colon on Bass, Diron Holloway on woodwinds, Derrick Harris on trombone, Brian Russell on guitar and banjo – all coordinated by Caryl Fantel.

Miami New Drama, which prides itself on sponsoring new work and reaching out to Miami’s diverse audience, has gambled bravely on this work which cost about $1.5 million to bring to previews just to be shut down before opening night by the pandemic. Much of that initial cost was underwritten by Miami businessman Thomas Rodgers Jr., who then agreed to pay for part of the cost of remounting the current production.

Again, this is even more of a classic Broadway bio-musical than, say, Evita or Hamilton. Some people are not going to buy in to the style, although some people don’t buy in to Shakespeare, Sondheim or Neil Simon either.

But most people involved coyly make side references to the hope that this musical will have a longer life somewhere, virtually whispering the word “Broadway.”  It won’t be the first time such talk has accompanied premieres in South Florida with varied success. It’s already one of the most expensive shows to bow locally and it will have to add another zero to the budget if it goes to New York.

This time, I wouldn’t bet against it.

To read a story about the journey of the making of the musical, click here. 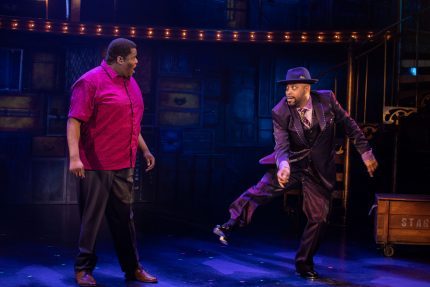