Report From New York: Durang’s Satire Vanya and Sonia and Masha and Spike Is Funny and Cutting and Silly and Superb 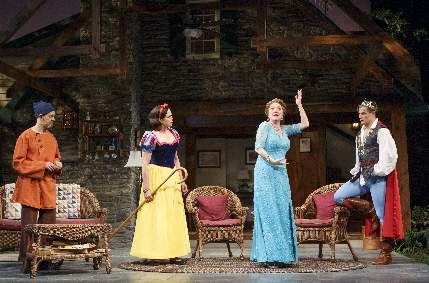 We’re back from our semi-annual trip to New York to scout out productions you might want to see (or not), shows that might  tour South Florida and scripts that might be worth reviving in our regional theaters. This trip is a little unusual for its timing regarding Tony nominations, so we may not see some of the blockbusters until the fall. See the list of previously reviewed shows at the bottom of the story. Other reviews are coming of The Dance of Death, Ann and The Big Knife.

There are few cultural pleasures as a satisfying as watching virtuosos executing their art with precision and fine-grained skill. It’s even better when what they’re producing is hysterically funny.

So among the fine, entertaining evenings and afternoons in theater this trip, the highlight hands down was watching a brilliant cast under Nicholas Martin’s direction make Christopher Durang’s wacky Vanya and Sonia and Masha and Spike into such a hilarious yet incisive satire on the 21st Century.

The Tony Award committee rightfully nominated it as best play, outstanding director, with nods to David Hyde Pierce, Kristine Nielsen, Billy Magnussen and Shelita Grant, inexplicably snubbing Sigourney Weaver. Sadly, the competition is so stiff that it’s unlikely any will take home any of the awards; Vanya suffers from the Tony comedy curse faced with three new dramas and four acclaimed revivals for the other categories.

It’s slated to close June 30, so if you’re headed up north, get tickets now. Local companies might want to consider mounting it. But Durang’s script requires a top-drawer director and cast to juice up the raw material with sly line readings, nuanced characterizations and calibrated physical/visual comedy.

A bizarre but illustrative tableau occurs when Nielsen dressed as Maggie Smith in California Suite and Weaver garbed as Disney’s Snow White are sobbing loudly about their empty lives to win the attention of their brother Hyde Pierce dressed as one of the seven dwarves. Hyde Pierce’s woebegone look of being inextricably and insolubly caught between two demanding vanities is worth the whole evening.

In a modern riff on Three Sisters and the entire Chekov canon, Durang posits a sextet of offbeat characters stirred together at a family gathering at the landed gentry’s farmhouse in Bucks County, Pennsylvania. The central players are a trio of late 50-something siblings whose parents named them after Chekov characters. Vanya (Hyde Pierce) and Sonia (Nielsen) are a pair of gentle, harmless, even endearing souls who have done almost nothing with their lives but putter about and care for their invalid parents who just died after suffering dementia.

Sonia is a highly introverted woman who has never been married, in fact has barely left the farm. Vanya is a gay dilettante who has written an arty play. Masha (Weaver), a globe-trotting film star whose career is sagging, storms in like an imperious whirlwind with her latest boy toy in tow, the actor wannabe Spike (Magnussen) who is as handsomely buff as he is dim, shallow and blithely ignorant of anything that occurred before last week in terms of culture, history or anything else.

Vanya and Sonia’s only allies are their sassy housekeeper Cassandra (Grant) who claims to see the future, and their neighbor Nina, also an aspiring actress (We saw understudy Liesl Allen Yeager who was fine enough to make us not miss Genvieve Angelson).

The plot hinges on Masha planning to sell the lifelong homestead (and its cherry orchard) from under her siblings, throwing these naifs out in a cold world they are singularly unequipped to handle. At some point, the title characters dress up for a costume party down the road (there is some method to Durang’s madness) but the event changes everyone.

The play falls solidly in Durang’s unique groove displayed locally in 2009 at Mosaic Theatre’s production of Why Torture Is Wrong, and the People Who Love Them (Barbara Bradshaw who led that romp would be perfect for the much different Sonia). But like Chekov, Durang has a quiet pungent compassion for all four principle characters who are pitifully disconnected from the real world most of us struggle to live in. A familiarity with Chekov’s works is not required but does give an extra bit of spin to many of the jokes.

While he never stops being comical, Durang slides in some serious social commentary. The buttoned-down Vanya erupts in an extended aria of fury, scolding the witless Spike who scornfully giggles when Vanya referred to licking stamps when “everyone knows” you just pull them off a sticky sheet. Anyone over 50 will cheer Vanya’s scorching tirade about how the Millennial and Gen X generations have heedlessly jettisoned as irrelevant everything that has come before them. Ironically, and never said, the young Boomers rejected their own parents’ values. But, at least, that involved genuine if debatable conviction as opposed to an unconcerned self-centeredness. To hear Vanya lament the loss of a shared binding culture in favor of fractured hand-tailored segregating silos is to hear your own fears spoken aloud. Minor spoiler alert: The fact that the supremely selfish Masha comes around by the finale, only underscores how the succeeding generations differ from the Boomers.

If the script does seem to need a bit of trimming – Spike would say “We get it, already” — Martin delivers this duality of wacky satire and underlying morals with an assured hand.  He also created an environment in the rehearsal room akin to a laboratory because the show is soaked in bits of business, especially a physicality that ranges from Vanya’s slow burns to Cassandra’s silly strut to Spike’s proudly rippling his abdominal muscles like a belly dancer. Martin keeps Vanya’s harangue from becoming preachy by allowing Hyde Pierce to flail his limbs comically as if they were as out of control as his emotions.

Hyde Pierce relies heavily on his bag of tricks refined in Spamalot, La Bete, Curtains and Frasier, especially the doleful puppy dog looks. But that’s like complaining that Maria Callas relies on an E above high C or there goes Barishnikov again doing that triple grand jete. His comic timing would shame a Swiss watchmaker, but it’s his body language that deftly emphasizes or belies his dialogue. His tour de force is that aria and Pierce’s voice seemingly turns so ragged that you wonder how it lasts two-show days.

Weaver long ago earned a reputation for comedy, especially in the weird works of her college buddy Durang. But most people know her from dramatic roles in film or a few straight roles in plays like Hurlyburly. Only in her villainess in Working Girl has the general public had as hint of the full-out way she can inhabit a comic monster sacré. Few actors of her stature would so completely immerse herself in a character so unapologetically self-involved that she sees it as a virtue and a God given right. And somehow when she is faced with behavior even more self-centered, her eventual conversion is as credible as an intentionally cartoonish epiphany can be.

Nielsen starts out as a hapless wide-eyed woman but who finds a bit of backbone and hope. But she has two scenes that explain her Tony nomination. One is Sonia replaying the Maggie Smith imitation that she did at the party, which is not only dead-on, but a reflection of her blossoming pushback. This coalesces in her lovely telephone scene in which she fields the first dinner invitation from a beau in a half-century.

It’s just another example of the kind of fine work you can only see in theater.

Vanya and Sonia and Masha and Spike plays at the Golden Theatre through June 30.

One Response to Report From New York: Durang’s Satire Vanya and Sonia and Masha and Spike Is Funny and Cutting and Silly and Superb