Report From New York: Oslo Peeks Behind The Scenes Of Diplomacy And Politics 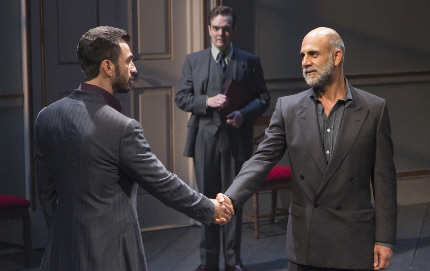 We’re back from our trip to New York to scout out productions you might want to see (or not), shows that might tour South Florida and scripts that might be worth reviving in our regional theaters.  Other shows—all nominated for Tony Awards on June 11 – that we have reviewed recently or will review in the next few weeks are War Paint, Bandstand, Indecent, Groundhog Day, The Play That Goes Wrong, Six Degree of Separation and Natasha, Pierre and the Great Comet of 1812. Just search for “Report From New York.”

In this dispiriting time of eroding international relations, the incisive play Oslo is both hearteningly optimistic and existentially pessimistic about human beings’ ability to negotiate and compromise past their differences to accords that improve life as we know it.

The rifts in our Congress cannot compare to the abyss separating Israel and the Palestine Liberation Organization in 1993 when neither side would even consider talking to each other, let alone discuss non-starters like a Palestinian homeland.

J.T. Rogers’ play at Lincoln Center, nominated for several Tony Awards including best play, tracks the miraculous, tumultuous and intensely dramatic journey in which Norwegian officials brought representatives to back-channel negotiations. It ended with the seemingly impossible outcome of Israel giving land to the PLO – and conferring implied recognition as a legitimate entity.

The elation for the audience is seeing the ultimate success of the talks as validation of Mankind’s highest virtue – the primacy of reason. The horrible irony, of course, is that the good will of the settlement did not survive the ensuing years.

Rogers and company invest considerable humor about fragile and soaring egos, self-destructive  politics and well-intentioned blunders into this tale of how your sausage is made – in this case, iconified by the well-publicized announcement of an agreement in the Rose Garden. But that moment of Yitzhak Rabin and Yasser Arafat shaking hands began differently.

A Norwegian couple, Mona Juul, a mid-level bureaucrat in the Foreign Ministry, and her husband, Terje Rod-Larsen, the wonky administrator of a think tank, stumble into an opportunity to bring together the warring parties. They are well out of their depth in this profoundly unauthorized effort, but they succeed over time in setting up a quiet meeting on the outskirts of the titular city. While land and politics are the topics of discussion, clearly the key unspoken issues are security and dignity.

As hard as it is to get negotiators to the table, it takes even more diplomacy on the part of the Norwegians to keep them there with rounds of toasts, jokes and meals featuring special waffles. The approach of both the Norwegians and Rogers is to treat these diplomats as fallible but likable creatures and to underscore their universal humanity.

Obviously, ingrained emotions are the primary obstacles. Mona rails to the parties, “Stop it. Stop it. We don’t have time. Listen to me. You have fought each other—killed each other—for fifty years. Your mothers and daughters and sons have died, and nothing has changed. The world has washed its hands of this conflict, because they do not believe you can change. No one else is coming to help you. So it is up to you. Stay in this room and find a way forward.”

Mona narrates the story so that audiences willing to pay attention know who is who, what is what and where we are at any point in the glove-trotting narrative. The couple plays hosts, enablers, confidants and peacemakers to delegates who squabble, imbibe, dance, yell, chow down, perambulate, confide, bluster and circle each other warily.

To ensure the audience does not get lost in the Gordian Knots-level issues, Rogers’ script and the production directed by Bartlett Sher move not so much slowly so much as deliberately over three hours and three acts. But they unobtrusively earn the audience’s investment in the characters and their pursuit of a settlement. So as the process lurches unsteadily with failure imminent at every mercurial moment, patrons realize that they have been caring deeply for some time how this tense and fragile course will end.

Granted, like so many before him, Rogers’ extensive research subconsciously drives him to add in more details than necessary, perhaps because he actually met some of the participants. Therefore, 10 minutes likely could be sweated out without harming anything. Even so, he has taken dramatic license with some inventions and compressions.

The New York production benefits from the Mitzi Newhouse’s huge oval stage for the characters to roam and a first-rate cast including marquee names Jefferson Mays and Jennifer Ehly as the Norwegians who risk their careers on this initially unauthorized expedition, and the performances Anthony Azizi as the skeptical PLO finance minister versus Michael Aronov as the ebullient outsized Israeli cabinet member. Sher, Ehly,  Aronov, Mays, the play itself, plus the lighting and set designer all have Tony nominations.

Oslo is too cerebral in its advertisable premise to get a national tour in a market that prefers The Little Mermaid. But some South Florida company will mount this work in the near future despite the long running time and a cast of 12. New Theatre had successes with Rogers’ Madagascar in 2005 and White People in 2004.

While this effort did not result in the lasting peace that many hoped for, it would be a first step. Rogers’ play seems to be a theatrical hand extended to everyone with the hope for human beings ability to solve problems with words rather than weapons.

Larsen says straight to the audience at the end, “My friends, do not look at where we are; look behind you. See how far we have come! If we have come this far, through blood, through fear—hatred—how much further can we yet go? There! On the horizon. The Possibility. Do you see it? Do you? Good.”