In New City Players’ Proof, The Numbers Don’t Quite Add Up 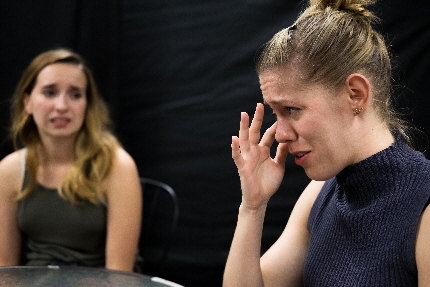 Proof, David Auburn’s drum-tight drama of math and madness, has proven to be one of the most durable Pulitzer Prize winners of the Aughts. For budget-conscious companies, it’s eminently producible—four actors, one set! It’s also a safe, accessible choice for a politically agnostic theatre, while offering just enough intellectual richness for those with a head for numbers.

Which is to say it’s an ideal selection for a newly professional company seeking to identify its brand through black-box productions of acclaimed classic and contemporary plays. New City Players, a three-year-old company whose 2017 season is its fullest to date, seems to have struck a chord with Proof, selling out its opening weekend at Empire Stage.

And while the audience responded with a generous standing ovation last Saturday, the production’s wobbly foundations are unlikely to impress seasoned theatergoers, especially those who have seen the play before. From questionable acting choices to frantically paced direction, this Proof only conveys the broad strokes in Auburn’s filial drama.

At its emotional core, Proof is a story of guilt and redemption, transcendence and acceptance. We first meet Catherine (Krystal Millie Valdes), sloppily dressed and in the throes of depression, in the earliest hours of her 25th birthday. She’s resting in a daze on the back porch of her family home in Chicago, and is soon stirred awake by her father, Robert (Jeffrey Bruce), bearing celebratory champagne. They discuss birthday plans, Catherine’s rudderlessness, and, naturally, mathematics: Robert is a world-renowned mathematician who, we soon learn, peaked in his 20s and subsequently suffered a mental breakdown.

It’s a plausible conversation for an exacting father and, in his eyes, wayward daughter to engage in, except for the niggling fact that Robert is newly dead. Catherine has been communing with a hallucination, a potential sign that she may have adopted her father’s instability.

No sooner do we process this information than Catherine is visited again, this time by a flesh-and-blood mathematician named Hal (Johnny Contini), a former grad student of Robert’s, who has been rummaging through the endless detritus of her father’s study for flashes of buried genius.

An affable math nerd who idolized Robert, Hal is hoping against hope that despite Robert’s years of incoherent scribbles—in the vividly written backstory, we learn that Robert amassed a mountain of library books, believing that extraterrestrials were communicating with him through the Dewey Decimal System—something of value will emerge from the gibberish.

He eventually finds it, thanks to a gift from a romantically smitten Catherine, though its apparent provenance isn’t what he expected.

Proof is both universally respected and decidedly unflashy, with mysteries and revelations that tumble out of cryptic notebooks and layered flashbacks with the unimpeachable logic of a peer-reviewed algebraic equation. But the dynamism of the source material is largely absent from a cast that buckles under the play’s emotional demands.

Valdes overplays Catherine to the point of hysterics from the get-go, prone to conversing in such piercing, histrionic screams that it’s difficult to buy Hal’s attraction to her. If this lurching performance is supposed to tease her character’s accelerating crackup, it’s a poor representation of it: Sheer volume does not make a madwoman and, more to the point, this tendency carries over even in Catherine’s healthier scenes.

Bruce, by contrast, suffers from the opposite issue. His Robert is genial and static, lacking the gravitas of his station, and playing in a leisurely register even when his character is caught in the throes of a manic episode. Erica Rose Dade, as Catherine’s more put-together sister Claire, captures her character’s well-meaning but needling manner, and Contini embodies Hal’s formerly retiring nature and emerging confidence. But both are prone to stiffness suggesting material with which they’re not fully comfortable—and onstage chemistry, so vital in such an intimate show, is nil.

It doesn’t help that director Timothy Mark Davis paces the show like a race to the finish line, with the actors occasionally stepping on each other’s lines, and frequently anticipating actions rather than reacting to them in the moment.

The play’s strongest asset is also its most economical one. Lacking the resources in the tiny Empire Stage space to create a realistic back-porch setting—a la Palm Beach Dramaworks’ production, in 2012—scenic designer Ryan Maloney achieves the ambience with simple chairs and side tables supplemented by a backdrop of walls overflowing with rambling, obtuse equations punctuated by spray-painted, dripping spheres. Marrying street art and academia, the designs visualize the torrent of algebraic doodles that might exist in Robert’s notebooks.

It’s a bright spot in an otherwise grasping rendition of an elegant play, one that will be best appreciated by newcomers to the material. 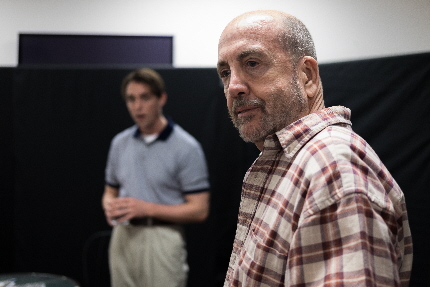