Report From New York: Peter And The Starcatcher Is Profligately Imaginative Tale 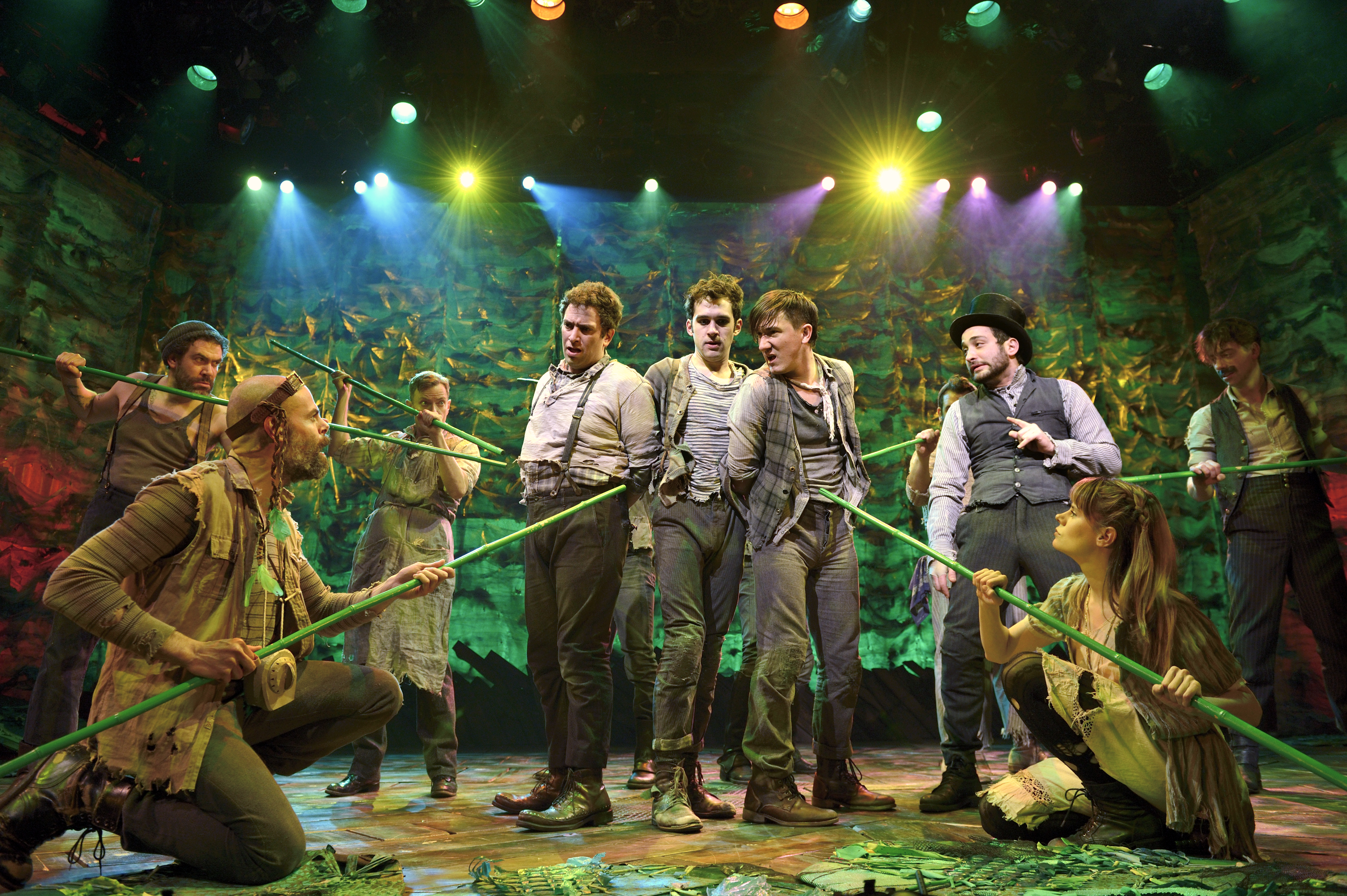 The Lost Boys and the natives in Peter and the Starcatcher / Photo courtesy of O&M Inc.

Welcome to our semi-annual scouting trip for shows likely to appear in South Florida in a local production or national tour — or shows you should make a point of seeing/avoiding on your next trip. Among them:  Leap of Faith (starring Miami’s Raul Esparza, just closed), Other Desert Cities (announced for Actors Playhouse next season), Peter and the Starcatcher (based on books by Dave Barry and Ridley Pearson), Once, Nice Work If You Can Get It, The Columnist, End of the Rainbow, Venus in Fur and a revival of A Streetcar Named Desire (recently-extended with an African-American cast). See links at the bottom of each story for previous reviews in the series.

Today’s Review: Peter and the Starcatcher

Crammed with scores upon scores of visual and aural tricks of the trade, Peter and the Starcatcher may have a few flaws, but it’s the kind of spectacle that should not be missed for those who enjoy luxuriating in the unleashed imagination of stage professionals.

Based loosely on the series of children’s books by humor columnist Dave Barry and thriller writer Ridley Pearson (an unexpected duo), Starcatcher indeed delivers a quirky spin on the Peter Pan origin story. But while children may enjoy this, this play with music is meant as a campfire/bedtime story for adults.

The premise is that a ragtag group of adult travelling players, likely transported here from Victorian England, gather like the troupe of narrators from the Royal Shakespeare Company’s Nicholas Nickleby. Using makeshift props and costumes, this gaggle of 12 scruffy actors play what likely totes up to a half-a-hundred roles with a cheeky disrespect for naturalism and the fourth wall.

Much of the fun is discovering how the authors guide us from an initial set up that seems to have little connection to James M. Barrie’s story and yet ends up very close to the elements of the original tale. It reminds you, in that sense, of Steven Spielberg’s Young Sherlock Holmes. But thanks to Barry and Pearson, Starcatcher has its own inventive mythology woven in.

The seemingly anarchic script by Rick Elice (a co-writer of the impressive Jersey Boys and the less impressive The Addams Family) is ingenious while sublimely silly, awash in childish puns. Elice’s story is influenced more by Lewis Carroll whimsy and Firesign Theater insanity as much as Barrie’s precious fey fantasy. He doesn’t even pass up anachronisms such as one character asking, as in the wireless commercial, “Can you hear me now?”

But the key asset is the vision of co-directors Alex Timbers and Roger Rees (Elice’s partner and the aforementioned portrayer of Nicholas Nickleby) and movement designer Steven Hoggett whose singular work elevated the musical Once this season, American Idiot a few seasons ago and was absolutely brilliant in the Scottish import Black Watch. Together with set designer Donyale Werle and costumer Paloma H. Young, the directors enlist cargo nets, ladders, ropes and jerry-rigged props from whatever flotsam is at hand to create fantastical environment. At one point, a little yellow bird darting about is created from a rubber dishwashing glove shaken vigorously over the shoulder of a performer.

The production is far from perfect. The handful of songs by Wayne Barker seems superfluous except to enhance the English music hall/ Christmas pantomime credentials feel of the piece.

And then there’s the pacing. Although the show feels like it runs a little long, it all races by in an unrelenting blur. It is frustrating to see tasty treats flying by with no time to savor anything. It makes the vaudevillian hurlyburly of The 39 Steps seem downright pokey.

This compounds a crucial problem if you don’t know Barrie’s source material as opposed to the Disney versions. The narrators dump truckloads of exposition at such a rapid fire pace in the first 20 minutes that you either pay an inordinate amount of attention trying to follow it, or just throw up your hands and let the tide wash over you without trying to comprehend it.

The cast is made up of chameleons escaped from a terrarium. Adam Chanler-Berat is the callow reluctant hero of the first half of the title, and Celia Keenan-Bolger is the spunky child-woman who provides the second half of the title. Christian Borle (TV’s Smash, Legally Blonde, Spamalot) has been justifiably getting much of the ink for his Tony-nominated turn as Black Stache, the pirate king. With his bulbous nose, round eyes and swash-when-he-could-be-buckling elan, Borle is a delight from his heroic stances to the Groucho Marx moustache painted under this nose.

Theoretically, there is nothing to keep a Florida company from trying to mount this show. But at the risk of insulting folks down here, this collection of artists has freed their imaginations in stylistic staging to a degree that few local companies are accustomed to, other than Mad Cat and Naked Stage.