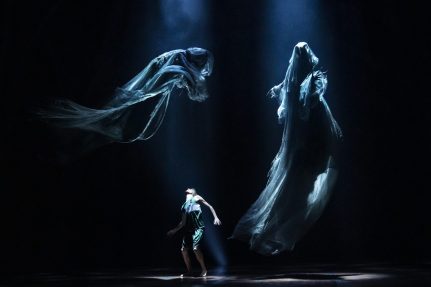 In  the theatrical world of Broadway when the tired complaint persists about chandeliers and helicopters replacing character and drama, the revamped Harry Potter and the Cursed Child isn’t going to please those folks much.

But you simply have to admit that while the script is just adequate and the acting is workmanlike, good grief, the stagecraft and the choreographed staging are breath-taking.

Yes, you can complain the merging of a two-play event, which clocked in at five when it bowed in 2016, now is a single performance of about 3 1/2 hours – longer both in minutes and seeming hours than August: Osage County.

Yes, it’s sometimes hard to understand the dialogue through the faux British accents. Yes, it will help immeasurably if you know the Potter saga ahead of time because this tale, which picks up 19 years later, regularly riffs off of and narratively relies on knowledge of what has come before.

But Director John Tiffany, Movement Director Steven Hoggett (both responsible for the brilliant Black Watch) and Illusionist Jamie Harrison have melded an encyclopedia of visual storytelling into the tale, not simply on display for its own sake. These aren’t “special effects;” these are imaginative uses of – and inventions of – theater as spectacle.

It begins with Christine Jones’ simple but evocative sets that fly in and out as the story catapults headlong at Mach 3 without more than a few moments rest. But then people tumble in mid-air, thunderbolts cross the stage, and, small spoiler alert, the first act terrifyingly ends with dementors dropping down from overhead in search of fresh victims among us in the audience. (All kidding aside, I’m not sure I’d bring a really young child to this one unless you want to deal with the nightmares).

I was a magician entertaining at parties when I was a teenager and I have followed the evolution of the profession from afar ever since. So, I can tell you how this production achieves about two-thirds of the deftly-executed visual effects, but there are scores that I couldn’t begin to dope out, starting with how the entire scene shimmers and vibrates when the time turner is used. Perhaps there really is magic.

Designers have obviously had to work overtime: from Katrina Lindsay’s multitude of character-infused costumes for a huge company of actors to the Regency wallpaper on the auditorium walls. Neil Austin’s precise lighting not only makes some of the illusions possible but also helps Tiffany’s switch scenes from place to place in the flick of a switch. The stage managers must be putting in for overtime.

The convoluted plot by Tiffany, Jack Thorne and J.K. Rowling won’t get confused with Miller or O’Neill although it does have to do with misfit teens trying to find themselves, the pains of parenting, and a classic generation gap between Harry Potter, now Head of the Department of Magical Law Enforcement, and his son, Albus Severus Potter. And there’s a strong hint of two characters being in the early stage of a gay relationship.

An intentionally color-blind cast is fully invested in the goings on, but special honor goes to a huge ensemble of regulars and swings – arguably the hardest working people in show business — who likely interchange daily in a score of “tracks.”

It’s all mildly intriguing but it felt like the narrative came to a close — or could have – three different times. I can’t imagine what the five-hour journey must have been like before it was pruned for the post-Covid reopening.

If you are a Potter fan – which describes 68 percent of the sentient public worldwide including this critic – you’ll be glad you invested the time and three-digit ticket price. If not, it’s still a memorable piece of visual theater at the Lyric Theatre that you will not see anywhere else given that the logistics make it impossible to mount other than a national company sitting down in one metropolitan city like San Francisco for an open-ended run.

Harry Potter and the Cursed Child in an open-ended run at the Lyric theatre. Tickets: https://broadway.harrypottertheplay.com/ticket-information/