Respect Is A Musical Revue That Actually Deserves Respect 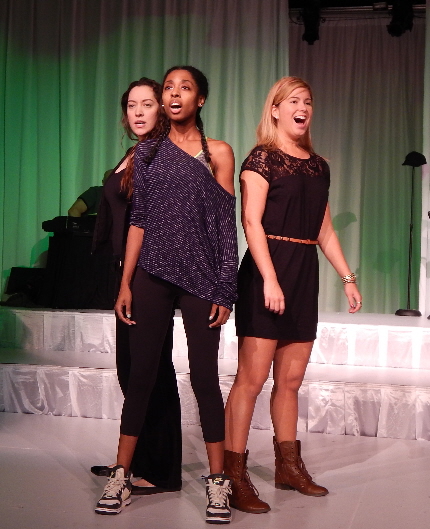 A rehearsal shot of Carla Bordonada, Ziarra Washington and Nicole Kinzel belting out a tune of empowerment in Boca Raton Theatre Guild’s Respect, A Musical Journey of Women / Photo by Carol Kassie

So, here’s a happy surprise: The revival of the empowerment musical Respect, A Musical Journey of Women at Boca Raton Theatre Guild is so superior to most of the ubiquitous second-rate revues that your discernment may need a double-take to make sure this show is really being done this well.

Four powerhouse singers deliver 60-plus pop songs from the past hundred years inserted in a travelogue about the evolution of women in American society, each song (or half-chorus of a song) illustrating or gently lampooning each stage of that arc.

Carla Bordonada, Nicole Kinzel, Sharyn Peoples and Ziarra Washington (led by musical director and arranger Phil Hinton) weave superb voices with beaming smiles, winning personalities and a clear joy over what they’re doing. It’s inescapably infectious to an audience of Boomers and their daughters who frequently clap and sing along. In solos, duets, trios and quartets, many with tight harmonies, these performers are more than worth the trip, regardless of your gender.

To be sure, the book – and there is a script — is a mélange of every cliché and meme related like a newly-discovered revelation: Did you know women were once considered second-class citizens whom men wanted to keep barefoot and pregnant? Really. It’s true.

Besides the performances, the show is elevated above a simple songbook of thematically linked songs by how ingeniously they are interwoven.  Especially as the show moves forward in time, complex and diverse attitudes bump up against each other in medleys such as “Where Is The Love” broken up by “I’m Gonna Make You Love Me,” “Bewitched, Bothered And Bewildered” and “My Man.”

The only downside is that in most cases, only a couple dozen songs get an airing from beginning to end; many songs are lucky to get eight bars before the show moves on to another number as if they are illustrations in a textbook. But that accurately reflects the show’s origin. Respect originated as a book by Vanderbilt professor and career consultant Dorothy Marcic who examined how popular music reflected women’s changing roles, ranging from the poignant dependence of “Someone To Watch Over Me” to the defiant independence of “I Will Survive” and on.

She then turned that book into this musical in which a Marcic -like character narrates her tome using the musical examples as well as anecdotes from her own life and that of her ancestors. There is not a single original observation here, although audiences will feel like they are watching their lives unfold – and that’s more than satisfying enough. There’s an undeniable swelling of pride as Womenkind increasingly takes charge of their lives as the century moves forward.

But Marcic does score with her sometimes wryly mocking, sometimes compassionate tone looking back at the quaint outdated attitudes. For instance, reviewing the 1950s, she mentions PMS before having her actresses sing the saccharine fantasy of “Tammy.” The show also pumps up the humor with projections that comment on the songs. When the quartet sings “Stand By Your Man,” the screens display Liz Taylor with procession of husbands, as well as Brad Pitt and Jennifer Aniston. The wonderful song “Sweet Talkin’ Guy” is accompanied by a procession of photos of Mark Sanford, Anthony Weiner and John Edwards.

Director and co-producer Peter J. Loewy is in tune with this. He allows, even encourages, Kinzel to sing a hilariously over the top take on Vicki Carr’s “It Must Be Him” to rib the neediness that pop culture wanted immortalized.

Loewy, producing artistic director of the Forum Theatre Arts Center in New Jersey, and Hinton, a nationally-known but locally based veteran, have a history with this work. The show had been evolving under Marcic’s direct involvement for a while in fundraisers, motivational conferences, fringe festivals and off-off-Broadway. Loewy and Hinton reworked it for a version that bowed at the old Cuillo Centre in West Palm Beach in 2004, moved to the 26th Street Theatre in Wilton Manors and then moved back to the Cuillo for a total of 500-plus performances. Since then, the evolving and updated work has played around the country.

When Marcic narrated this show herself, reviewers said it felt like a musically-enhanced lecture albeit an entertaining one. While there is still a shred of that feeling left, the fustiness is almost erased by the amiable and personable Peoples who makes it sound like a friendly discussion over cosmopolitans.

Again, the real draws are the singers.  Washington, who was a standout in Broward Stage Door’s Sophisticated Ladies a few weeks ago, is the vocal find of 2013 as far as Florida audiences go. She can bring Billie Holiday’s bluesy soul to “God Bless the Child” or kick out the jams on the Motown numbers or croon an affecting “The Greatest Love Of All.”

Peoples, who just triumphed in Slow Burn’s next to normal, gets fewer numbers because of his narrating duties, but her gorgeous voice caresses “Que Sera Sera” so that it doesn’t sound like a corny joke and rocks out “Piece of My Heart.” Bordonada also nails everything she’s given from “Whatever Lola Wants” to “Diamonds Are a Girl’s Best Friend.”

Kinzel not only has a lovely sound, but channels it through many different styles from the defiant “These Books Are Made For Walking” to the comic “It Must Be Him” to the heartbreaking “As Long As He Needs Me.”

And all four seamlessly mix into group numbers that elicit oohs of recognition from the audience such as the reaction to the opening notes of The Chordettes’ “The Lollipop Song.”

Hinton also leads a dead perfect pit band with Ranses Colon on bass and Tom Hinton on percussion. As a musical director, he not only melds these lock-tight harmonies, but ensure that the singers are bringing their own sound to these classics, not trying to imitate the originating singers.

The only ragged part in the smooth production was the lighting that often left singers in half-light. On the other hand, the Mizner Park Cultural Arts Center has been host to some of the worst acoustics we’ve ever heard. So supreme credit is due to sound designer Matt Kelly and technical director Evan B. Narlinger who have produced, conversely, some of the best sound quality we’ve heard in the region in quite a while. Go figure. Whatever they’re doing should be passed on to succeeding clients.

Respect takes you from “She’s Only a Bird In A Gilded Cage” and “I Will Follow Him” to “You Don’t Own Me” and “What’s Love Got to Do With It.” That makes for an entertaining journey.