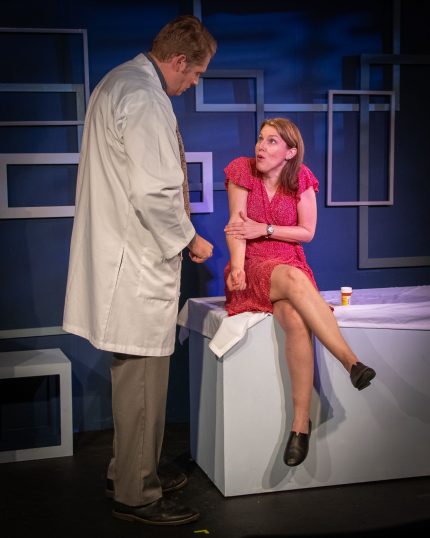 For older audiences who see the number of expensive pills they take each morning magically multiply over the years, the wicked satire of Big Pharma in the otherwise romantic comedy Rx is welcomed at Boca Stage.

But as cutting as Rx can be (one dotty scientist says “If I knew what we were doing, it wouldn’t be called research”) the Rx that playwright Kate Fodor prescribes for the modern malaise is, yes, love.

Yet thanks to a skilled cast and direction, the characters are such lost, lonely, aching and too recognizable people that the audience quickly comes to care whether they find not just love, but true fulfilling purpose in their lives.

The tongue in cheek premise introduces us to Meena Pierotti, the managing editor of Piggeries, the American Swine & Cattle Magazine. Meena is very good at her job but she is beyond depressed, almost in pain. She slips next door to the deserted older women’s underwear section of a department store to have a private place to break down and cry twice a day.

Phil Gray, a schlubby scientist for the soulless Schmidt Pharma that is mostly concerned about marketing a profitable commodity, is interviewing Meena as a potential test subject for the experimental SP-925 meant to cure the epidemic-level of “workplace depression” in 21st Century America.

As their interactions increase – and Meena’s anxiety is unabated – a relationship evolves. We learn that she is a frustrated poet with one failed published volume and he has balked at pursuing his real desire to help needy patients in underdeveloped countries. He just “want to do something important.” She just wants “to make something undeniably beautiful.”

But as possibilities for happiness present themselves, the relationship is endangered.

While the emotional tale is at the center of the narrative, Big Pharma regularly takes it on the chin, in the gut and the funny bone.

Phil is a good guy, a cog in the machine. He says the following with no iota of shame, just a recognition of “the job,” which is what makes this wryly humorous.

PHIL: We’re developing this drug for patients with a household income of at least $65,000.
MEENA: Really?
PHIL: I don’t get sent to screen the working poor. They’re not our target patient population.
MEENA: I didn’t know it worked like that.
PHIL: They don’t have health insurance. It costs two billion dollars to develop a drug. (pause) You have to be able to sell it to someone.

Director Genie Croft once again manages to meld these two unlikely bedmates in themes and tones into a whole.

Elizabeth Price, who just keeps adding fine performance after performance, makes Meena’s desperation and anguish palpable, and as believable as when she finds temporary happiness in the middle of the test period.

There are other denizens. Laura Turnbull is note perfect as Frances, a widowed senior Meena meets in the underwear section who is just now beginning to explore possibilities having realized that once she married a controlling husband, she became lonely.

Janice Hamilton is Allison, the ultra-corporate hack for whom marketing is a religion and regulations are commandments whether they make sense or not. Her creation exudes a slick manufactured ebullience most of the time because that’s what the handbook says.

Steve Carroll is Meena’s boss who has drunk the Kool-Aid and can get ecstatic over new data supporting a product in progress.

Jim Gibbons (so good to have you back on stage) is the slightly deranged researcher with an obsession about Albert Einstein and no idea what drug does what, likely a relative of Back to the Future’s Doc Brown.

Zach Geoffrey, convincing as a marketing exec, is a familiar face we can’t place but who looks a lot like one of Boca Stage’s founders.

For all the digs at drugs being no substitute for something that’s not found in vials, Rx is mostly an endorsement about finding a cure inside your heart for what’s troubling it in the first place.