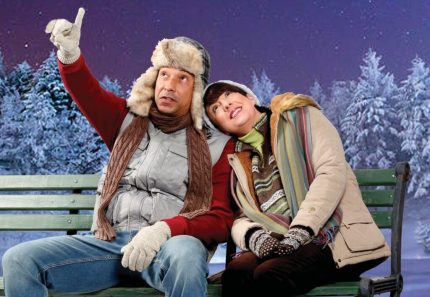 Brandon Morris and Niki Fridh are among the couples discovering love in Almost, Main at Palm Beach Dramaworks / Photo by Tim Stepien

The unabashed celebration of love in many permutations – from first connections to farewells – swirls around the stage like the snow and the aurora borealis lights in Palm Beach Dramaworks’ gentle, sometimes comic, sometimes bittersweet, consistently touching Almost, Maine.

The procession of vignettes about the quirky residents of the titular small town creating, testing, dissolving relationships during the exact same 15 minutes on a winter Friday night is shot through with the hope that love can be found or rescued.

Magical realism pervades every scene with an unspoken grin for the vagaries of life. The characters are not surprised and neither should you be when one character says she has her broken heart literally in her lunch bag, and when a possible beau – a repairman by trade — offers to fix it.

On paper, this and so many of the situations sound a bit too cute, a bit too twee, but director J. Barry Lewis and an agile quartet of actors Niki Fridh, Brandon Morris, Irene Adjan and Shane R. Tanner make it work by committing fully to the emotions experienced by 19 three-dimensional characters we grow to care for, who in less capable hands might seem cartoons.

Because underneath the considerable chuckles and guffaws, playwright John Cariani (better known as a Law & Order lab tech and on stage as one of the brothers in Something Rotten and was in the  just closed Caroline, Or Change) investigates the subtle complexity of relationships even while indulging in not-subtle metaphors in the situations.

For instance, a mentally handicapped man tells a young woman in a laundromat that he has a disease that literally keeps him from feeling pain as proven when he is slapped in the head with an ironing board. His brother has him adding to a list of things that can hurt people – and to be afraid of — because he never knows when he has been injured. Of course, during the encounter, he has to decide whether love should be on the list.

Trust me, all of this works, assuming you are willing to get on the sleigh ride meant to charm. But this isn’t Hallmark Channel fare; there are also tales of regret and disappointment. If you only want to see Neil Simon farce or Eugene O’Neill tragedy, you’ll be disappointed.

Each of the situations contains surprises you don’t expect initially, starting with the Northern Exposure-like characters who are not rubes or hicks, but have depths of yearning that are all too familiar to human beings for all their considerable quirkiness.

Back to the cast, there is delightful chemistry between the actors as they mix and match although, visually, the women are short and the men are tall. It’s terrific to see Morris on a break from his pursuits in New York; ditto for Tanner who triumphed as Dramaworks’ Sweeney Todd, and Fridh who just closed Theatre Lab’s To Fall In Love. Once again, Adjan is a marvel with her unique voice and her ability to inhabit a wide range of people whether in the bittersweet heart-felt episodes or the broadly comic ones that still have a message underneath.

All four make the most of Dramawork’s intimate venue where the expressions on their face – often changing when a character realizes something – are as eloquent as any speech.

Lewis, who we deemed long ago as one of the region’s finest directors, reminds us that not only does he have a talent for helming dramas, but also comic bits as well. It’s admirable that he has defined this idiosyncratic vein and gotten everyone involved on the same wavelength.

Brian O’Keefe’s costuming is an amazing array of comical but terribly accurate winter wardrobes appropriate for denizens requiring denim, lumberjack shirts, boots, scarves, headgear and the like, each one different for each character in each scene.  In one scene, the multiple layers of clothing become a comic device in of themselves.

Kirk Bookman’s lighting including a few appearances of the northern lights defines different places, but is surprisingly bright as if the scenes were occurring at noon instead of 9 p.m.

The chilly environment, complete with accumulations of snow in corners and an array of flight that are sometimes stars and sometimes snowflakes, is by Michael Amico.

To protect the run, Dramaworks has experienced hands Jeanine Gangloff Levy as David A. Hyland as understudies.

Helping set the environment throughout is an engaging score of folkish Windham Hill-like music in which a recorded guitar, harmonica and fiddle are woven together.

Perhaps the reason this is one of most performed plays in American theater over the past ten years is this anthology of distinct individual stories and tones delivers a sense that we share all the humanity and longing of all these people, creating a community not just of the folks in Almost, Maine, but the world around us as well.