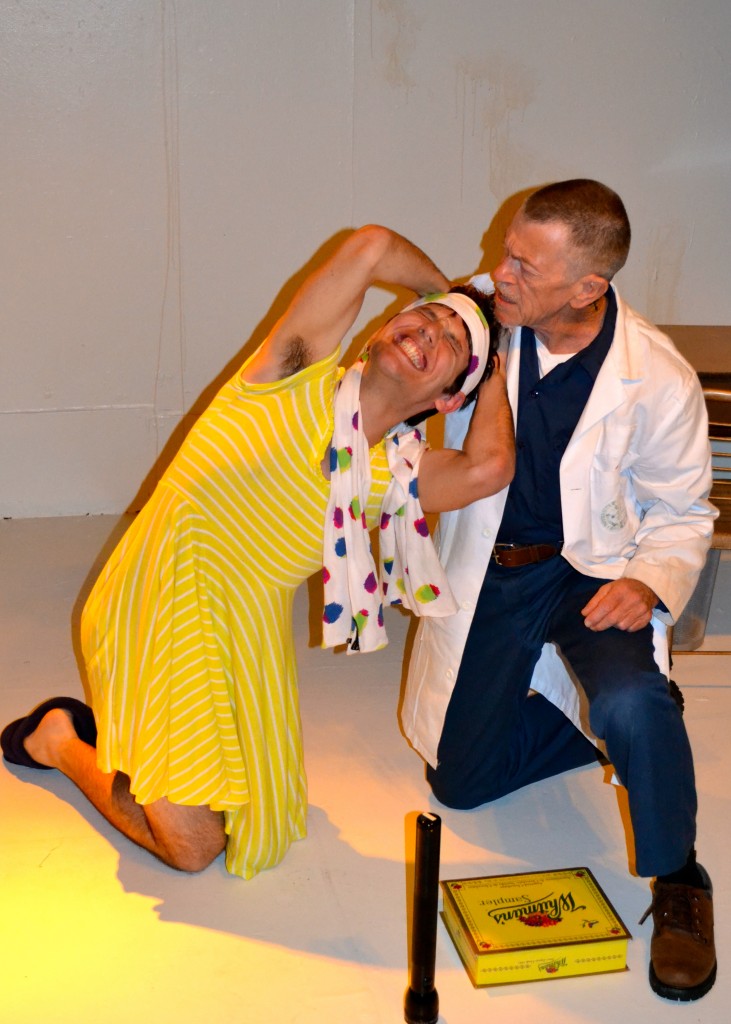 Remember in your Intro to Psych course that series of paintings of a cat by a man slowly succumbing to schizophrenia? Watching Sarah Kane plays such as Thinking Cap Theatre’s Cleansed is like that: a peek inside a disintegrating mind.

Like Kane’s Blasted at GableStage in 2010 and 4:48 Psychosis at Naked Stage in 2008, Cleansed defies reactions that involve verbs such as “liked” or even “appreciated.”

Even more than those other two plays, this minimalist script given flesh and form by the imagination of director Nicole Stodard is a harrowing and frankly upsetting descent into Hell jammed with random sadistic violence targeting those who dare love.

The British playwright clearly saw the world as an intolerable charnel house marked by unlimited cruelty, a bleak vision that likely fueled her suicide at age 28 in 1999. In this work as much any of hers, you likely won’t dope it all out, you likely won’t “enjoy” most of it, but your psyche won’t leave untouched.

There’s no discernable plot per se, but there is a sort of narrative arc. A sadistic doctor (Jim Gibbons) murders a drug addict (Daniel Nieves) on the street. The victim’s sister (Christina Jolie Breza) , who has a psycho-sexual bond with her sibling, wants to be admitted to the doctor’s renegade sanatorium as the first step in melding her being with the visible spirit of the her dead brother. Another inmate (Robert Alter) falls in love with the sister. Meanwhile the doctor keeps punishing the lovemaking of a couple (John Robert Warren and Andy Herrmann) by cutting off body parts. And finally, the doctor keeps looking for love by paying for fleeting minutes with a peep show dancer (Desiree Mora).

To be honest, I only caught glimpses of Stodard/Kane’s underlying themes.  I felt much better after the show overhearing one of the actors tell his friends that he had no idea what the play was about either.

It was on the ride home that my wife provided a logical interpretation of what we’d seen and reinforced the likelihood that Stodard had a cogent vision guiding the proceedings: Everyone in the play is seeking love, of a sort, and a connection with another person. But, it seems clear to me, that Kane thinks the world extracts horrible price tags from those seekers.

It may not matter whether we “get it” or not. Drawing from the Theater of the Absurd and the Theater of Cruelty, Kane and Stodard create what may be the theatrical equivalent of contemporary visual art: The artist is not overly concerned that you walk away with a clear comprehension of his or her vision as the end product of the artistic process. Instead, they are pleased if the work stimulates each individual audience member in extrapolating their own vision from the experience. The Grand Guignol aside, that makes for very rough going for even the most intellectual of traditional theatergoers who prefer a few signposts to navigate by, even in their surreal and stylized drama. That endless effort also makes for an exhausting evening. I admit looking at my watch wondering when this unpleasant 75-minute piece was going to reach its finale.

Other than the always fine Gibbons, no one in the cast here is going take home a Carbonell any time soon. But you have to give them all enormous credit for gamely investing themselves completely in the situations and wrestling with the material as bravely as Stodard and the audience. Warren, in particular, as the much-mutilated lover, convincingly expresses the extreme regret at failing his lover for one fleeting moment.

Playing in the famously tiny space at Empire Stage near the railroad tracks in Fort Lauderdale (the former Sol Theatre), Thinking Cap has little money for staging other than props, thrift shop clothes and a few sticks of furniture. But Technical Director David Hart has provided an appropriately hallucinogenic soundscape.

To say this is not for everyone is beyond understatement. But buried in Kane’s intentional excess is a dimly perceived something that is thought-provoking.