Slava’s Snowshow At The Arsht: Winter Is Coming — In July 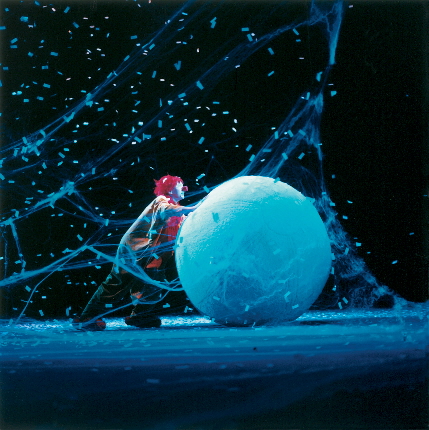 For the third time in nine years, a blizzard is raging inside the Arsht Center in the middle of a blazing summer as Slava’s Snowshow returns and you once again will be picking white stuff out of your hair even if you sit in the back row and finding flakes in your clothing hours later at home.

And that’s not even the mouth-dropping coda to the Russian-based fantasia that showcases classic clown skills against the showmanship and stagecraft of a Cirque du Soleil production.

Armed with smoke, spotlights, soap bubbles, plastic bubbles, confetti, wind machines, wacky costumes, a very loud and eclectic score (from the Brazilian “Mais Oue Nada” to TV’s jazzy “Peter Gunn Theme”), and a cast of mimes whose bodies bobble like cartoon characters, this all-too-brief production will delight entire families including young teens determined not to like anything.

It’s a procession of self-contained skits starring a rubber-faced sad sack and his mute buddies whose circus train has stopped at some snow-covered wonderland. While the special effects are impressive, it’s the simple but effective clowning that transcends language. At one point, the nonsense-speaking always painfully slow-moving Slava portrays both teenagers on a telephone trying to hook up for a date; in another, he plays a child going away to boarding school and the mother comforting him, except the mother is simply a hat and long jacket left on a coat rack.

In the program, the geniuses responsible for this vision (creator Slava Polunin, director Victor Kramer and a deft sound-and-light team) give you some artistic mumbo-jumbo about how there is a deep message about releasing the joy and wonder of our inner child or some such rot. In truth, there is less plot line than a Cirque production and less of a unifying theme than something from the Ringling Bros.’ oeuvre. Clearly, they are influenced by Beckett, Gogol, Marcel Marceau and Emmett Kelly.

Who cares! Between the boundless imagination of these artists and their ingenuity in involving the entire audience directly inside the proceedings (we just can’t give you any spoilers), this is a thoroughly satisfying interactive half-evening’s entertainment.

So if your kids are tired of hearing what winter up north used to be like, bring ’em along and show them Christmas in July

Slava’s Snowshow plays through Aug. 6 at the Adrienne Arsht Center for the Performing Arts, 1300 Biscayne Boulevard, Miami. Performances are 8 p.m. Wednesday-Saturday, 7 p.m. Sunday and 2 p.m. Saturday-Sunday. Running time 90 minutes including one intermission, but the curtain call surprise can add another 15 minutes. Tickets are $30-$75 Call (305) 949-6672 or visit www.arshtcenter.org.