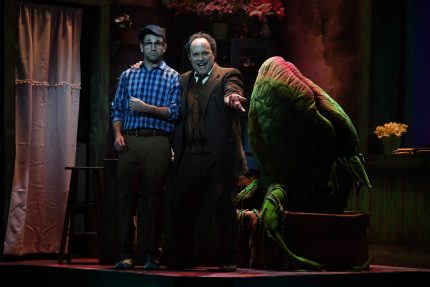 Seymour (Nick Anastasia) is being wooed by Mr. Mushnik (Matthew Korinko) for the benefits of Audrey II in Slow Burn Theatre’s Little Shop of Horrors / Photos by Larry Marano

Obviously, the creators of the horror comedy rock musical Little Shop of Horrors never meant for us to take the show too seriously.

Indeed, the popular, award-winning tongue-in-cheek musical comedy that world premiered Off-Off-Broadway in 1982 is a satire. In particular, it pokes fun at science fiction, “B” movies, the Faust legend, and musical comedy itself. The musical, one of the longest-running Off-Broadway shows, is a laugh fest.

Still, today, when a virus that we know too little about is spinning off into new variants and still killing people, it is just a tad unnerving to think about man-devouring plants multiplying and planning to take over the world. As a result, we might shake just a little more today while watching Little Shop of Horrors.

Such shivering may begin even before you witness the professional, nonprofit Slow Burn Theatre Company’s delightfully comic, touching, energetic and believable production. It runs through Oct. 30 in Slow Burn’s intimate Amaturo Theater within the Broward Center for the Performing Arts in Ft. Lauderdale.

Before this production starts, green fog rises periodically and ominously from an area just offstage, making a hissing sound. It’s a foreboding spectacle and can hint at what is to follow.

In fact, the production’s ominous quality continues during the prologue. That is when a deep, creepy voice speaks the following words. They sound particularly chilling today: On the twenty-third day of the month of September, in an early year of a decade not too long before our own, the human race suddenly encountered a deadly threat to its very existence. And this terrifying enemy surfaced, as such enemies often do, in the seemingly most innocent and unlikely of places.

But then, the show, set in the 1960’s, officially begins. And this production instantly reassures us that we are witnessing an upbeat, escapist comic spoof.

Specifically, the Greek chorus-like trio comprising Chiffon, Crystal, and Ronnette energetically sing the rousing title song. By the way, the show’s creators named these street urchins after actual singing groups the Chiffons, the Crystals, and the Ronnettes.

The performers portraying the trio, Kareema Khouri (Chiffon), Nayomi Braaf (Crystal), and Khadijah Rolle (Ronnette) set the tone for the entire production. Specifically, they lend their characters, who comment on the action throughout the show, the right amount of sass, vibrancy, and humor.

In Little Shop of Horrors, the meek floral assistant, Seymour Krelborn, names a new breed of plant Audrey II, after his coworker crush. The potty-mouthed, R&B singing, man-eating plant promises endless fame and fortune to the down and out Krelborn. That is, as long as the poor man keeps feeding the carnivore blood. Eventually, Seymour and others discover that the plant seeks to take over the world.

Without forcing it, director/choreographer Patrick Fitzwater milks the show for every last drop of comedy in the piece. The result is a hilarious afternoon or evening of live musical theater.

While Fitzwater focuses on the comedy, he gives equal weight to the pathos. For instance, scenes between Seymour and Audrey sound impressively sincere and sympathetic. Seymour (Nick Anastasia) and Audrey (Caiti Marlowe) convince us that they belong together. And, so, we pull for them to become a couple. In particular, we hear a longing and loving quality in the performers’ voices as they sing tender songs such as “Somewhere That’s Green” and “Suddenly Seymour.”

While Mr. Mushnik (a fine Matthew W. Korinko) can come across as impatient and stern, we hear genuine concern emanate from his voice when the flower shop owner inquires about Audrey. And there’s a loving quality in Mushnik’s voice as he and Seymour sing and dance to the klezmer/tango-like song, “Mushnik and Son.”

Generally, the performers possess strong, rangy and expressive singing voices. To their credit, they emote well and make singing seem natural to them. Meanwhile, a vibrant, pleasant-sounding five-piece live orchestra accompanies the actors without drowning them out. The music director is Eden Marte.

Little Shop of Horrors boasts a tuneful, memorable, and varied score by librettist and lyricist Howard Ashman and composer Alan Menken. They are the team behind shows such as Beauty and the Beast, The Little Mermaid, and Aladdin.

For Little Shop of Horrors, the duo created songs in the styles of rock and roll, doo-wop, and early Motown. The musical numbers are specific to the show’s setting – an urban skid row from the early 1960’s. Also, the musical is full of “I want” songs, which lend a dramatic drive to the action; such songs express character objectives.

One of the more challenging characters to portray in the show is Audrey. Specifically, a performer must convince us that Audrey is a bit airheaded and subservient. But, at the same time, we need to believe that Audrey possesses genuine feelings and isn’t just a “ditzy blonde.” Otherwise, Audrey becomes little more than a caricature and it becomes hard to pull for her. Fortunately, in Slow Burn’s production, Caiti Marlowe does not allow that to happen. Her Audrey might be low in self-esteem, but the performer imbues Audrey with believable sincerity and sensitivity.

Come to think of it, Audrey’s total subservience to her sadistic boyfriend, Orin Scrivello, DDS, sounds out of sync with today’s zeitgeist. But that’s an issue for another article. So, too, is the implausibility of Seymour willingly going to Scrivello’s office for a dental appointment.

As Seymour, Anastasia convincingly imbues him with a sweet (but not saccharine) disposition. In addition, his Seymour comes across as a nerdy nebbish who is well-meaning but clumsy. And we sense how torn Anastasia’s nebbish really is during the scene taking place in Scrivello’s dental office.

Speaking of Scrivello, a showy, menacing and commanding Jeffrey Keller portrays the character with a believable outsized ego and bad boy persona.

While you might identify Scrivello as the piece’s villain, that role may belong to the plant. After all, it is responsible for the characters’ demise. The voice behind the talking, human-devouring plant belongs to Tarik Zeigler. He possesses a booming voice that sounds, at turns, teasing, playfully desperate, stubborn and enthusiastic. Of course, credit must also go to puppeteers Aaron Atkinson and Chad Ethan Shohet on a job well done. After all, among other things, they make the plant puppet’s mouth move in sync with Zeigler’s voice.

Also, behind the scenes, scenic designer Kelly Tighe has created a main structure that opens and closes like a large, oddly-shaped mouth. When the structure is open, it serves as the interior of Mushnik’s run-down flower shop on Skid Row. The dirt-smudged interior of the shop is pinkish-purple and green, lighter colors that befit a comedy. Tighe has positioned the flower shop at center stage. On either side of it are run-down, stand-alone, decrepit-looking structures that place us in a run-down neighborhood such as Skid Row.

While Little Shop of Horrors experienced its world premiere 40 years ago, it is a show that continues to speak to us in different ways. Ambition, greed, justice, love, fame, and what people will do to achieve it are among the timely and timeless themes explored. In fact, the show can serve as a cautionary tale about what can happen if you do anything to get what you desire.