Milk and Honey Is Charming Musical, But Very Much the ’60s 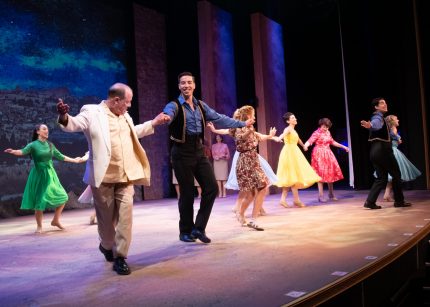 Unabashed charm is not a quality one associates with modern musicals such as Hamilton or Next to Normal. But it is the predominant and reasonably satisfying virtue if you take the Wick Theatre’s time machine back 61 years to the opening of Milk and Honey, the first full-length musical by this promising newcomer Jerry Herman.

The classic conventional musical about Americans visiting burgeoning Israel a decade after statehood has all the standard tropes – production numbers, quiet ballads, yearning romance, humor and one Kennedy Era thread that would make Boomers and Millennials cringe if written today.

The Wick’s enthusiastic production molded by director Peter Loewy sits comfortably in an era its usual audience remembers well and will embrace.

It benefits immeasurably from the casting of the leads. Phil, a late middle-aged American businessman visiting his daughter married to a Negev farmer, is played by local favorite Avi Hoffman as an uber-mensch. He is instantly smitten with Ruth, an American with a tourist group of late middle-aged widows blatantly seeking husbands, played by the always dependable Laura Turnbull. And Clara, the comic relief leader of the tour, played on Broadway by Yiddish icon Molly Picon, is given an original spin by Irene Adjan.

The story is deeply rooted in the attraction of rebirth and that idea that second acts are available if you have the courage to take chances.

Ruth is antsy about getting involved with anyone and Phil doesn’t tell her that he is still married to a woman from whom he has been deeply estranged for 20 years. But romance blossoms on a visit to Phil’s daughter’s farm as they get caught up in the infectious spirit of youth building a new nation. Will Phil move to the country permanently? Will Ruth and he stay together in this region? Will Clara and her troupe of other widows find husbands to take home with them?

The entire evening is clearly a creature of the period, especially with the rimshot humor that Adjan nails. But book writer Don Appell quietly lays in slightly darker colors. Both his dialogue and Herman’s lyrics acknowledge hostile Arabs looming over permeable borders off-stage. Creating the kibbutz out of the Negev is portrayed as back-breaking.

In fact, the show delays a bit opening with a big production number; instead, Phil interferes when a Tel Aviv policeman tries to force a poor Yemenite girl to remove her lamb from a street. And the finale, without giving anything away, is a bittersweet end with only a ray of hope – echoing the future of the country itself. Indeed, much of the show is tinged with the sense that time is fleeting.

And yet, the whole thing isn’t too far removed from the standard Broadway evening when the wives left the kids with a babysitter and met the husbands after work for a quick dinner and then “a show.” Broadway has come a long way, baby.

At the time, Herman was barely known for material featured in off-Broadway and Broadway revues; an intrigued producer asked him to try this first full-length narrative musical. Hello, Dolly and Mame were years away and while the work here isn’t on that level of quality, you can hear echoes of those pieces to come.

It earned modest reviews and a passable 543 performances, likely from Hadassah field trips. But it is rarely revived, and not a lot of people remember seeing it. Boomers and their parents may remember its relatively popular original cast album starring Metropolitan Opera stars Robert Weede and Mimi Benzell when people bought the latest Broadway record to see if they wanted to buy a ticket.

To be fair, even today, the title song remains a wonderful throat-clutching celebration of joyful pride in the hard-won achievement of young pioneers knowing they are pioneers. And the “Independence Day Hora” is a rousing number rolling over the Wick auditorium.

Another asset is Adjan, a fine actress in both drama and comedy, having the proverbial field day with the classic ’60’s humor that Appell gave Clara. Her timing is dead on.

In 2022, post-feminism, it’s a bit ludicrous – even a little off-putting — watching the widows so voraciously man-hungry, but, hey, that was the humor of the time, and the extreme portrayed here was meant to be funny.

An interesting aspect is the casting of Hoffman and Turnbull. She has a fine voice and Hoffman’s may be a bit thin at times in the upper part of the register, but both deftly deliver a deep feeling of warm, recognizable real people who win over the audience. You can bet you didn’t see that in Weede who was more comfortable playing Rigoletto and Benzell as Queen of the Night in The Magic Flute. Ruth’s reticence and then growing openness to a new love is perfectly depicted by Turnbull. Hoffman’s Phil is unfettered exuberance, but he also delivers the loveliest ballad in the show, “Let’s Not Waste A Moment.”

Loewy’s staging is adequate, although most of the time characters just line up in a row. Oren Korenblum’s choreography is similarly adequate with few surprises, although a few numbers like the “Independence Day Hora” swell with energy as dancers whirl in a circle.

The full sound of the score comes from master musical director and arranger Phil Hinton who supplied the digital music.

The supporting cast includes Whitney Grace as Phil’s daughter Barbara who wonders if she made the right choice staying in Israel; Elliot Mahon as her husband who has the best voice in the cast; local regular Jonathan Eisele as the sardonic sabra Adi; Ravit Allen as his pregnant wife-to-be; plus, there’s a fervent corps of 10 singer-dancers whose skill ranges all over the map.

Notable for the underused talent here as the widow contingent are the superbly skilled veterans Elizabeth Dimon, and Patti Gardner, plus Coleen Pagano, Denise DeMars and Heather Simsay.