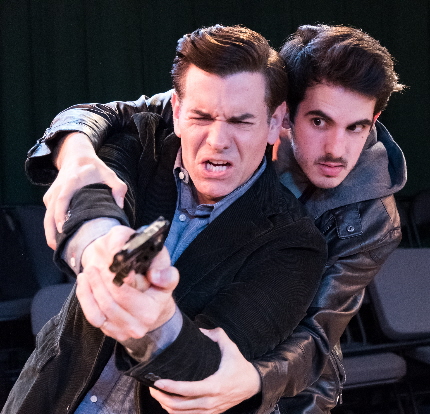 Revelation after revelation – none of which the playwright wants us to spoil – are exposed like the proverbial peeling of an onion until the underlying secret lays naked in the world premiere of Ben Andron’s Broken Snow at the J’s Cultural Arts Theatre in North Miami Beach.

The layer by layer reveals, each providing another piece toward the solution of a mystery of the heart, constitute the guts of the 90-minute journey.  But it climaxes with a shattering penultimate aria by actor Avi Hoffman in which the full truth and true goal of the drama comes clear.

Struggling not to give much away, the play—inspired by a real situation – is actually simple in its theme: the sins of the past infect our present, no more so than when those wrongs involve the damage that parents do to their children.

But that never comes into focus until the final minutes; the audience is as mystified most of the evening as the two strangers who meet in an abandoned house with no idea who each other is or why they are there. It’s their crooked meandering path toward enlightenment, a trip studded with reenactments of past incidents that must inherently engage the audience.

If the circling goes on a tad too long when the audience is presented with so little meat to chew on, this production succeeds most of the time because director Michael Andron (the playwright’s father) has two veteran Equity pros and a promising newcomer to keep the onstage anxiety level percolating.

The play opens with the ghost or memory of Kris (Hoffman) musing aloud an almost incoherent story of a serpent and a suffocating snowfall. As he speaks, a scruffy young man James (Daniel Llaca) is searching through an abandoned house. He is interrupted by the entry through a window of Stephen (Nicholas Richberg).

Neither belongs here, both are spooked by the presence of the other. Stephen is a straight-arrow law enforcement officer while James is a twitchy drifter with a manic verbosity. Both are amped up with suspicion and anxiety. Guns are drawn. A struggle ensues. Finally, they try to determine who each other is, why they are in the house, what they are seeking and all the other obvious questions. That’s about as far as we can go except to say that both strangers have the key to each other’s dilemmas and both lie a great deal.

The challenge is to keep the talky play intense enough to hook the audience. They succeed – although there are moments you want them to just get on with it – but it all pays off as the picture sharpens into focus at the end and all the clues add up to an moving statement.

Andron is well-served by the cast. The veteran master Hoffman’s haunted man can smile benignly while inflicting pain, emit affection and rejection with a turn of the head. Llaca, a recent grad of New World School of the Arts, is all jitters and eccentricities, which ebb when recalling his past. Richberg has the least to work with in his character, but this is one of best actors in the region and he manages to inhabit a tortured man struggling with internal torment.

The story is well-constructed and Ben Andron effectively waxes poetic in Kris’ retelling of a macabre fairy tale. The piece needs just a tad more work because some of James’ verbal reaction lines are just uncredible and unnecessary non sequiturs. Indeed, Andron is enjoying the inch by inch process a bit too much; the play could be subtly trimmed a line here or a line there.

Michael Andron keeps the tension palpable and injects enough circular movement on a modest stage surrounded on all four sides by the audience.

The author is a former Floridian with credits in Los Angeles as a writer/producer on animated films and trailers for feature films. He has written two other plays including White’s Lies, which was produced off-Broadway in 2010. This show’s producer Aaron Grant is a childhood buddy

Michael Andron has been running a community theater and children’s program here at the Michael-Ann Russell Jewish Community Center for 10 years, racking up about 60 productions. This marks the troupe’s first professional production. His JCAT company plans to occupy a new theater venue at the center this winter. While JCAT may mount other professional productions, Andron expects to return much of the schedule to community and children’s programming.

Note: Because of the Jewish Sabbath, pay close attention to the times of performance. Since this occurs on a JCC campus, all vehicle drivers must stop at a guard shack and show a photo identification to an employee who will photocopy it.

One Response to Spoiler Alert: Mystery Abounds In Premiere Of Broken Snow