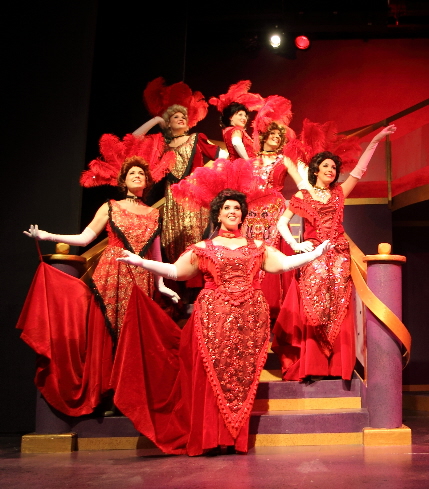 “Diverting” is a loaded word. When you’re watching Watch What Happens  on cable, no one complains that you can’t remember much of it an hour later. In theater, where the entry fee is a bit higher, some critics look down on shows whose exclusive goals are to entertain.

But legendary Broadway composer/lyricist Jerry Herman has spent his life as an unapologetic champion of leaving audiences after two hours feeling diverted.

So diverting is the right word for the venerable revue of his ouvré, Jerry’s Girls, at Broward Stage Door, a procession of 38 hits and lesser-known songs from at least eight shows including Hello, Dolly! and Mame . Most were made popular by iconic women in the American musical theater (although some were introduced on stage by men).

His shows epitomize the mainstream musical by fusing lush melodies, witty lyrics and unabashed sentiment into rousing anthems, heartfelt ballads and unforgettable production numbers. No one questions that he brings considerable skill and craft to his work.

To illuminate them, Stage Door’s director/choreographer Jonathan Van Dyke has brought in six chanteuses to deliver more belts erman’s numbers with more belts than you’ll find in the leather booths at the Festival Flea Market.

As long as you have competent singers who invest some energy in their performances – and Stage Door does — there’s no way this show can fail; the material is simply that good.  It’s not especially challenging, which is in keeping with Herman’s ethos, and it’s not especially thrilling, which Herman’s music can be.

The revue conceived by Herman, famed choreographer Wayne Cilento and Larry Alford is pretty standard issue. It opens with special lyrics to “It’s Today” that list every famous woman who ever sang Herman’s songs. He also tosses in the lyrics he wrote when “Hello, Dolly!” was used for an Oscar Mayer commercial and as a campaign song for Lyndon Johnson.

Otherwise, every song you can summon by memory is here as well as showtunes only fans know, so the program smartly lists the numbers’ origins. Some songs are done solo; others by various combinations of the cast. Having six performers instead of the usual three gives the group numbers extra heft and gives Van Dyke a chance to move the ladies around in modest dance steps.

His staging is workmanlike, although nothing especially memorable. He does have a problem knowing what to do with the singers during Herman’s instrumental breaks before they come back and sing one last chorus; often they just walk up steps and turn around as if they forgot something.

Generally, the ensemble here works pretty well as a group although their performance seems awfully generic. It’s when each woman has a solo number that they invest them with some personalized passion.

First among equals is Elizabeth Sackett who may have been the best thing about Stage Door’s recent Damn Yankees. Her renditions of the lilting “Ribbons Down My Back” from Dolly and the genial “Shalom” from Milk and Honey are warm and lyrical. Sarah Smith hits the back of the auditorium with her “Before The Parade Passes By” and “I Don’t Want to Know” from Dear World.

Erin Pittleman’s lovely “I Won’t Send Roses” makes you forget it was originally sung by the Mack Sennett character in Mack and Mabel. Amanda Kuchinski is equally good on “Time Heals Everything,” the song that Bernadette Peters nailed in the same show. Leah Sessa applies verve to everything she sings but is affecting in “Song on the Sand” from La Cage aux Folles. Bethany Wagner is cast with primarily comedy numbers including “Gooch’s Song.”  All have charming voices that are much stronger in the lower registers and tend to wander a bit in the higher reaches.

These numbers require a full Broadway sound and Stage Door has brought in a solid prerecorded mix orchestrated by the Alhambra Dinner Theatre. As good as it is, though, the absence of a live 25-piece pit orchestra has rarely been felt so keenly.

The most stunning part of the production is the costumes chosen by Dan Kelley. The ladies have a new cocktail dress or character outfit for nearly every scene. And when the first act ends with all six singing “Hello, Dolly!” each wears a unique floor-length red sequined gown.

This is a passable way to pass an afternoon, bringing back memories of previous evenings in the theater.