Posted on September 4, 2018 by Bill Hirschman 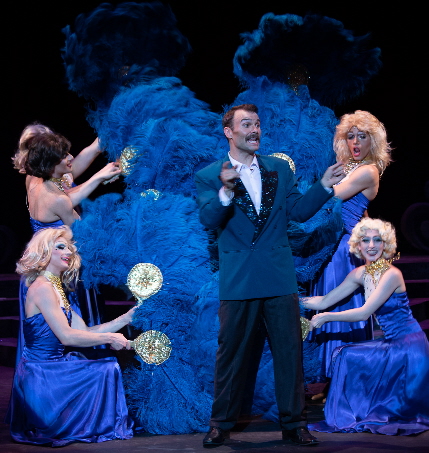 It’s hard to imagine but absolutely true that the creators and producers of La Cage aux Folles in 1983 feared that their new big-budget musical would be rejected by Broadway audiences, not to mention the tourist trade.

Now as mainstream as The Sound of Music, Broward Stage Door’s production underscores La Cage’s inarguably universal virtues of love and loyalty, delivered with only a wry smile to acknowledge that its protagonists are an aging gay couple including a drag queen surrounded by a half-dozen “showgirls.”

While undeniably entertaining, this edition is noticeably missing some of the pizzazz that the material requires to make it a memorable evening; it lumbers along without generating much electricity, surprisingly, least of all in its cabaret numbers.

Maybe it’s because this show has become so much a part of the canon that its boundary-crossing joyous proclamation of alternative sexuality has been absorbed into 21st Century culture.  It no longer feels vicariously and daringly liberating in its titillation, as the lyric celebrates, “It’s bad and beautiful, it’s bawdy and bizarre.” Several seniors at Sunday’s matinee audibly sang along with the star even as he initiated the now familiar opening lyrics of “The Best of Times Is Now.” 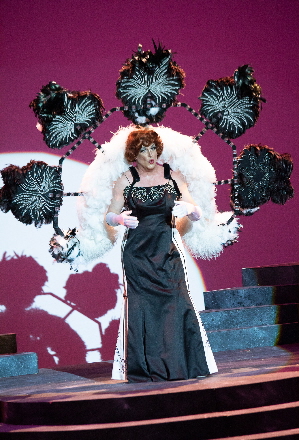 But local veteran Larry Buzzeo is a snug fit for the St. Tropez club’s drag diva Zaza, coming alive when he is wearing gowns and wigs that transform him into personas echoing everyone from Bette Midler to Marlene Dietrich. When he sings the anthem, “I Am What I Am,” it’s not the traditional proud declaration of independence so much as a heartfelt plea for the world to acknowledge that this is who he is. His off-stage identity of Albin is far more vulnerable and needy than another of his memorable transvestite roles as Dr. Frank-N-Furter in The Rocky Horror Show. The audience wants to take him home and protect him. At the same time, Buzzeo, a veteran of countless comic roles, savors the physical comedy such as striving to mimic masculine body language.

Albin’s more conventional partner, Georges, is the fourth or fifth most thankless role in musical theater because other than his devotion to Albin, the only color provided by bookwriter Harvey Fierstein is an emcee’s flair. Fortunately, Stage Door has hired a young New York actor Jamie Michael Parnell, who adorned with a moustache slowly grows into part as the evening develops. His acting is passable, his charisma adequate, but his strength is a gorgeous smooth voice. In a part famously played by people who can barely sing (Kelsey Grammer and, for God’s sake, Gene Barry), Parnell’s rich expressive voice delivers one of the best renditions we’ve heard of “Song on the Sand,” and his “Look Over There” should make your throat close up.

Coping with a short rehearsal period for such a large undertaking, it’s all molded by Bruce Linser, an experienced director. He doesn’t shy from liberally involving the audience; for instance, two handsome shirtless waiters roam the aisles as the overture begins, to loosen up the audience with some ribald interaction with audience members. But while the show doesn’t exactly drag, neither does it soar in pace or spirit, and its runs about 15 minutes longer than some earlier productions.

The choreography by Danny Durr is serviceable if not especially impressive or crisply executed. Some of the six Cagelle dancers are adequate if not remarkable, others are not so skilled, and one has no grace, precision or timing whatsoever. Who knows? Maybe that’s intentional to represent that the club is not the Lido or the Folies Bergere. Besides, it’s hard dancing in high heels, isn’t it, fellas?

The musical direction and the band was led by Paul Reekie (who did similar duties for MNM Productions’ edition last October). More than anyone else connected the production, the band captures Jerry Herman’s joie de vivre. A nod to musicians Karen Nagy, Rick Kissenger, Andrea Gilbert, Doug Michels, Jason Pyle and George Mazzeo.

Conor Delves has the third most thankless role in musical theater as Georges and Albin’s son, Jean-Michel. While he can’t quite deliver the initial self-absorbed thoughtlessness of the character, he has a strong voice and his eventual coming aware is credible.

Filing out the principal roles are the brassy Kat Gold (unrecognizable from Hedwig and the Angry Inch’s Yitzhak) as restaurateur  Jacqueline; Alexandra Van Hasselt as Jean-Michel’s beloved; James A. Skiba as the homophobic politician father; Dalia Aleman underused as his wife; and Seth Trucks, as the stage manager suffering various broken body parts from dating the show’s whip-toting dancer.

With what is likely a limited budget, Jerry Sturdevant provides scores of Crayola-colored costumes with flouncing hems and shoulders, Michael McClain designed the sets and Ardean Landhuis lit them.

This marks Broward Stage Door’s first show in its new home at the two-year-old Lauderhill Performing Arts Center a half-block north of Sunrise Boulevard just off  the east side of US 441/State Road 7. Turn east on the traffic light at 11th Street. Producer Dee Wilson Bunn has happily taken advantage of a facility that for the first time gives her productions wings, fly space, spotlights and a wider stage.

A few words about the Lauderhill space: It can hold 1,000-plus people, but the managers have ingeniously set up an auditorium-wide web of huge cloth stars at the back of the down front orchestra section to isolate a 400-seat space for Stage Door. It has more lights and sound equipment than Stage Door is used to, but the microphones’ frequencies reportedly are too close on the spectrum, so sometimes the sound cuts in and out. This can and needs to be fixed by the landlords.

It’s a lovely beige and maroon auditorium with comfortably-cushioned seats except that they are quite narrow and have little leg room. If you’re built tall or wide, ask for an aisle seat. The designers thoughtfully provided more restrooms than usual. A concession stand in the lobby offers popcorn and it appears you can take food and drink into the auditorium. Free parking is ample but it is hard to locate: Drive on the access road clockwise around the north side of the building, all the way around to the far south side.