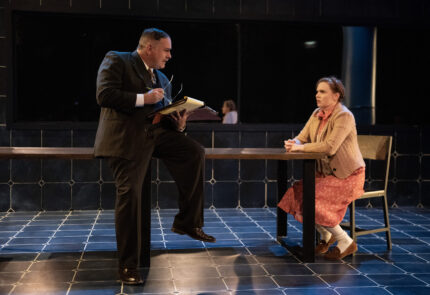 It’s been said many times — and used as the lead in myriad news articles and reviews — that evil thrives when good people, normal people, do nothing. This banality of evil provides the crux of playwright David Meyers’ incisive play We Will Not Be Silent, receiving a bold, powerful production at GableStage.

Set in Munich, Germany, during 1943, We Will Not Be Silent shows good, normal people who will not be silent as they see the atrocities going on around them and the crimes against Jews, gays and other minorities by the Nazis. GableStage Producing Artistic Director Bari Newport delves deep to explore the humanity and keep the provocative story in constant motion, making what is essentially an issues play about the Holocaust into a vibrant production.

Meyers draws from real people and events, adding to the intensity of We Will Not Be Silent, as he tells the story of Munich college student Sophie Scholl, who, with her brother and others, formed a propaganda-based non-violent anti-Nazi organization called The White Rose. They were arrested and guillotined.

We Will Not Be Silent revolves around the interrogation of the 21-year-old Sophie (a stunning Meredith Casey) by former civilian German detective Kurt Grunwald (a razor-sharp Jason Peck), who will attempt to persuade the college student to admit her crimes or renounce The White Rose to save herself. Throughout the 90-minute play, Sophie’s moral strength is tested, forcing her to decide if she is willing to risk everything, including her family, to stand up for social justice.

Casey expertly shows Sophie’s many layers. She often questions her own motives and knows she is no saint, nor does she believe herself to be a hero. But the injustice of persecuting and executing people because of their religion or background eats away at her. This a righteous crusade she cannot walk away from.

Peck illustrates how his often soft-spoken Kurt is a master manipulator. At first, he seems like a concerned uncle who wants to save this young woman from herself. He said he agrees that Hitler’s plans are wrong, but he is only doing his job — a refrain often repeated by the German soldiers during and after the war. It would be so simple for Sophie to save herself, he says: just publicly renounce the resistance movement and endorse Hitler. But for Sophie, it is not that simple.

Peck’s story arc quickly grows from the seemingly sympathetic to the belligerent and volatile as he uses emotional and physical tactics as the interrogation stretches over two days.

Casey and Peck make their characters equally matched, each imbuing a sense of realism. At first, Sophie may seem to be more of a victim, a weaker character if, for no other reason, because of her sex and age. But Casey illustrates Sophie’s inner strength, showing she is a full match for Kurt. Casey and Peck show how each believes they are right and that each is a patriot. Except Sophie is right.

The effective set is a long table, a kind of battle ground for Sophie and Kurt, and a few chairs courtesy of scenic designer Frank J. Oliva. A long mirror on the back wall, that soon proves to be a two-way window we expected it would be, adds to the intensity, especially when the uniformed Nazi guard (played by an unnamed actor) appears to oversee the interview. Lighting design by Victoria Murawski and sound design by Peck add to the atmosphere.

To continue the dialogue about We Will Not Be Silent, GableStage has planned several free events and speakers. Visit https://www.gablestage.org/events/ for details. In addition, both Producing Artistic Director Bari Newport and Resident Dramaturg Karina Batchelor will be presenting a pre-show talk for We Will Not Be Silent before each performance.

A word about the casting. This is not to take diminish the depth and the intensity of the actors’ performances, but only Jason Peck lives in South Florida. He is the Theater Director of the Benjamin School in Jupiter. But Casey and Eddy are both based in New York, according to their biographies. South Florida has many solid actors of various ages who have a wide range.

We Will Not Be Silent runs through Jan. 29 at GableStage in the Biltmore Hotel, 1200 Anastasia Ave., Coral Gables. 2 p.m. Wednesday and Sunday; 7 p.m. Thursday; 8 p.m. Friday and Saturday. Running time 90 minutes, no intermission. Tickets $27-$75 plus fees. Streaming of the production also is available. Visit gablestage.org or call 305-445-1119.

This entry was posted in Performances, Reviews and tagged Bari Newport, Bobby Eddy, David Meyers, GableStage, Jason Peck, Meredith Casey, We Will Not Be Silent. Bookmark the permalink.