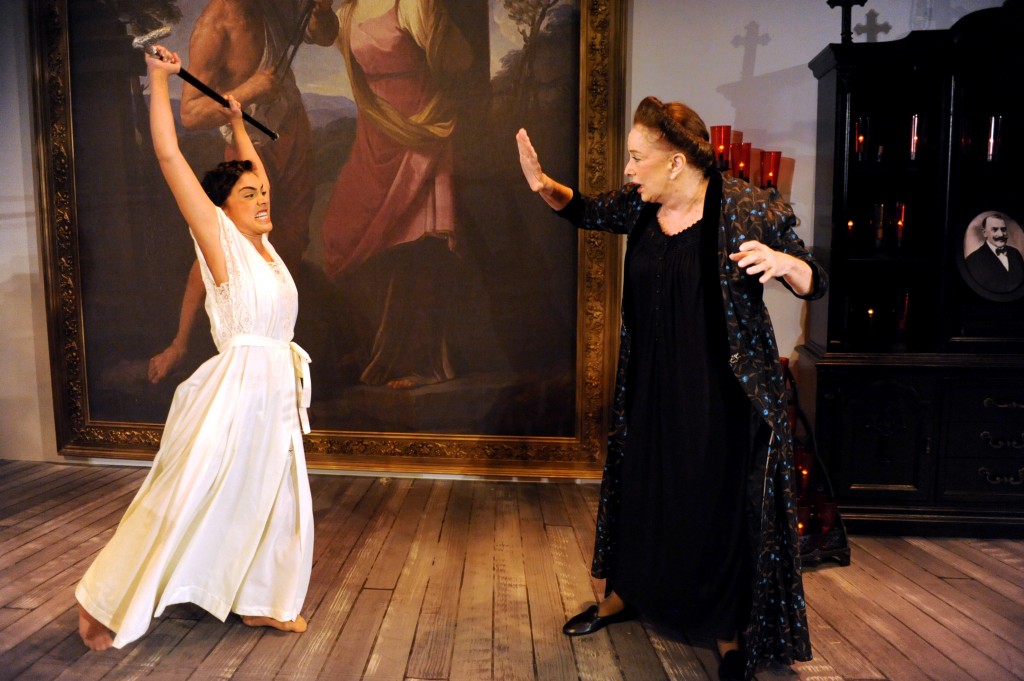 Connie Pantazis as Adela rebels against the tyranny of Isabel Moreno as Bernarda Alba / Photos by Justin Namon for WorldRedEye.com / Courtesy of the Adrienne Arsht Center

Ask anyone who’s played Hamlet: There is no shame is getting only two-thirds of the way up Everest. The House of Bernarda Alba, a masterpiece of world drama, is a Matterhorn that even the most skilled troupe is not going to master every night.

So render generous praise to a flawed but admirable ascent of Federico Garcia Lorca’s tragedy produced by the University of  Miami Theatre Arts Department and the Adrienne Arsht Center playing through this month.

Director Henry Fonte, three professional actresses and a supporting cast of promising young students have delivered a unique and mostly convincing rendition of this tale of parental oppression and carnal repression. It’s laudable for its visual sense, its depiction of the youthful preoccupation with flowering sexuality and its atypical layer of humor, which is welcome but ultimately undermines the final tragedy.

The humor wisely provides the doomed Alba family a slightly less dark place to begin their descent from. But the evening never recovered its sense of gravitas and some audience members were actually giggling during the harrowing climax on opening night. With the final procession of calamities paced too quickly for the actresses to make credible, the humor had distanced the audience too far to buy into the usually affecting melodrama of wails and breast beating in the last scenes.

The House of Bernarda Alba long ago earned its reputation as an emotionally seething and unbearably tense tale of family dysfunction.

Domineering matriarch Bernarda Alba locks her five daughters, doddering mother and tart-tongued housekeeper in their rural Andalusian home to maintain the honor of the family as they mourn the death of her husband – a period that the tradition-obsessed Bernarda vows to extend eight years. This convent/prison erodes under leashed and unleashed passions when the oldest daughter Angustias attracts a suitor desired by the youngest daughter, Adela.

But the mother is so confident in her authority that she rebuffs every warning that her suffocating mandates will prove destructive. As one servant says, “She is so proud that she blindfolds her own eyes.”  Later the same servant says off-hand, “I hope one day none of us are left to tell the story.”

The play’s themes are timeless starting with sexual repression, class prejudice and tradition’s straitjacket subjugation of women, which prompts that same servant to say, “To be a woman is the worst punishment.”

Over three swift-moving acts, the narrative is meant to be simultaneously suspenseful and brooding, claustrophobic yet epic with a poetic language and flash floods of emotions that can seem to teeter into melodrama to a 21st Century sensibility.

The play has been translated many times since being written weeks before Lorca’s  murder in 1936.  This 2005 script is by Karin Coonrod and Miami’s Pulitzer Prize winner Nilo Cruz (Anna in the Tropics), who is teaching at the school this term. Fonte noted that this is a true translation, not an adaptation as are many alleged “translations” by playwrights who don’t know the original language. Fonte said this edition’s focus was finding English wording that brings out the vibrant poetry in Lorca’s phraseology.

Fonte, the newly-appointed head of UM’s drama division, has guided the all-female cast to some commendable performances.

Most visible is the veteran stage and television actress Isabel Moreno, recently an aunt in Cruz’s world premiere of The Color of Desire at Actors Playhouse. Her implacable frown and corrugated knife of a voice communicate Bernarda’s Kelvin cold, unforgiving exterior that percolates up out of the depths of her soul. When she imperiously pronounces, “A daughter who disobeys is not a daughter. She is an enemy,” you fear for her children.

What Moreno doesn’t exude – thereby creating the other key weakness of the production — is the overwhelming toxic tyranny that should linger even after she leaves the room. Without that persisting anti-charisma, the aforementioned humor is never balanced out and the audience never feels vicariously oppressed or suffocated in the tragic third act.

But Moreno delivers one of the two superb acting moments in the production. She physically recoils when Alba’s insane mother can be heard offstage babbling nonsense, and her face twists with revulsion when the old lady totters into the room. Moreno depicts the class-conscious Bernarda’s humiliation at this public shame. At the same time, for the only time in the play, her face exposes stark fear, knowing this might be what she will become. It’s chilling work.

Another fine performance belongs to Elena Maria Garcia, one of the region’s finest comic actresses, who brings her finely calibrated talent to the role of the earthy, pragmatic housekeeper La Poncia who serves Bernarda precisely as the truth-telling Fool serves Lear. Garcia never goes over the top but she injects a leavening
working class humanity into the proceedings.

The UM students succeed at creating a history of sibling alliances and rivalries: Connie Pantazis is a fiery and lovely Adela, Amandina Altomare is the awkward Angustias,  Megan Kinney is Magdelena, Annette Hammond is Amelia and Rachel Lipman is Martirio. They are especially convincing in group scenes as they tease each other about their sexual urges just like young women at a sorority slumber party.

What they have a little trouble with is selling the credible cross of actorly passion and cold technique required by Lorca’s stylized poetic declamations. They occasionally sound false trying to make the heightened language sound believable.

It’s their passion that’s persuasive. The second stunning moment of the play occurs when Pantazis’ Adela is told that her older sister is engaged to the young man who she is in love with. Fonte and Pantazis allow Adela to register and communicate profound shock and betrayal through stunned silences that indicate a world frozen on the brink of tragedy.

Edna Schwab has the thankless – and arguably dispensable role – as the dotty grandmother. But her scenes clutching a toy lamb and whimpering are appropriately pitiful.

Again, what really works with no asterisks is Fonte’s striking visuals. He arranges his cast like an artist composing a family portrait.  This comes clear from the first time the mourners file into the room like a military formation of black crows wearing lace shawls, then line up on their knees in two rows to pray and cross themselves. The skill remains on view to the final vision of the daughters in white nightgowns kneeling in grief around the unbowed black hulk of their indomitable mother, still deluding herself about her lack of culpability. Most are not static tableaus; Fonte keeps the actresses busy, folding sheets, embroidering, clearing away dinner dishes.

But perhaps the strongest element in Fonte’s coordination of the evocative work of the design team.

K. April Soroko creates an austere high-ceilinged room with beige walls, dark doors, a polished wood plank floor, thick wooden timbers for a roof, scores of red glasses holding lit votive candles and a two-story post-Renaissance depiction of a female martyr being tortured to death by a handsome man. Crucially, the room does not contain a single right angle; everything is slightly off as if the oppressive forces were giant hands twisting the room askew.

Lighting designer David M. Upton has painted the scene with changing hues from harsh daytime yellows to cool evening blues. Michael Matthews creates an offstage world with his sounds including a procession of men whose signing can be heard moving around the outside of the house.

If this production is not the excoriating emotional experience it could be, Fonte and company deserve high marks for a thoughtful and intriguing evening of theater.