The Importance Of Dreams: Waitress On Tour’s Poignancy 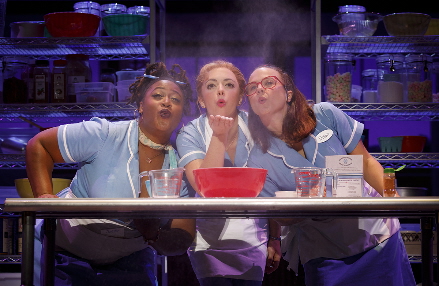 The importance of having and pursuing dreams sounds like the facile catch-phrase intoned in a television trailer for the newest pre-teen Disney movie about female empowerment. But the cast and creative team of the musical tour of Waitress wipe away the shallow lip service and delve deep into the complexities and emotional truth of how dreams do and should form the backbone of life.

This Broadway Across America production at the Broward Center arguably is even brighter and more deeply felt than the 2016 version still running in New York; its lead Desi Oakley is better in her own way than the celebrated Broadway lead Jessie Mueller.

Fans of Adrienne Shelly’s 2007 poignant film will find most of what they cherish, but this is a Broadway musical. It’s a different art form with different requirements but different gifts as well, starting with characters singing their inner feelings with more specificity than a longing movie closeup can provide.

The quietly buoyant tale of small town denizens seeking fulfillment centers on the warm, intelligent and resilient Jenna. She’s a thirty-something waitress working in a diner in the South that doubles as the community’s nexus. The diner’s strongest bragging point is the seeming endless parade of Jenna’s pies, a talent she learned from her dearly-missed mother, confections with names like humble crumble rhubarb pie or devil’s food oasis pie.

The news that she is pregnant horrifies her because she is married to the abusive goat-roping ne’er-do-well Earl who commandeers all her money. Her marriage has gone dry but Earl refuses to let her have a car that he intuits will allow her to escape, even refuses to let her compete the region’s pie contest because the prize money and resulting self-confidence would allow her to leave him.

She falls into a passionate, fulfilling but very quirky affair with the new young ob-gyn Jim Pomatter, a fish out of water from Connecticut. Her ambivalent feelings about the pregnancy and motherhood leads her to commiserate with her colleagues the insecure Dawn and the ebullient Becky who have their own relationship issues. How this sorts itself out makes for a lovely discovery of self-worth and independence.

With warmth and compassion, this Waitress is devoid of the slightest condescension toward the characters and milieu, even the most eccentric and slightly cartoonish denizens. No one imbues a rosy haze to the downsides of these lives nor are they subtly overpraising the virtues of the simple life, although there’s a whiff of musical theater fairy tale. Most of these citizens are just good, decent people.

What comes across at least as well and maybe even more strongly than the original stage version is the characters’ almost physicalized wistful yearning for a more fulfilling existence. These people know that life is not what was promised, let alone what was dreamed, or even what parents hoped for them. One character says, “I haven’t felt anything in a very long time” and another responds to the query are you happy: “Happy enough; I don’t get much; I don’t give much.”

The quiet disappointments that life seems to have are an unchallenged and accepted fact of life. Which is what makes everyone’s Act II victories bittersweet or unalloyed so uplifting.

This is what the breathtakingly beautiful Oakley delivers so well: Jenna’s inner beauty and profound aching for a better life. Yet, and this is key, Oakley’s Jenna struggles with the almost certain knowledge that dreams do not come true, that compromise is as inevitable as sunrise and that perpetual disappointment is an inescapable aspect of being alive.

As good as every cast member is – and they are really good – the musical has a trunk of other virtues. There’s an insightful eclectic score by Broadway neophyte but popular singer-songwriter Sara Bareilles that ranges from Reba McIntire-style numbers to Bareilles’ unique folky pop vibe, all played by an on-stage country-western quintet.

The secret weapon is the tone established by that score, Jessie Nelson’s deft adaptation of the Shelly’s script, inventive choreography/staging by Lorin Latarro and the direction by Diane Paulus, best known for revivals of Pippin, Hair and Porgy and Bess. Granted, in the film, the turning point near the finale is perfectly believable, although it’s not quite so credible on stage.

Paulus, known for more flashy stylistic productions, reins in the showmanship except in the production numbers, but she smoothly eases scenes into each other like sweet batter. Jenna escapes the pain of her life by going to the kitchen of her mind to whip up her next dream pie. Ensemble members  drop ingredients into her waiting hands as if they appear by magic. It is so precisely and crispy executed that it is illustrates how stagecraft can use its own vocabulary to substitute for screen magic.

But this cast: Oakley (Hello from Doo-Dah) is a real find with a gorgeous flexible soprano, a visage that reflects a wide range of emotions and an inner glow that needs no spotlight to pick her out of a crowd. Bryan Fenkart is a wonderfully goofy love interest and Jeremy Morse has the scene-stealing role as Dawn’s endlessly quirky swain Ogie (they share a passion for Revolutionary War reenactments). Lenne Klingaman and Charity Angel Dawson well-earn their own show-stopping “I am” numbers that create a distinct and credible Dawn and Becky.

Most of the actors have been together since October, but there is not a hint of staleness or boredom; instead, they have a palpable chemistry. And when the three woman sing together in harmony, it’s the aural equivalent of watching sugar and butter stirred into a scrumptious batter of mutually supportive sisterhood.

Watiress runs through April 22 at the Broward Center for the Performing Arts, 201 SW Fifth Avenue, Fort Lauderdale, as part of the Broadway Across America series. Performances are 8 p.m. Tuesdays through Saturdays; 2 p.m. Saturdays; 1 p.m. and 6:30 p.m. Sundays. Runs 2 ¾ hours including one intermission. For tickets visit www.browardcenter.org; by phone 954-462-0222.