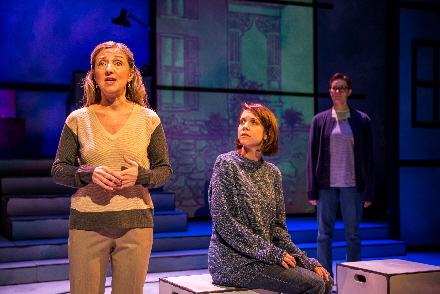 The stirring musical Fun Home is a detective story in which the mystery is never solved, but the investigator comes to terms with the existence of the enigma.

What Zoetic Stage’s triumphant production does better than the Tony-winning production is its depiction of the unalloyed joy and bottomless agony of discovery in that journey.

The discoveries center on recognizing and accepting one’s sexuality – or uncovering the tortured anguish of those wrestling with those same issues. Our heroine Alison, a lesbian graphic novelist looking back from age 43, stands outside reveries of her past seemingly seeing them clear for the first time, sometimes with wry bemusement, sometimes with clinical dispassion, and finally with compassion for herself and her deeply troubled parents.

But if Alison might appear almost an outside observer, Zoetic’s superb cast forged by director Stuart Meltzer and musical director Eric Alsford rip unguarded passions from the marrow of the characters and cascades pungent emotions so palpable you can almost touch them.

It’s a fluidly time-shifting memoir in which Alison looks back on her childhood and college years when her closeted father may have committed suicide just as she discovered her sexuality.

Playwright Lisa Kron (Well, 2.5-Minute Ride) and composer Jeanine Tesori (Violet, Shrek, Thoroughly Modern Millie and Caroline, or Change) based their work on the 2006 graphic bio-novel by Alison Bechdel. The comic book genre as a source may be a first unless you count It’s A Bird It’s A Plane It’s Superman and Spiderman: Will Someone Turn Off The Light Before They Leave.

Anna Lise Jensen, outstanding as Clara in Zoetic’s Passion and transcendent in Slow Burn Theatre’s Bridges of Madison County, is pitch perfect as the present-day Alison looking back at her 10-year-old self (the precocious Alexa Lasanta fresh off The Secret Garden) and her college freshman incarnation (the luminous Kimmi Johnson who was a standout in Main Street Players’ Bad Jews).

Alison has reached the same age as her father was when he may walked in front of a truck, although his intent has always been a mystery. Her father Bruce (in a career-defining high for Nicholas Richberg) was an English teacher and a funeral home director with an obsession for restoring fine home furnishings. Alison’s ruminations are sparked when she discovers some of Bruce’s life-defining possessions.

Alison narrates as the play delves into her small town childhood with a seemingly picture perfect family including her mother (a simply brilliant Jeni Hacker) who we learn has closeted her pain for decades over her husband’s infidelity rather than his sexuality. Alison often follows around characters like an invisible shadow, such as reading aloud the breathless diary entry of her young self at college and wincing at her social clumsiness.

Kron weaves all three eras together seamlessly so that each comments on the others – especially the sad knowledge or blithe ignorance of what comes next.

Certainly, the show examines the dysfunctional ways people dealt with sexuality through the 1960s and 1970s, and how accepting orientation is spiritually healthier than denial or secrecy. But the musical is far more universal. Anyone can vicariously plug into Alison’s attempt to make sense of her past and how it may or may not have formed her. It speaks to the struggle of generations to understand those who came before them. By that understanding, we find forgiveness for their shortcomings that we did not comprehend as children and young adults, but which we appreciate as we age, the gift of being a maturing evolving human being.

The father’s death is saved for the last scenes, hanging over the evening like the inevitability of mortality itself. Yet Fun Home is indefatigably buoyed by a wry self-effacing wit and a warm comfort that the passage of time often surrenders that understanding but not closure. After love, perhaps compassion is the highest virtue of humanity. That tender melding of sympathy and forgiveness for human failings and their resulting tragedy suffuse the evening.

The aforementioned mysteries – there are several and they interlock – include whether Bruce actually committed suicide, did Alison’s revelation to her parents push him over the edge, how did his closeted sexuality affect his daughter’s discovery and visa versa, and several others. 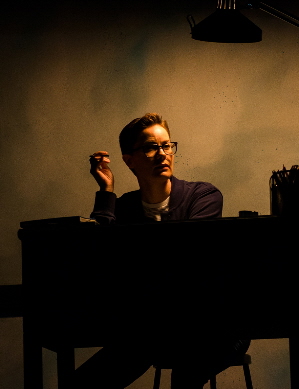 Aside from the mannish haircut, Jensen’s Alison is not a stereotype but her own unique person. Even fighting a malfunctioning microphone opening night, Jensen injected Alison with three fully-limned dimensions. She is especially effective in the penultimate scene when she takes collegiate Alison’s place (and her discernably different youthful persona) in a final car ride with her father during which both struggle in vain to talk about all those mysteries.

But the simply stunning achievement is Richberg’s. A founding member of Zoetic, he has scored over and over as Black Stache in Peter and the Starcatcher, Booth in Assassins, as Tennessee Williams in Billy & Me, and the brother in The Caretaker. Those varied roles’ only commonality was a glowing vitality.

But here, his father is a masterpiece of expressive acting, singing and acting-singing. He effortlessly slips into the skin of someone uncomfortable in his own skin. Arguably better than Michael Cerveris on Broadway, Richberg’s Bruce is sensitive, shut-down, controlled, mercurial, loving, distant – and above all haunted. His Bruce twirls in the space of seconds to express love, lust, pride, fear and shame. When Bruce cuts loose in his meltdown finale, the psychological twisting in on himself exudes emotional torture and confusion. It is a bravura performance that remains unswervingly naturalistic.

Hacker has fewer scenes but is just as good. Again, her pain is much more evident early on than in other productions. When she tries to explain to Alison her acquiescence over decades – how it just slipped into “Days and Days” – Hacker’s performance would stop the show if the drive of the piece at that late point allowed it.

Johnson, with her apple-cheeked fresh face and glowing grin, endearingly inhabits the awkward social confusion of being 18. Her joy-filled rendition of discovery her sexuality is ebulliently expressed in her paean to her new lover Joan (the wonderfully droll Hannah Benitez). The role might seem simple on paper, but Johnson gives her Alison dimensions and truth.

Lasanta is fine as the young Alison, especially in her song in which she describes how she discovered a new kind of beauty in the mannish woman delivering a package. Filling out the cast are Jonah Robinson as various objects of Bruce’s lust, and Nate Poses and Brayden Labgold-Carroll as Alison’s younger brothers.

The cast has a chemistry so seamless that it does not call attention to itself. Several have played together: Jensen, Richberg and Hacker were the leads in Zoetic’s Passion; Johnson and Benitez were in Bad Jews, and Johnson was in the ensemble of Secret Garden with Lasanta.

Meltzer once again brings out the emotional core of a piece. He also creates the most fluid staging while keeping the changing fractured time periods crystal clear. Especially notable is how he uses three turntables, such as having a turntable move a standing figure away into the shadows or having parents rotate in an endless cycle during an argument. In the New York version, Bruce and wife Helen’s anguish was less palpable until the final scenes, but Meltzer wisely allows it freer rein in this edition and thereby making the conflict clearer.

Those turntables are part of the evocative visuals ranging from Rebecca Montero’s crucial scene shifting lighting to Michael McClain’s set that resembles a grey sketch pad broken up into panels with charcoal black pencil lines. Greg Duffy and Michael McKeever, as they did in Sunday in the Park With George, populate the blank panels on the back wall with animations of Alison’s illustrations echoing the memories on stage. McClain’s uses a proscenium model as it was at the Public Theater off-Broadway as opposed to the in-the-round configuration at Circle In The Square on Broadway.

Kron’s brilliant lyrics are often skillfully indirect, even deceptively bland as no one frankly faces their inner feelings. But their confused angst and buried subtext is as clearly indicated as if there were supertitles. At the same time, Kron’s natural bent toward humor is evidenced over and over such as when the suddenly liberated freshman Alison sings that she’s “changing her major to Joan.” Or when the three children make up a Jackson Five-like television jingle to advertise the family business, nicknamed in-house “Fun Home.” Or best of all, a fantasy of family harmony with the ensemble singing a kind of Partridge Family number.

Tesori’s glorious music echoes latter-day Sondheim and Adam Guettel, but in the end it’s like no one else’s, rapturously melodic with idiosyncratic rhythms and structure. Banked passion exudes from most numbers until emotions overflow in the final scenes. It is in part why Kron and Tesori justifiably were nominated for the Pulitzer Prize in Drama in 2014. It could not better served than by Alsford and his usual suspects band—Roy Fantel, Martha Spangler, Gary Gottfried, Elena Alamilla, Sandy Poltarak and Lluba Ohrimenko.

After several at least four years in workshops and tryouts, the musical bowed off-Broadway in 2013 earning several Obie awards. Then in 2015 it opened on Broadway where it won five of its 12 Tony nominations including best musical.

Like the equally moving but edgy Next to Normal, Fun Home had a national tour but tour producers apparently felt neither would sell in South Florida, so it was never scheduled here. So once again, as with Next to Normal, it required a local regional theater to champion the piece – in Next To Normal’s case by two different companies.

It took Zoetic’s courage to bring this piece to South Florida and lovers of great theater should be grateful.

Fun Home from Zoetic Stage as part of the Theater Up Close series performs through May 13 in the Carnival Studio Theater at the Arsht Center’s Ziff Ballet Opera House, 1300 Biscayne Boulevard, Miami. Performances are at 7:30 p.m. Wednesday-Saturday, 3 p.m. Saturday; 4 p.m. Sunday. Tickets are $50. Running time is 1 hour 40 minutes with no intermission. (305) 949-6722 or www.arshtcenter.org. 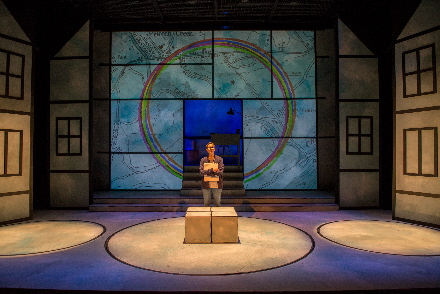