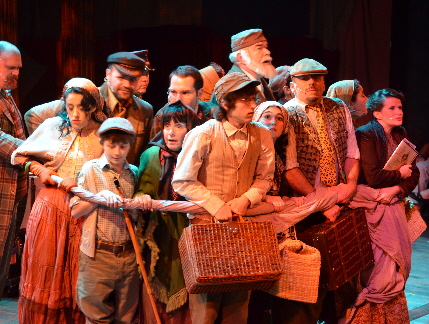 As the season heats up once again, we enter a period with many openings in the same week and many throughout the month, as well as announcements of next season’s schedules. That means reviews will only be in the top four positions for four or five days or less. To see earlier reviews, check out the red ribbon at the bottom of the page entitled “Reviews” or click the “Reviews” button in the white on teal strip at the top of the page.

Give a round of applause to a theater that takes on a challenge, especially with its fan base of South Florida audiences who are notoriously suspect of anything that isn’t a Rodgers and Hammerstein musical.

The good news is, it is wonderful to see creativity in approaching a work that isn’t usually staged; the bad news is, when it doesn’t come together, all of the inventiveness is lost.

Such is the case with The Plaza Theatre’s mounting of Rags, a production that played on Broadway for an embarrassing four performances, closing two days after it opened on Aug. 21, 1986. The show had more previews than performances — 18 to be exact.

But Rags has never disappeared; there are at least 10 scripts floating around. The founder of The Plaza Theatre, Alan Jacobson, produced the show previously at the Florida Jewish Theatre in West Palm Beach. His wife, Melissa Boher Jacobson, played the lead character of Rebecca in that production 18 years ago and reprises the role here.

The plot concerns Rebecca (Boher Jacobson), a Russian immigrant arriving at Ellis Island with her son, David (played by Eli Jacobson, Alan and Melissa’s son). Her husband, Nathan (Randy Charleville) is to meet her upon arrival — he had left for America six years before; but he doesn’t show. She’s forced to fend for herself and her son and goes to work in a sweatshop. Of course, there’s no question that Nathan will show up at some point.

The version of the script that the Plaza Theatre chose was close to one that was presented in 1991 at the American Jewish Theatre, although this production had some doctoring done to it, too. Jacobson hired Richard Sabellico, who directed the American Jewish Theatre incarnation, to rework the script. It is apparently more streamlined than earlier scripts, which were criticized for being overly complex.

Rags began as an idea initiated by librettist Joseph Stein, who had a producer request that he write a sequel to his show Fiddler on the Roof, which would describe what happened to Tevye and his family after they left Antavka and came to America. (You can see the Teyve character in Avram, for sure). But as Stein worked on the show, it evolved to be about a different family, and he changed the focus to the struggles faced by an immigrant woman ending up alone in 1914 America. Charles Strouse, known for the hit musical Annie, created the music, while Stephen Schwartz (Wicked, Godspell) authored the lyrics.

The Plaza Theatre’s production not only carries the baggage of a book that gets caught up in some of the most clichéd characterizations of immigrants to Ellis Island, but the directing and staging itself has its share of missteps. Some of the problems include a cast that ranges from professional caliber to amateur theater talent, which all adds up to a less-than-polished feel.

And although the Plaza scaled it down from the original large cast of 30 to 15 players, it feels as if the vision was of a sprawling grand Broadway proscenium show, rather than more minimalistic, which would have eliminated much of the confusion on stage. There seemed to be a constant barrage of pieces being moved around and a sense that players were constantly, almost frenetically, coming and going.

Andy Rogow’s direction didn’t add any cohesion and musical numbers seemed less than smooth, especially when a large group was required to be on stage at one time. Kevin Black’s choreography looked challenged on the small Plaza stage, which had overly large set pieces (and something that looked like a Christian cross at the top) by the usually spot on Michael McClain.

Stand outs in the cast were Bramble as Avram, the ever reliable Mike Westrich as wide-eyed Ben, Byer who was delightful in her spotlight song, Three Sunny Rooms, and Sheira Feuerstein who brought a strength to the thinly drawn role of Bella.

Cichewicz possessed a great voice, but his characterization of Saul remained on one level – headstrong and arrogant. Boher Jacobson as Rebecca fell into the same trap of not finding a requisite range of softness. When she sang one of the best numbers in the show, Blame It On A Summer Night, the words are sultry but Boher Jacobson downplayed the steam. It was a perfect opportunity for the audience to see emotion, but it never materialized. Her vocal arrangements should have been lowered a key as she struggled a bit with the higher register of some of the songs.

A big embrace to the Plaza and Alan Jacobson for the determination to try to make a dreamcoat out of Rags. Unfortunately, it requires a bit more alteration.

Rags is playing through March 16 at the Plaza Theatre, 262 South Ocean Boulevard, Manalapan. Shows at 2 p.m. Wednesday, Saturday and Sunday; 7:30 p.m. Thursday, Friday and Saturday. Running time is 2 ½ hours with a 15 minute intermission. For tickets call (561) 588-1820 or visit www.theplazatheatre.net.