Thinking Cap’s King Lear Is A Study In Imagination

Posted on November 8, 2018 by Bill Hirschman 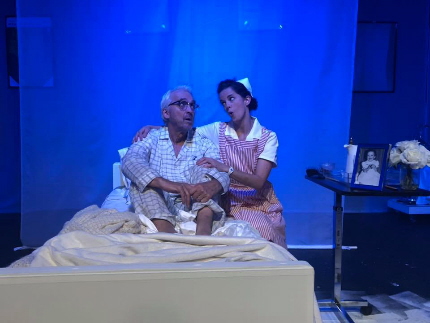 It helps that Galman delivers William Shakespeare’s poetry like the masters – think Ian McKellen, Sir John Gielgud. There isn’t a word that isn’t sacrosanct. He relishes the work, and, in turn, audiences will, too.

Director Nicole Stodard also has a respect for The Bard’s work, and keeps the language intact –King Lear was written in 1605, and Lear is lifted from the dark ages into a more modern time period.  We’re not exactly in the 21st century, more 20th century, but nothing year specific – there’s a Hitchcockian feel to it, a bit like Rear Window, circa 1954. The whole production has that ambiance, giving it a crackling suspense of noir.

OK. A quick primer on King Lear: When we first meet the King, he’s dividing his kingdom among his three daughters. Lear, a bit like a modern politician, lives for praise, and expects it. He advises that he’ll allot each daughter their due (in this case, land) based on the depth of the speech on which she proclaims her love to the old man.

Goneril (Jessica Farr) and Regan (Casey Dressler) are like the evil stepsisters in Cinderella, fawning and basically b.s.’ing dear old dad to get what they believe they deserve. Goneril’s husband, the Duke of Albany (Joshua Josey) sees right through it, too. Cordelia (Bree-Anna Obst), the youngest daughter, the most sincere in her love for her father, refuses to make the speech and is cast out.

The two sisters are full of it, and don’t give two “you know what’s” about Pops. They mock him and undermine him. Then there’s The Earl of Gloucester (Jim Gibbons). He has two sons.  Villainous illegitimate son Edmund (Zack Myers) sets up the other full blooded son, Edgar (Seth Trucks) to make their father believe that Edgar is deceitful. Regan’s husband, the Duke of Cornwall, played here by Carlos Alayeto, (in Stodard’s production he could be a Mafia hitman), gets involved in this wicked game, too, as he gouges out Gloucester’s eyes.

The madness of King Lear has been depicted for centuries – audiences come along for the roller coaster ride with the once powerful ruler as he descends into the darkness of losing his mind.. The sensitive subject resonates with today’s generation of caregivers dealing with or having dealt with someone close to them suffering from Alzheimer’s disease or a form of dementia.

Art imitates real life as seen in the authenticity of the direction and in Galman’s slow decline. He isn’t the caricature many times drawn of someone with Alzheimer’s or dementia – the aggressive, mean crazy loon who is completely lunatic. Galman’s Lear tries to keep it together, convince himself he’s okay so that everyone around him will think that, too. Yes, true to life.

In one particular scene, the daughters argue over who’ll take the old man in when he can’t stay in the big house by himself anymore. Written how many centuries ago, those conversations are happening in households where adult children are dealing with aging parents.

Suggesting the king’s sickness, a servant (Carey Brianna Hart) is dressed as a nurse, and the Earl of Kent, one of Lear’s oldest friends, played here by Steve Carroll, is dressed like an orderly.

Those are just the kinds of unique touches and a different understanding of the text that makes this production so engrossing. There are many highlights be it in the delivery or the interpretation, but one to note occurs when Lear says in Act 4, Scene 5 to the now blind Gloucester, “Get thee glass eyes, and like a scurvy politician seem / To see the things thou dost not,” the audience collectively winks at the current state of U.S. political affairs.

In one entertaining and utterly imaginative element, Obst plays another role in addition to Cordelia; as the King’s dedicated Fool, here dressed like a Candystriper. In Shakespeare’s time, the Fool character was meant to entertain the crowd, much like a clown might in a circus. The Fool, a jester, too, for the audience, but as it was in royal houses long ago, the King engages the full time comedian for his own amusement own.

Here’s where Stodard once again puts a spin on things. Is the Fool real, or is it a figment of Lear’s imagination? Part of his hallucinations from his dementia?

More cleverness, too, as the recitation of the Fool’s lines are sung to Beatles’ tunes or making the Fool a bit Shirley Temple-esque as Obst sing-songs Shakespeare’s prose to the tune of “Animal Crackers in My Soup.” This character is a true original and Obst brings her own touches to it that elevates the character even further. It’s a delight.

There is so much to take in and it all works beautifully, including the musical direction of Kevin Black and violinist David Guevara playing a score of Beatles music that many times gives its own commentary on the action: “Fool on the Hill,” “Nowhere Man” and “When I’m 64.”

There is only one fault within this majestic re-imagination, however, and it is how weak the subplot seems compared to the main narrative of this production. The secondary characters and their problems undermine, almost take away from how eloquently rich the main story is. The characters are a jumble of confusion. What are they fighting over? And why do we care? The secondary story just lack intention and purpose and seems such a contrast to a main plot that is so layered and nuanced.

The actors, however, are deeply committed to trying to sell the secondary story, and do so as an ensemble — Dressler, Farr, Myers, Trucks, Alayeto, and Josey, which helps keep the interest. It must be acknowledged that the entire cast easily commands the challenge of performing Shakespeare. Not an easy feat, especially when there are so many new twists and turns to wrestle with in a version such as this.

The real star of this production, though, is the artistic vision and Thinking Cap’s originality is a royal win indeed. 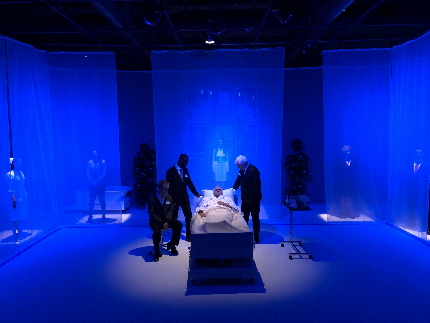