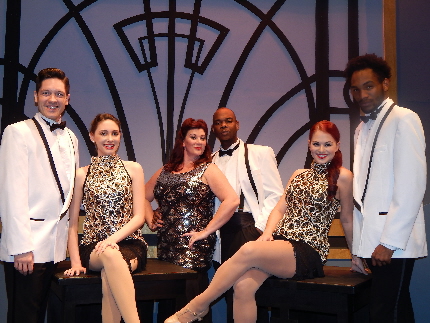 That talent is, indeed, solid: the mellow baritone of Don Seward, memorable as Coalhouse Walker in Actors Playhouse’s Ragtime; the smooth chanteuse sound of Sharyn Peoples; the lively tenor of dancer Danny Durr; the sloe gin fizz soprano of Alexandra Van Hasselt, the stylings of slender Elijah Word, and last, but not least, the low smoldering voice and outstanding terpsichorean chops of Emily Tarallo who is quickly becoming one of most high-profile dancers in the region.

Among many standout moments are Word giving a Calloway smooth “Minnie the Moocher” as Tarallo struts and shimmies with a scorching sexiness. Another is Peoples and Seward’s scat duel in “Hep, Hep, The Jumpin’ Jive”

An equal partner is the band, headed by recent Nova Southeastern University grad Friedman on piano (who gets to perform “Rhapsody in Blue” and “I Love A Piano” as solos), plus the old pros Rupert Ziawinski slapping that upright bass and the virtuoso jungle drums of percussionist Roy Fantel, both of whose beaming faces show they relish being in their element. Bagby has done an enviable job blending the voices like a master chef.