Betty Buckley leads the waiters in the national tour of Hello, Dolly! / Photos by Julieta Cervantes

There’s not much in life that you can say this about, but the national tour of Hello, Dolly! is everything you hope it will be.

For anyone under the age of 50 who wonders if the so-called Golden Age of Musicals was, in fact, all that Golden; for those wondering exactly what it was like to sit in an audience at that point in popular culture in 1964; for those who have seen Hello, Dolly! about three times too often – this is for you.

The nova-bright, parade-brassy, high kick-strutting Broadway Across America production criminally sitting down for not even a full a week at the Arsht and soon at Kravis is a flat-out unadulterated pleasure. Miraculously, this edition seems impossibly fresh for a show most audience members can sing along with even in the secondary numbers.

This tour is based on the 2017 rapturously-received revival, first starring Bette Midler and then Bernadette Peters with Donna Murphy filling in on and off.

While heavily influenced by the original staging by director-choreographer Gower Champion touching on all the essential iconic visuals, this one carries the clear stamp of that master director of musical comedy Jerry Zaks and the choreographer Warren Carlyle.

But the headline here really should be about the stars Betty Buckley and Lewis J. Stadlen who deliver this early holiday present with all the candle-power and verve that anyone could ask for.

We did not see the New York revival. But we’d make an intuitive bet that it was nearly impossible to forget you were watching Bette or Bernadette playing Dolly, although both are legendarily talented and committed performers.

So what makes this production special is that Betty – despite memorable performances in stage and TV screen –– doesn’t have that indelible singular image.

That allows her and this edition to be about the impeccably constructed Jerry Herman-Michael Stewart-Gower Champion raw material.  Buckley is the star, with enough wattage to not need a spotlight, but she is not a “star” appearing in Hello, Dolly!, but instead it’s the actress Betty Buckley playing Dolly Levi.

She doesn’t just embrace the role, she lives inside it, especially incarnating Dolly’s inherent celebration of life in the Dear Ephraim monologues or the exhilarating anthems of resurrection like “When the Parade Passes By.” She still can belt out a number like she did in Sunset Boulevard or caress the meaning like she did in Cats or simply charm as she did in 1776.  To be fair, she dodges some notes at the top of the register, which kindly have been dropped a notch in the orchestrations. But she has the knowledgeable stagecraft and innate charisma to command the stage from the second she drops that newspaper she’s reading on the trolley.

The other huge asset here is Stadlen. If you are a theater nerd, you know Stadlen from a dozen roles on stage, film and television.  If not, you will recognize his face. And if not then, trust me, you will know that inventive delivery that once was the mainstay of Broadway comedy in the 20th Century.

When he played Horace two years ago at the Lee Roy Reams-as-Dolly production at the Wick Theatre, this is what we wrote and we couldn’t say it better now, only to emphasize that he has only gotten even better at it with Zaks’ direction:

“But the finest performance comes from veteran Broadway actor Lewis J. Stadlen, who is arguably the funniest Horace Vandergelder we’ve seen. You may not recognize his name, but you’ve seen him on stage, film and television for decades; if you saw The Producers on the road, the odds are good he was playing Max Bialystock. Stadlen does not imitate so much as synthesize the tropes of great comic actors of the past such as George Burns, Zero Mostel, Groucho Marx and the part’s originator David Burns. His creation of the curmudgeonly small-town merchant prince is clearly in a class by itself in this production with every furrowed brow, every ten-penny nail-chewing utterance and the drily delivered precision punchlines of a vaudevillian of yore.”

There’s a moment when Vandergelder is wooing Irene and he gives her a box of chocolate-covered peanuts. The humorous line is written. Horace adds with an expectation of appreciation that they are “unshelled” meaning the expensive kind. But Stadlen delivers that one word with a topspin that is especially hilarious.

There have been many fine Vandergelders, but it’s arguable that Stadlen’s is one of the first to be an equal player in the piece with whomever is playing Dolly. He provides her with a formidable challenge rather than some doomed to her will even before the curtain rises. It is a role he has spent his life prepping to play at this level.

Every other performer’s comic timing, including Buckley’s, has been honed to a knife sharp edge by Zaks. Similarly, Carlyle’s prancing pony leaping choreography would make Champion proud.

Inexplicably, the only slight sag in the entire evening is, believe it or not, the title number. There is nothing wrong with it; it’s just never achieves the same thrill level as “Put On Your Sunday Clothes” or “The Parade Passes By.” Buckley, who is seemingly glows through the rest of show, just parades and strolls around the stage with a warm smile. Now, in retrospect, what made this scene work in the past is that many Dollies had that extra God-given something so special that they could simply stand on a bare stage and win over the house.

But otherwise, every aspect of the tour is outstanding. Savor a 32-member of solid cast members promenading in Santo Loquasto’s rainbow hued parade of fairy tale multi-layered period costumes with spangles, feathers, vests and, of course, hats. The spectacular 17-piece band (no stuffy orchestra here) led by Robert Billig has the long-lost power and heft of an old-time Broadway pit ensemble, and pumped into the auditorium in perfect balance with the voices. Loquasto also designed the sets which lean heavily on backdrops but which feel sumptuous.

Like Thornton Wilder’s original play, The Matchmaker, this Hello, Dolly!’s driving force is a mesmerizing woman whose unquenchable lifeforce is driving her back into being alive. Jerry Herman, reportedly in ill health for some time, lives in Miami. I wish he could see this one. 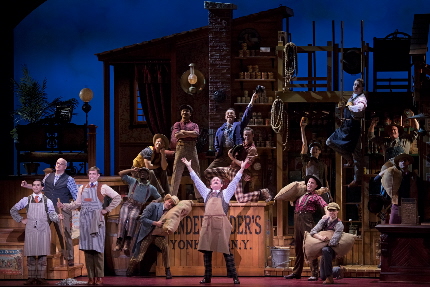 One Response to Welcome Hello, Dolly! With Bravura Betty Buckley